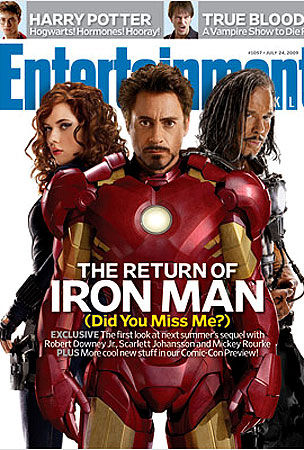 I remember before they showed “Jurassic Park” in theaters in the summer of ’93 they gave us a trailer for the upcoming “Flintstones” movie. Upcoming in the summer of ’94. Me in the audience: “Aren’t they getting a little ahead of themselves?”

Now that time-frame is the norm—particularly with journalism. “Now” is so last week, and “next week” is so five minutes ago. On Entertainment Weekly’s latest cover, we get Robert Downey, Jr., Scarlett Johnasson and Mickey Rourke with the headline “THE RETURN OF IRON MAN (Did You Miss Me?)” Miss you? Weren’t you here just last year? Ah, but I guess last year is so five years ago. Next year, when “Iron Man II” opens, is the new now.

The business of business is to speed up the assembly line, to push things through the system at a faster and faster rate, and in doing so, they’ve created a product that is not the product.

So we get food that is not food and news that is not news. This emphasis on ignoring what is, or has been, in favor of what isn't yet, feels like this to me: We can't stand ourselves.