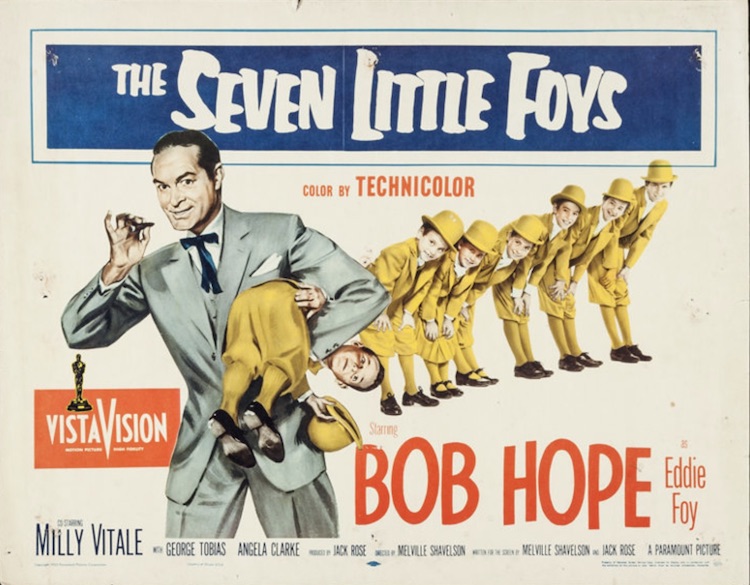 James Cagney won the Academy Award for for playing George M. Cohan in “Yankee Doodle Dandy,” and here he is a dozen years later playing him again in a nice tap-dance and soft-shoe cameo opposite Bob Hope’s Eddie Foy. My immediate thought: “Is this the first time an Academy Award winner for best actor reprised his role in another film?”

Turns out … not even close.

At only the second Academy Awards, Warner Baxter won best actor for playing the Cisco Kid in “Old Arizona.” Then he reprised the role in a 1931 short (“The Stolen Jools”) and a 1931 feature (“The Cisco Kid”). Then he played him again in a 1939 sequel (“The Return of the Cisco Kid”).

So if Cagney wasn’t the first, surely it was an anomaly?

Nope. Happened all the time. In 1930, George Arliss won the Oscar for playing Disraeli in “Disraeli,” a role he’d already played in a 1921 silent film, and to which he returned in a 1931 short. In 1933, it was Charles Laughton for “The Private Life of Henry VIII,” a role he reprised 20 years later in “Young Bess.” Spencer Tracy was Father Flanagan in “Boys Town” and three years later in “Men of Boys Town.” Bing Crosby was Father O’Malley in 1944’s “Going My Way” and a year later in “The Bells of St. Mary’s.”

OK, so not first and not an anomaly. But maybe the last?

You can see most of the Cagney-Hope dance number here. It’s cornball but fun. There’s a showbizzy, tongue-in-cheek one-upmanship between Cohan and Foy throughout:

Cohan: You know any of my soft-shoe routines?
Foy: I know all your routines—I did them first.
Cohan: And I did them right.

As apparently in life? Or at least as in “Yankee Doodle Dandy,” where the Foy cameo was played by Eddie Foy, Jr., and where they also engage in the same kind of back-and-forth. In the video clips from “Foys,” you can see Hope giving the dances the old college try but he can’t compare to Cagney. Just look at their arms. Cagney’s are perfectly balanced while Hope’s are all over the place. Cagney lost 15 pounds for the role and looks great. He was also in agony. His knees had filled with fluid from practicing, and when he jumped onto the table he felt a stabbing pain in them. But he kept going. He did it all gratis, too. From John McCabe’s biography:

When Jack Rose, The Seven Little Foys producer, first approached Jim about his salary for the job, he refused payment, not only as a favor to Hope but as a contribution to the memory of Eddie Foy: “When I was a starving actor, I could always get a free meal and a friendly welcome at the Foys. You don’t forget things like that.”

I would’ve liked more on that story. Did he know them personally or was it a known thing that the Foys helped out? And was it just the Foys or other successful show-biz types? Cohan and Foy were legendary to the young Cagney and Hope, and still well-known in the 1940s and ’50s, but now we mostly know them through the portrayals of Cagney and Hope. Our storytelling moved on to movies and TV, which they didn’t do, and so they’re left behind. As we’ll all be left behind.

It’s not really Foy’s story. It’s Hope schtick placed on Foy’s story. Foy was married three times, for example, and here he’s portrayed as marriage-averse. Almost women-averse. Early on, a buxom showgirl comes onto him but he passes. “I travel light—which is more than I can say for you.” An Italian sister act joins the troupe and he’s asked to switch his largeish dressing room for their tiny one. They don’t speak much English, the manager says. “Just enough to get top billing,” Foy responds. In her dressing room, the younger Italian sister, Madeleine Morando (Milly Vitale), who becomes Foy’s wife, his second in real life, wears a little frou-frou undergarment that makes the most of her tiny waist. In Milano, she says, we wear this all the time. Foy: “No wonder Italy’s overpopulated.”

Gotta ask: Were Italian actresses Hollywood’s greatest 1950s import? I’d never heard of Vitale before but good lord is she gorgeous. The oddity in the movie is that she has to land him. At the time of filming, she was 21 and gorgeous while Hope was 51 and not, but Hollywood was Hollywood. The age difference is also apparent in the sister act. Angela Clarke plays Clara, but she’s 23 years older than Vitale. Her role is basically to be nag Foy. Nothing he does is good enough. She’s older sister as mother-in-law. That gag.

Bert Williams, a Cagney favorite, is mentioned twice. Character-actor George Tobias, playing Jewish here—Barney Green, Foy’s manager—mentions in passing “I’m the fella who discovered Bert Williams.” Then, in the rain, trying to woo back Madeleine, Foy talks up Williams’ song “Nobody” and sings it. The conversation leading up to it is interesting for demonstrating Foy’s shallowness:

She: You are so empty
He: All I want is my name in lights
She: Nothing else?
He: What else is there?
She: The rest of the world.
He: What have they ever done for me? You ever hear that song that Bert Williams sings? When life seems full of clouds and rain, and I am filled with naught but pain, who soothes my thumpin’, bumpin’ brain? Nobody

At this point, he just wants her to sign a contract so they can be on Broadway together—so he can be on Broadway—but she wants him. As a man. As a lover. Sure. So she signs. Then, scared of the commitment, of maybe falling for her, he tears up the contract and goes to the west coast while she goes back to Italy. Problem solved. Except she writes him a letter, saying she’s marrying someone else, and he travels to Milan, kinda proposes, and…

Beav to Bud
In the movie, Foy takes the kids on the road when his wife dies, but that’s another fabrication. The wife died in 1918; the Seven Foys act began in 1910. So why did it begin? Because it worked? And what exactly was Eddie Foy’s bit anyway? He was primarily a comedian, right? With a kind of slurring thing and an odd upturned smile? “Seven Foys” was supposed to be Hope’s turn toward more dramatic roles but we mostly get Hope being Hope. His persona here isn’t that different from the one I saw on Christmas specials in the 1970s. But the jokes are better. Or maybe, being so long out of style, they seem new again.

Another interesting pop-cultural note: The eldest Foy child, Bryan, is played by a teenaged Billy Gray, who had just started playing Bud Anderson in the hit 1950s TV series “Father Knows Best.” We also see him as a young boy, too. And who plays him as a young boy? Jerry Mathers, who, two years later, would play Beaver Cleaver in the hit 1950s TV series “Leave It to Beaver.” I like stuff like that. 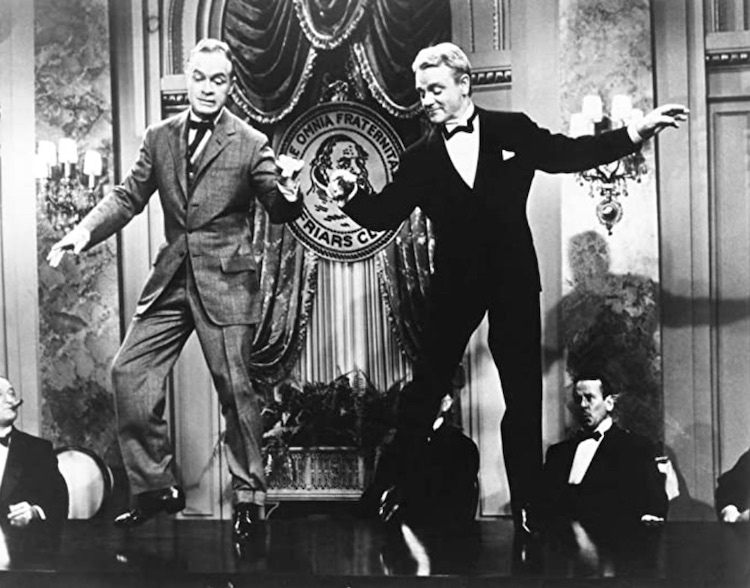 Cagney in fighting form; Hope with the college try.