The working title was better: “Operation Starlift.” It was actually a thing, too. According to The San Francisco Examiner, Nov. 22, 1950, it began with gossip columnist Louella Parsons, who organized the transport of Hollywood stars on an Air Force C-47 to Travis Air Force Base north of San Francisco to entertain troops who were wounded in the Korean War or were heading there. It was basically a roving version of Hollywood Canteen.

Hollywood Canteen, for those who don’t know, was a club in LA offering food and entertainment to troops heading overseas during World War II. It was started by Bette Davis and John Garfield in October 1942, and literally hundreds of stars volunteered their services—from Bud Abbott to Vera Zorina. A 1943 New York Times article mentions the canteen as a place where soldiers might dance with Betty Grable, get a cup of coffee from Hedy Lamarr, or chat up Rita Hayworth. The MC might be Bing Crosby or Eddie Cantor, with a band led by Kay Kyser. It lasted throughout the war and closed up shop on Nov. 22, 1945. 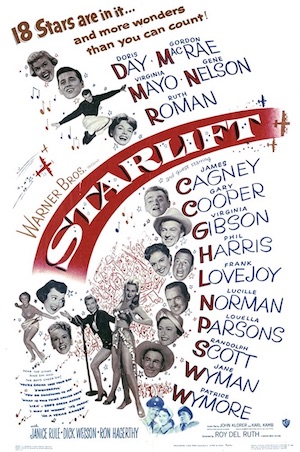 And even before the Hollywood Canteen, there was Stage Door Canteen, the New York/Broadway version, which opened in March 1942, led by Nedda Harrigan. A CBS radio series broadcast from the place from 1942 to 1945.

Each of these good-will gestures became movies of their own. Hugely popular movies, it turns out. Per The Hollywood Reporter Book of Box-Office Hits, “Stage Door Canteen,” released by United Artists, was the fifth-biggest movie of 1943, while “Hollywood Canteen,” released by Warner Bros., was the fifth-biggest hit of 1944. Merely mingling with the stars of Hollywood, the purveyors of wish-fulfillment fantasy, had become one of our biggest wish-fulfillment fantasies.

“Starlift” didn't do as well. According to Wiki, via Variety, it grossed $1.9 million in 1951. That’s probably top 20. It was the Korean War, so no longer all hands on deck. The movie is awful, too.

The worst Cagney impression
Sgt. Mike Nolan (the pushy one, played by Dick Wesson) and Cpl. Rick Williams (the passive one, played by Ron Hagerthy) are soldiers hanging out a movie theater next to cardboard cutouts of the stars when Nolan figures out a way to get close to the real ones. Williams is from Youngstown, Ohio, same as Nell Wayne (Janice Rule, one of the few stars playing a character here), so, against Williams’ aw-shucks objections, he claims Williams and Wayne were good friends back in Youngstown (they didn’t know each other), and that the boy is about to head overseas (they just transport others from SF to Hawaii and back again). And it works! Soon the two are back in the hotel room of Doris Day and Ruth Roman shooting the shit. Well, Nolan is shooting. Williams looks like he ate some bad sushi.

Nolan says he saw Doris Day’s first picture 47 times. She’s flattered. Then we find out he was a movie projectionist. Then he does an unfunny re-enactment of a French love scene with Ruth Roman, which is less Jean Gabin than Pepe Le Pew. It’s the whole kissing-up-the-arm gag. (When did that trope begin? When did it end?) Finally, he talks about how one time the projector broke down in the middle of “White Heat,” so he went out on the stage and did the movie from memory. As he does here, imitating James Cagney:

Pardo, I’ve been watching you. So far, you ain’t done anything I can put my finger on. But maybe that’s what bothers me. I don’t know you; and what I don’t know, I don’t trust.

In the middle of this, the real James Cagney walks in carrying a load of … whatever. Gifts? Noshes? Once he hears the guy doing him, he finishes the dialogue for him. Then we get this exchange:

Cagney: Now look here, pal. I don’t like people going on imitating me, you understand? I don’t like it!
Nolan: I… [still imitating] I’m not imitating you. Since when is there against people talking like this?
Cagney: Well, you know, there ought to be? And between us, one of us is very bad.
Nolan: Oh, I don’t know. I think you do it better even than I do.
Cagney: I’ve had more practice.

Cagney is actually being kind: Wesson does a horrible Cagney impression—and both he and the movie seem oblivious to it. How do you miss doing Cagney? How do they not find someone who can do a better Cagney?

Before Cagney leaves, Nolan corrals him again, says he’s noticed that before he hits a guy he hitches up his pants. He shows him. “Why do you do that?” he asks. Cagney opens his jacket: “That’s simple: No belt. So long, son.”

Cagney is the reason I watched this thing, of course, and I knew it was just a cameo (90 seconds of screentime, it turns out), but at least it came early in the movie—not even 15 minutes in. So I didn’t have to watch the rest. But I did. Because you never know.

But we do. The rest of the movie is awful.

The girls take the two soldiers back to Travis Air Force base, visit the wounded, signs some casts, and put on an impromptu show. It’s mostly Doris. She’s got pipes but with a supercheery, asexual delivery that speaks of the sad age. She’s also doing it in front of a fake backdrop—or frontdrop—of soldiers, which means even here they’re not performing for the troops. Meanwhile, Nell goes from being annoyed by the boy from Youngstown to kissing him goodbye. And on the way out, a bland colonel (Richard Webb) blandly and (to me) impertinently suggests the girls get a bunch of their friends to come up for a show.

They do. They're game. And we get a lot of song and dance numbers, and an overlong comedy bit from the team of Noonan and Marshall, which is mostly Noonan. (Marshall was Peter Marshall, straight man, and future “Hollywood Squares” host.) Meanwhile Phil Harris, the voice of Baloo from “The Jungle Book,” and thus beloved by me, tries to teach the boys about gin rummy but gets fleeced instead. Or does he pretend to get fleeced? I’ve already forgotten.

The music numbers are either super straightlaced (Gordon MacRae singing “The Good Green Acres of Home” backed by a military band), leggy but oddly asexual (Patrice Wymore singing and dancing “Liza (All the Clouds’ll Roll Away)”), or leggy, oddly asexual and culturally inappropriate (“Noche Caribe,” danced by Virginia Mayo, who’s dubbed by Bonnie Lou Williams). This last is introduced by Randolph Scott, who asks the men if they saw what they imagined in the tropics, such as “lovely maidens beneath swaying tropical palms.” The men shout NO!, Scott chuckles, and then introduces Mayo, who will “give you her idea of your idea of what you expected to see.” Unpack that. The reality didn’t live up to the sexualized myth, so here’s a white, somewhat asexual version of that. To keep the myth alive. But tamped down. I guess.

Watching all this, you understand why rock ‘n’ roll was invented. To cut through the bullshit.

The final number is a story-song, “Look Out Stranger, I’m a Texas Ranger,” starring an aged Gary Cooper, and playing off the western tropes Hollywood popularized.

Oh, and after being on and off, and on and off, the two Youngstownians make up and share a milkshake as in a Norman Rockwell painting. Then he gets on a plane—I think to war this time—while we hear strains of the Army Air Corps Song: “Off We Go Into the Wild Blue Yonder.” Finally this nod:

“Warner Bros. wishes to express their appreciation and grateful thanks to the Department of Defense, the United States Air Force and the officers and airmen of Travis Air Force Base for their whole-hearted cooperation which made this picture possible.”

Remember when Warners was gritty and left-wing? Jack Warner doesn't.

Huey Long --> MPA
The story and screenplay credit for “Starlift” go to John D. Klorer, who only has 14 such credits to his name, none of them memorable, but he certainly led a memorable life. In the 1920s, he was assistant city editor of the Times-Picayune in his native New Orleans during Huey Long’s rise to power. Then he became editor of the Louisiana Progress, a Huey Long ragsheet, and became part of that rise. He was Long’s secretary in D.C. when the Senator and presidential candidate was assassinated in 1936. After that, Klorer moved on to Hollywood, where he joined the right-wing Motion Picture Alliance, which helped bring the blacklist to Hollywood, ruining countless lives—including Hollywood Canteen co-founder John Garfield's. In July 1951, five months before “Starlift” was released, Klorer was returning home from a golf match at Lakeside Golf Club when he had a heart attack and died. He was 45.

The director was Roy Del Ruth, who directed some of the fun, slapdash, early Cagney pictures, such as “Blonde Crazy,” “Taxi!” and “Lady Killer.” The kind where you don’t know where the story is going; where it just veers suddenly and now it’s about this. I don’t know much about Del Ruth. His directing style has been called “easygoing,” while in the book Backstory: Interviews with Screenwriters of the 1940s and 1950s, screenwriter Dorothy Kingsley credits him as a director who taught her she didn’t have to overwrite for the screen. He’s hardly mentioned in John McCabe’s Cagney bio, other than an incident in which, to Cagney’s quiet consternation, he doesn’t correct Margaret Lindsay’s Britishisms. (It was the other “Roy” director, Mervyn LeRoy, whom Cagney loathed.)

Overall, “Starlift” is indicative of the period. It’s anodyne, asexual, bland. Even Wesson as Nolan is bland. His machinations unintentionally create all this and yet there’s never a mea culpa or epiphany or anything from him. There’s never really anything from him. Whatever type he is has had its most interesting elements leeched away.

By this point in movie history, it seems, all the tropes have been codified and everyone’s bought in. The women are pretty but there is no sex. The men wolf-whistle but make no passes. There’s a war on but there are no battles. Everyone’s ramrod straight and so, so dull. There's not a true moment in here. Well, one. Gene Nelson was a helluva dancer—did the “Everything's Up to Date in Kansas City” number in “Oklahoma”—who wound up directing television, including, believe it or not, the Wrongway Feldman episode of “Gilligan's Island” and the “Gamesters of Triskelion” episode of “Star Trek,” both staples of my childhood. Amazing arc. Anyway, we first see him here, playing himself, and dancing in a number being filmed in Hollywood with Nell/Janice Rule. After it's over, he walks over to the choreographer, LeRoy Prinz (yep, another “Roy”), who went by the nickname “Pappy,” and who staged dances in everything from “Yankee Doodle Dandy” to “South Pacific”; and after this great, athletic dance number, as everyone is drifting away, Nelson asks him, “Got a cigarette, Pappy?” I liked that.

Also Cagney saying he didn’t like people imitating him. He didn't.