“Tattaglia is a pimp. He never could have outfought Santino. But I didn't know until this day that it was Barzini all along.” – Don Vito Corleone.

James Cagney is a little smarter than Don Corleone. He figured out fast that it was Barzini—or actor Richard Conte, who plays Barzini in “The Godfather” and Bill O’Connell here: a Nazi spy amid the U.S. Secret Intelligence service during World War II. One wonders if this wasn’t inspiration for Francis Ford Coppola’s casting or if Conte was commonly cast as the turncoat in ’40s and ’50s movie. Or if it was just a coincidence.

It’s supposed to be O.S.S., and Cagney’s character, Bob Sharkey, is supposed to be “Wild” Bill Donovan, but apparently neither Donovan nor the O.S.S. liked the storyline. I don’t blame them. The U.S. Secret Intelligence service doesn’t come off very intelligent. That’s why the filmmakers chose the lookalike “O77,” which stands for Operation 77, since this is the 77th operation the service has engaged in since the war began. I know that’s the letter “o” not the number zero, but I couldn’t help notice the James Bond connotation: oh double-seven instead of double-oh seven. The first Bond novel was published five years later, so one wonders if this wasn’t some kind of inspiration for Ian Fleming. Or if it was just a coincidence.

Where have you gone, Lefty Merrill?
“13 Rue Madeleine” is the second Henry Hathaway-directed movie in as many years with a street address for a title (“The House on 92 Street”), a plot revolving around a Nazi double agent, and what the AFI site calls a “documentary-like” feel (the stentorian voice of wartime narrator Reed Hadley is used for exposition). The movie begins on the rainy streets of Washington D.C., and then we get a shot of the National Archives. Beneath a statue of “the future” is a phrase from Shakespeare’s “The Tempest.” And our stentorian narration begins:

“What is past is prologue. Yes, here in the National Archives in Washington D.C., past is prologue. For this is the final resting place of the histories and records of tens of thousands of illustrious Americans. World War II has come to a victorious conclusion, and now new names and new records are being added to the list. For the nation and the world are for the first time learning of silent and significant deeds performed in foreign lands by a legion of anonymous men and women—the Army of Secret Intelligence.”

He keeps going. How long? We’re six and a half minutes in before we get the first snippet of dialogue. Then imore narration. I guess it's one way to go. Probably beats dialogue like: “Hi, I’m Bob--” “No need to introduce yourself, Mr. Sharkey, your reputation proceeds you. Master of five languages. Expert in judo. You grew up in St. Paul, Minnesota, right?” “Yeah, that’s right. [smiles] Should’ve known Secret Intelligence would have some intelligence on me.”

As Cagney’s previous film, “Blood on the Sun,” was sloppy seconds to “Casablanca” (pre-war romance with exotic beauty in exotic land), so this is sloppy seconds to Alan Ladd’s “O.S.S.,” which was released almost a year earlier (May 1946 to January 1947) and obviously received Donovan’s imprimatur. And just as “Blood” contained its echo of Bogart’s “hill of beans” speech, so this contains an echo of “O.S.S.”’s speech about how the spy biz is antithetical to the American character.

“Americans aren’t brought up to fight the way the enemy fights. We can learn to become intelligence agents and saboteurs if we have to. But we’re too sentimental, too trusting, too easy-going...”

“Now the average American is a good sport—plays by the rules. But this war is no game, and no secret agent is a hero or a good sport. That is—no living agent. You’re going to be taught to kill, to cheat, to rob, to lie. And everything you learn is moving you toward one objective—just one, that’s all: the success of your mission. Fair play? That’s out. Years of decency and honest living? Forget all about them or turn in your suits.”

It’s funny hearing Cagney talk about how Americans play by the rules when his spent his entire career cast as gangsters like Tom Powers and grifters like Lefty Merrill. There’s some truth to his speech, I suppose, but there’s more truth in Lefty’s line: “I'm telling you, Mac, the public is like a cow, bellowing, bellowing to be milked.” Or maybe the above speeches were how a postwar America was bellowing? After all that, it wanted to be told it was still innocent.

At the training grounds in England, Sharkey's superior, Charles Gibson (Walter Abel), tells him that one of the recruits is a spy and it’s up to Sharkey to figure it out. The narrator has already helpfully introduced us to three possibilities:

Since O’Connell graduates at the top of his class—passing tests that were designed for failure—Sharkey knows it’s him.

Then the first mistake. Rather than arrest him, the service decides to feed him false intel. The big question at this point in the war is where the U.S. is going to open a second front, so they send O’Connell, Lassister and de Beaumont on a mission to Holland, where, they imply, the second front will be opened. Then they make a bigger mistake: They let Lassiter in on it. They tell him his pal, with whom he trained, joked and played backgammon, is a Nazi spy, and the kid can’t deal. On the flight over, O’Connell makes small talk but Lassiter can barely look at him. Immediately O’Connell figures his cover his blown and Holland is a lie, and he takes swift action. Before the jump, he cuts Lassiter’s parachute cord and Lassiter plunges to his death, while “O’Connell” (real name: Kuncel) slips back to Gestapo headquarters in Le Havre: the 13 Rue Madeleine of the title.

Up to this point, our main characters have been Lassiter, O’Connell and the narration, and we’ve basically just lost all of them. So who fills the gap? Cagney, of course. Sharkey decides he’s the one who should continue the mission—capturing a man named Duclois (Marcel Rousseau), who built a factory in Le Havre at which the Germans are manufacturing V-2 rockets. Some of the intrigue isn’t bad. He parachutes in, is met silently by a French farm family who bury his parachute and whose little girl points him to the safe house. It’s run by a severe, older French woman (Blanche Yurka), who’s great. She talks to Sharkey sternly, tells him he needs to move on at first light, betrays nothing of her allegiances. Lassiter should’ve had such a game face.

Sharkey goes by the undercover name Chavat and runs into a lot of luck. He asks the town’s mayor (Sam Jaffe) about Duclois, and the mayor turns out to be Free French. They work together to pull German guards from Duclois so they can snatch him; but Sharkey is captured by O’Connell/Kuncel and brought to the titular house, where, we’re told, he’ll suffer “the cruelest tortures the Germans can devise.” Cut to Germans sipping coffee while we hear whipping noises from the other room. Painful, sure, but hardly devised by the Germans.

The ending is interesting for two reasons. One, it prefigures Cagney's famous end in “White Heat.“ Cagney's in the torture room, sweating, bloodied, eyeing Kuncel, when the Allied planes go overhead. He knows the Allies will blow up the V-2 factory and 13 Rue Madeleine, thus ending his pain and Kuncel’s chance to find out about the second front. Which is what happens, and he laughs. And that's how he dies: Laughing in a fiery explosion, laughing. Top of the world.

All at once
But this isn’t the end-end. We actually return to Washington, D.C., the National Archives buidling, and the quote: “What is past is prologue.” The camera lingers on it to remind us of ... what? If this is the past, then the prologue is … the Soviets? I got a real Cold War vibe from that. Concurrently, but oddly, IMDb lists Julie and Ethel Rosenberg among the cast:

It's odd because the Rosenbergs weren't arrested for espionage until the summer of 1950. So was the footagae from an earlier arrest? Was Roseneberg footage adde to the film upon a re-release in the 1950s? Or is IMDb mistaken?

“Rue” is the only movie Cagney made between 1943 and 1948 (his second Warner-less period) that was a true studio film (20th Century Fox). It’s also the movie where he really begins to show his age. Just three years earlier, in “Johnny Come Lately,” he looked youthful. Here, he’s put on weight, his face is blockier, his lips have turned inward. Was it the war? The time off? The farm work? I guess this is how it happens: Bit by bit, then all at once.

But he’s still Cagney. I like this exchange before Sharkey parachutes into occupied France.

Gibson: You won’t come back.
Sharkey: I’ve just discovered something about you.
Gibson: What?
Sharkey: You’re a worrier.

It’s a nice bit—particularly Cagney’s eyes darting over Gibson’s face. It’s the eyes of an actor listening as well as talking. 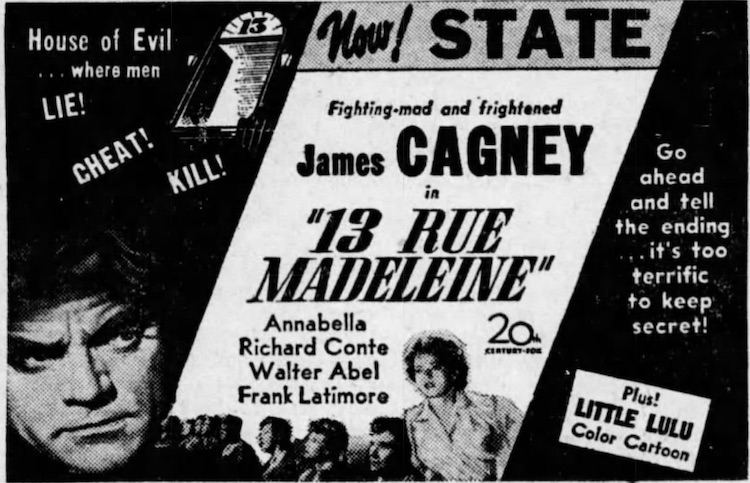