“You may think this is heresy, Jim, but I’ve always thought of you as essentially a comedian.”

The line comes from Margaret Hamilton—yes, the Wicked Witch of the West—during the filming of “Johnny Come Lately” with James Cagney in 1943. Cagney’s response? “I told Margaret that it was not only not heresy, it was gospel. My gospel.” He thought all of his roles contained comedic elements. “I have too much of Frank Fay and Lowell Sherman in me,” he told biographer John McCabe, “not to have a comedic attitude at the base of my acting.” 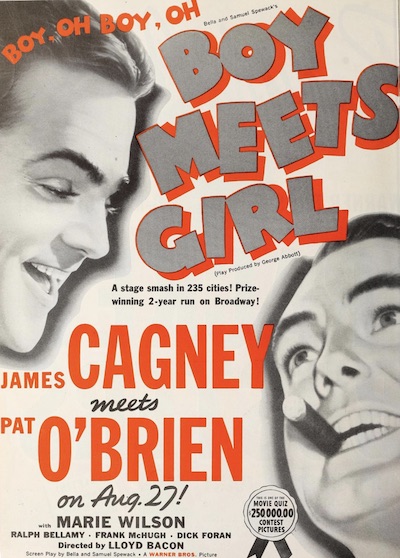 Sure. And you can see elements of that attitude in “Blonde Crazy,” “Hard to Handle,” and “Lady Killer,” among others. But here? In this comedy/farce? Nope. Everything’s big and theatrical. Nothing lands.

Not just for him, either. Apparently during the making of “Boy Meets Girl”—a send-up of the movie industry based on the 1935 hit Broadway play by the husband-wife team of Bella and Sam Spewack—producer Hal Wallis kept demanding a quicker pace and ordered director Lloyd Bacon to reshoot some scenes. From McCabe:

Both Cagney and [Pat] O’Brien knew that the unremittingly swift pace Wallis had imposed on their director was too much, and that, in farce, as in everything else, one had to grant moments of rest. Jim was in special need of caution because of his natural tendency to talk fast. He never watched dailies as a rule but did one day in Ralph Bellamy’s company. As they came out of the projection room, Jim turned to his friend and said, “Would you tell me what I just said? I couldn’t understand a word.”

Too true. But there’s a bigger problem with “Boy Meets Girl.” Its leads are privileged assholes.

Braves and sagamores
Benson and Law (O’Brien and Cagney) are the most successful screenwriting team on the Royal Studios lot, and their huge, cluttered office includes giant Barrel-o-Monkeys hanging from the ceiling, a phonograph of a typewriter tapping away (to throw others off the scent while they play), and movie posters based on their scripts hanging on the walls. Spot the theme:

That theme is the reason they’re wealthy ($1500 a week each during the Depression) and it’s the bane of their existence. They’re smart men who write pablum: boy meets girl, boy loses girl, boy gets girl. “It’s the great American fairy tale,” Law says. And it’s killing them inside.

So how do they deal with it? Pranks, antics, madcap behavior. They join a dance line on another set, run circles around producer C. Elliott Friday (Ralph Bellamy), instigate a revolt on Indian extras, and mock cowboy movie star Larry Toms (B-western star Dick Foran). They have an anarchic spirit like the Marx Brothers but aren’t nearly as anarchic and definitely not as funny. The white collars don’t help. I actually got whiffs of the 1970s Harvard Lampoon boys: white men with the power to change things who are content to mock the system while swinging a golf club. I never much liked those guys.

The Indian revolt is particularly problematic. Friday is forever receiving calls about what he never ordered for his movies—or what he ordered and forgot—and for a time it’s a busload of Native Americans. Outside Friday’s office, Law riles them up:

Law [theatrically]: Men, I say to you: protest. Mr. Friday asked you to come to work. And now he won’t give you any work. Think of your forefathers. What did they ever get from the paleface—a handful of beads. They took your rivers, your mountains, your plains; and they taught you instead of putting corn in the ground, you could put it in a jug. And today, what do they give you for your great Indian trails? Signboards and trailer camps.

Law [more theatrically]: Arise, braves and sagamores! Beat your drums of war in protest! Wait! [Picks up rock] I’m going to make your protest heard ’round the world! Forward, men! To victory!

Then he tosses the rock through Friday’s window, and the Indians are never heard from again. The whole thing is a joke to Benson and Law but it’s never funny—to the Indian extras least of all, one imagines.

(It is, nonetheless, an improvement. Four years earlier, in “Lady Killer,” another send-up of the Hollywood system, it’s Cagney and other white extras who are spraypainted and fitted with headdresses in assembly-line fashion. At least here Native Americans get to play themselves.*)

As the movie opens, Benson and Law are stuck writing a comeback movie for Larry Toms, who hovers nearby with his agent, Rosetti (Frank McHugh), demanding action. It’s not until a half-hour in, when a waitress, Susie (Marie Wilson), brings a mostly ignored platter of food for Friday, then faints because she’s pregnant, that they glom onto something. A baby! Her baby! Who’ll be named Happy. They’ll put Happy in Larry’s movies and make him a star!

And they do just that. The montage of Happy being put through the star-making machine (movie magazines, etc.) may be my favorite part of this thing.

On the other side of the montage, all seems well. Susie is going back to high school to get her diploma, and Benson and Law, who have power of attorney over Happy, are in the catbird seat. Until they’re not. It’s a little odd how it happens. For the first half of the movie, they ignore work in favor of escapades; in the second half of the movie, they ignore Susie (whom they like) in favor of work. They’re too busy writing screenplays for Happy, her son, to talk to her. As a result, when they let the POA lapse, Rosetti swoops in, sweet-talks Susie, and takes over.

Their scheme to get back what they lost involves the boy-meets-girl subplot. Before giving birth, Susie hit it off with a British extra, Rodney Bowman (Bruce Lester), who was in Friday’s office to get approval for the Buckingham Palace guard uniform he was wearing for a film called “Young England.” Friday, who puts on airs, dismissing Kipling in favor of Proust, for example, objects to the hat but is fine with everything else. Rodney politely informs him that the hat is the only authentic part of the uniform. For that, he’s fired. But B&L’s scheme is a little desperate. At the premiere of a new Errol Flynn picture (“The White Rajah”), as Susie is being interviewed for radio by a young Ronald Reagan (only his sixth credited picture), Law pushes Rodney towards her so he can claim to be the father of Happy. A scandal ensues.

Back at the studio, B&L lock up Rodney, he escapes, tells Friday that B&L orchestrated the whole thing, and they’re canned. As is Happy: washed up at eight months old. Benson and Law have long disparaged what they do, with Law in particular talking about leaving Hollywood to write the Great American Novel in Vermont, but maybe inside they both know this is what they’re best at. So they scheme to get back the soul-killing but high-paying job: They get a British friend to send a telegram to Friday offering to buy the studio as long as Happy is still under contract.

This scheme, too, is eventually uncovered, but by then B&L have their old jobs back. It’s also uncovered that Rodney is really the son of a British lord, he asks Susie to marry him, and the two decide to raise Happy in Europe, away from the Hollywood hubbub. The end.

Me: Right, except it’s 1938. Europe isn’t such a happy place—or a place for Happy. And it’s about to get much, much worse.

In like Flynn
It’s a little ironic that the best part of a movie that mocks “boy meets girl” storylines is the boy and the girl. Lester as Rodney is quiet, understated and intelligent. He knows he’s in a clown shop but seems too polite to mention it. I’d never seen Marie Wilson before but she’s got a Judy Holliday thing about her. In his memoir, Cagney calls her savvy and “very adept at giving an impression of naivete.” Reagan is also good in a small role. He’s young, thin, oh-so handsome, and flummoxed when his radio interview goes complete awry.

Cagney? I think I’ve said it before, but it’s so odd that his gangsters are often more likeable than his civilians. That’s the case here, too. He does have his moments, though. During one of the many farcical meetings in Friday’s office, he does a little dance number by himself that’s admired by Pat O’Brien. Earlier, goofing about love love love, he lays on a chaise while doing a dancer’s stretch that’s pretty incredible. He gets his leg way back there. At nearly 40.

I like some of the insidery stuff. Apparently Benson and Law are based on  Ben Hecht and Charles MacArthur, while Friday is Darryl Zanuck, but I haven’t seen corroboration on this. Dick Powell gets lauded and the Barrymore larynx is mentioned. It’s a Warners movie—Cagney’s first back with the studio after two pictures with Grand National—so of course the studio pimps some of its product, particularly Errol Flynn, who is mentioned three times as the star the ladies are all now crazy about. According to TCM, they also took him down a notch. The Flynn movie being premiered, “The White Rajah,” is fictional, but apparently that was the title of a script Flynn wrote and pushed on Warners that was summarily rejected. I do love the title. So of the era. They should make it today. As a farce.