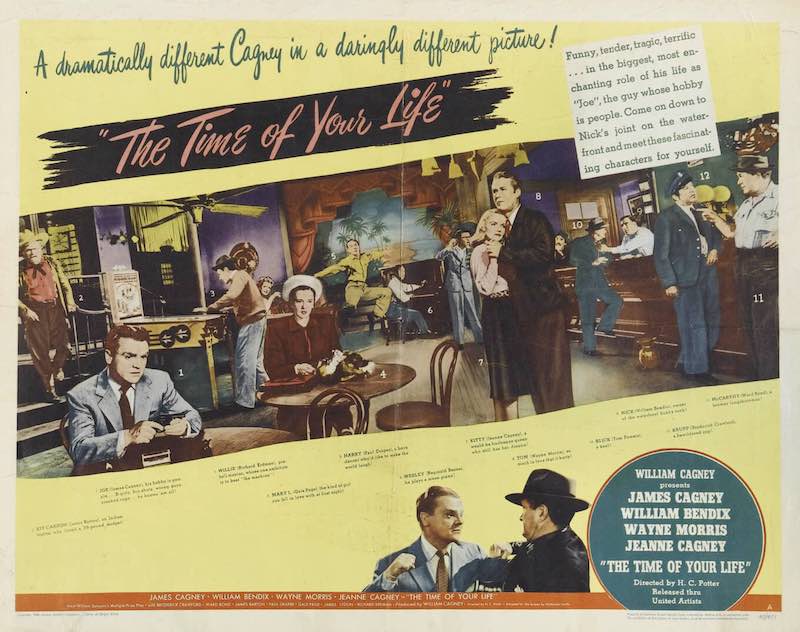 If you like “White Heat,” thank “The Time of Your Life.” James Cagney wouldn’t have returned to the movie studio he despised (Warners), and the genre he didn’t care for (gangster), if the Cagney brothers’ adaptation of William Saroyan’s 1940 Pulitzer Prize-winning play hadn’t been so costly to produce and bombed so badly at the box office. The bombing was perhaps inevitable, the costliness not. It was basically a filmed played, so why cost overruns?

According to Cagney, director H.C. Potter and cinematographer James Wong Howe insisted on two weeks of rehearsals to block everything out, then they realized they had a problem with the mirror above the bar (or something), so it all amounted to wasted time. And money. Then the ending had to be reshot. Howe is a legendary cinematographer, who had previously photographed five Cagney flicks, including “Yankee Doodle Dandy,” but the two never worked together again. Not sure why the Cagneys went with Potter in the first place. I guess because he was a stage as well as a film director. Except his film output tends to be the lesser-known efforts of great stars: James Stewart in “You Gotta Stay Happy,” Fred Astaire in “Second Chorus,” Cary Grant in “Mr. Lucky.” In his favor, he did do “Mr. Blandings” and directed Loretta Young to an Oscar in “The Farmer’s Daughter” in 1947. But that’s a small favor.

As for why bombing was inevitable? Imagine Billy Joel’s “Piano Man” as a precious, one-set film. John at the bar is always yakking about how he could’ve been a movie star; Paul, the realtor, is forever working on his novel; and look, there’s ol’ Davey in his Navy whites. Everyone is this thing and nothing else.

'Sup, Officer Krupp
Cagney is the kind of conductor of it all. He plays Joe, “whose hobby is people,” and who hangs out all day at Nick’s Pacific Street Saloon Restaurant: & Entertainment Palace. He observes people, we’re told, but we also see him fix things with an amused, know-it-all demeanor. The way Cagney’s Tom Richards acts as Lone Ranger in “Johnny Come Lately”—showing up in town, fixing things, riding the rails out—so Joe does all that but from his seat near the bar.

William Bendix plays Nick “whose hobby is horses,” while Cagney’s sis Jeanne is Kitty Duval, “a young woman with memories.” Everyone has their bit. Everyone is defined by it. Dudley (Jimmy Lydon) is lovelorn, Willie (Richard Erdman) is forever playing pinball, while Harry (Paul Draper) thinks of himself as a tap-dancing comedian, except nothing he does is funny. It’s mostly annoying. The bar is supposed to be full of characters but it’s actually full of annoying, one-note people who tend to be solipsistic. It’s a big space but everyone can’t believe that guy got in the way of me doing my thing.

Joe has a right-hand man named Tom (Wayne Morris) whom he bosses around: get toys at such-and-such a place; play numbers 6 and 7 on the jukebox. Later, Tom eyes Kitty, who shows up, asks for a beer, and is disrespected by Nick. He calls her “a B girl at Manigi’s joint up the street” but she insists she was once in burlesque and had flowers sent to her by European royalty. I guess she’s supposed to be trashy and lost, like Claire Trevor in “Key Largo,” but she’s just Jeanne Cagney—cute and sturdy—and Joe works it so she and Tom wind up together. That’s one thing he does.

He also tells Nick to bet on Precious Time in a horse race, and, despite long odds, it wins. “How do you do it?” Nick asks. “Faith,” Joe responds. There's a vaguely magic realist element to him. Later, for example, he tells Nick to bet on a horse named McCarthy, who's supposedly no good, but Joe insists it'll come through. How does he know? “McCarthy's name is McCarthy, isn't it? The horse is going to win, that's all. Today.” And it does. Joe knows all.

I like a scene halfway through, where he talks up a new patron, Mary L., “a woman of quality” (Gale Page), and they play a little guessing game about each other’s names:

She: Joseph?
He: That’s my first name. Everybody calls me Joe. The last name’s the tough one. I’ll help you a little. I’m Irish. [pause] Just plain Mary?
She: Yes, it is. I’m Irish, too. At least on my father’s side. English on my mother’s side.
He: I’m Irish on both sides. Mary is one of my favorite names. I guess that’s why I didn’t think of it.

The whole Mary/favorite name thing is a nice echo of “Yankee Doodle Dandy.” We get an ironic version of this when Joe insists (to Kitty) that he can’t dance.

Beefy character actors Broderick Crawford and Ward Bond play, respectively, a cop and a blatherskite, which means “a person who talks at great length without making much sense,” except Bond’s character doesn’t seem to do that much, and anyway the most fascinating thing about each is their name. A year before his Oscar turn in “All the King’s Men,” Crawford’s cop is called Krupp, which makes me think of Officer Krupke from “West Side Story,” as well as a corruption of “corrupt” (even though Krupp isn’t); while Bond, who is about to become the right-hand man to HUAC in fomenting the blacklist in Hollywood, plays McCarthy two years before “McCarthyism” was born. That one made me do a doubletake. Plus, yeah, the horse. McCarthys everywhere in the late '40s.

More fun with names: The bad guy, Freddy Blick, is played by character actor Tom Powers, which just happened to be Cagney’s character’s in his breakthrough role in “The Public Enemy” back in 1931. (Powers also played the cuckolded husband in “Double Indemnity.”) Blick is described as “a stool pigeon and frame-up artist” so it’s odd that everyone at the bar seems afraid of him. Why would you be afraid of a stool pigeon? Answer? In the play, he was a vice cop, so he had power. Basically they change him from dirty cop to dirty rat but pretend the dynamics are the same. They aren't.

Blick is also the reason for the other, costlier change. In the play, he bullies the bar’s patrons, particularly its women, until a new patron named Murphy (James Barton), a twinkly-eyed teller of tall tales who goes by “Kit Carson,” shoots him off-stage. Then he comes back onstage and talks about it as if it were a thing of the past, a thing he couldn’t quite remember, another tall tale. After that, Joe gets out of his seat, waves goodbye to everyone, and that’s that. The Cagneys filmed this version and took it through previews in Pasadena and Santa Barbara. “You could have heard a pin drop in the theater,” Jeanne Cagney has said. “I just don’t think audiences were ready for a philosophical play.”

So they refilmed the ending. Cagney’s Joe has to put up his dukes and the patrons merely oust Blick—they don’t kill him. In the aftermath, we get some quirky lines from Joe and Kit Carson, while Nick, listening to the blather, takes a sign reading “Come in and be yourself” from his window, says “Enough is enough,” and tears it in half. I’m not sure how the original end would’ve played—it would require a delicate touch to have impact—but this one amounts to a kind of hapless shrug. A Wuhr-wur. I would've rolled the dice on the other.

What the hell else
Anyway, it’s not good, and I guess the copyright has expired, as with many (all?) of the independent Cagney productions, so the version I saw was a cheapie on YouTube. It looked like a kinescope of an early TV play rather than a feature film. That didn’t help but that’s not the problem. Everything else is.

I go back to Hitchcock’s line about the true drama, the better drama, happening off camera among the actors (leading Truffaut to make “Day for Night”), and it’s true here but in terms of irony and poignancy. The film strives for poignancy and doesn’t get there. But for Cagney, the whole enterprise feels excruciatingly poignant. He became a star at Warners as a tough guy, bellyached for a decade about the money he made and the roles he got, finally left to make more hifalutin fare, and he couldn’t even get the stuff through previews. He had to add fisticuffs to Saroyan. “But what the hell else could we have done?” he told his biographer John McCabe in 1980. “The public just didn’t get it at the previews.”

What could he have done? Held the line. Rolled the dice. Instead he corrupted the final product and audiences still didn’t come. So he returned to Warners. His reward for desertion was a lot more money and the role of a lifetime in “White Heat,” but I think he only truly appreciated the former. I don’t think he ever appreciated how great he was in those gangster roles. Maybe none of us appreciate what we do well. We keep striving for the other thing.