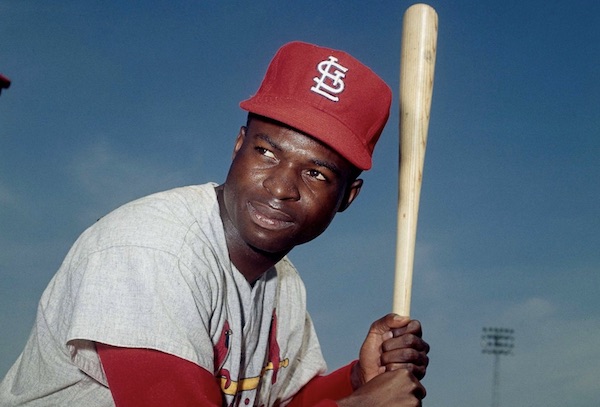 Twenty-plus years ago, when I wrote a Star Trek novel for my friend Tim, I named the ship after his favorite baseball player: the U.S.S. Brock. I called it “the fastest ship in the galaxy,” but according to Joe Posnanski, in his tribute, Brock wasn’t really the fastest base stealer—just the smartest. He set the single-season stolen base record not when he was young but when he was 35. It was all about reading pitchers and going.

I just missed his World Series heyday. In the 1964 World Series against the Yankees, he hit .300 with two doubles and a homer, but that was piker stuff. Three years later, against the BoSox, he hit .414, slugged .655 and stole seven bases—a World Series record. 1968 looked to be even better. After five games, he was hitting .524 (11 for 21) and slugging 1.048, with two homers and—again—seven stolen bases. I caught up with these exploits when I read Roger Angell’s “The Summer Game.” His account of the ’68 Series is punctuated throughout with Brock stealing second before he writes this:

Sunday's game, played in a light-to-heavy Grand Banks rainstorm and won by the Cardinals, 10-1, offered several lessons, all of them unappreciated by the Tigertowners. (1) Lou Brock does not always steal second. He led off the game with a homer, tripled and scored in the fourth, grounded out in the sixth, and then doubled and stole third in the eighth. It was his seventh stolen base of the Series, tying the record he set last year against Boston.

But it was in the fifth game when things turned. The Cards were up three games to one, and leading this one 3-0 when Brock got caught stealing—the first time that had happened in any World Series. That’s right: He’d been 14 for 14. Cards were still up 3-2 when he hit a one-out double in the 5th and might have scored on a Julian Javier single but didn’t slide. He came up again in the 9th, two on, two out, down by two, and grounded out to end the game. The next game, a Tigers blowout, he went 1-4 with an error. Game 7 he went 1-3 but got picked off first. You can’t be golden all the time. Even so, if you’re doing an All-Star World Series team, he’s the guy you want.

He was signed by Buck O’Neill, chafed in a poorly run Cubs organization, and in one of the most lopsided deals in baseball history was traded to the St. Louis Cardinals, where he prospered. Ernie Broglio, who nearly won a Cy Young in 1960 (21-9, 2.74 ERA), is known today as the guy the Cubs got for Brock. In Chicago, Broglio lasted three seasons and went 7-9 with a 5.40 ERA. Brock lasted 16 years in St. Louis, hit .297, stole 888 bases—for a lifetime total of 938—and became a first-ballot Hall of Famer.

Do we say “Rest in peace” here or keep going? Read the pitcher and go.