This is worrisome. From David Remnick's piece, “Obama's Old Friends React to the Debate.”

When Barack Obama was a student at Harvard Law School, he was never known as a particularly good debater. In class, if he thought that a fellow student had said something foolish, he showed no forensic bloodlust. He did not go out of his way to defeat someone in argument; instead he tried, always with a certain decorous courtesy, to try to persuade, to reframe his interlocutor’s view, to signal his understanding while disagreeing.

Barack Obama’s instincts and talents have never included going for an opponent’s jugular. That’s just not who he is or ever has been.

The President has always been someone who takes the truth seriously and has a great faith in the American people and their ability to handle big ideas. He doesn’t patronize them. He uses the campaign as an educative process. He wants to win but also wants to be clear about his ideas.

Romney stood there, with his hair and his jaw and his terrific angles—and he lied! About taxes, about Medicare. Obama pushed back on the five-trillion-dollar tax cut or the way Romney’s version of Medicare would destroy Medicare as we know it. And Romney just tilted his head and said, Oh, no, it won’t. At some point, you have to believe that the facts speak for themselves.

The sadder fact about the electorate is that they don't want facts; they want wish fulfillment. You say you'll cut my taxes and the deficit won't grow? Yay! You say we can take down Saddam, who caused 9/11, with no cost to ourselves? Double yay! You say you'll give me a loan for this house I can't afford? Triple yay!

At some point, the bill arrives.

We respond to emotion: fear and reassurance. The GOP knows this. Everyone including me thought Obama's 2008 victory was about hope and change but it was really about fear and reassurance: our fear that an idiot president was destroying our economy. Huge institutions like Bear Stearns and Lehman Bros. were crumbling to the ground like the twin towers on 9/11. What do we do? Hey, this guy seems smart and calm. Let's vote for him instead of the crazy old man, with the dippy girl, neither of whom is reassuring me at all. He's what? He's black? Whatever. He seems smart and calm. Obama '08!

But for Obama to win this time, he needs to be more than calm and smart. He needs to call a liar a liar. For the good of the country. He can't be Ali holding back his punch as Foreman goes down, because, now, Romney isn't going down. He's going up. And if he goes up, we go down.

Obama needs to do it. In the next debates. Every day on the campaign trail. He can even frame it within the context of who he is. “I'm not the type of person who...” “People who know me know I try to be diplomatic whenever possible...” Then add the “but.” Then throw the fucking punch already.

Because Mitt Romney, rich bastard, dissembler and liar, hider of taxes and firer of people, needs to be decked with the truth.

And brother? Make it sting. 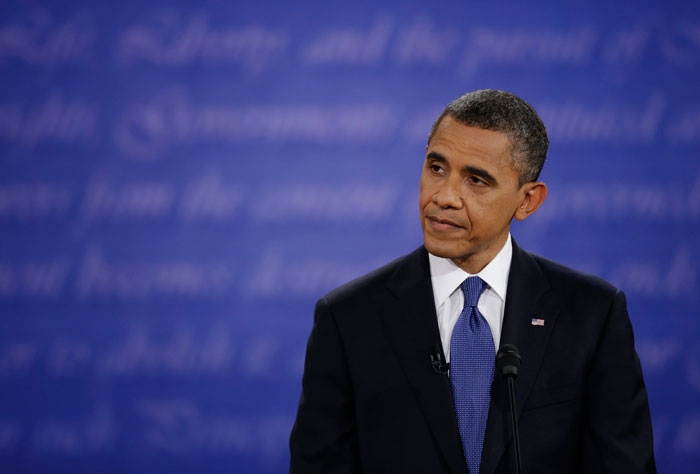