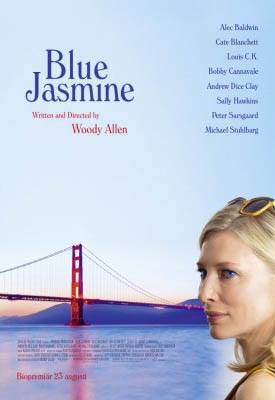 We should enjoy it, shouldn’t we, this tale of one of the 1%, a rich, useless woman, the wife of a Ponzi schemer, who, after her husband is caught and jailed and commits suicide, is forced, horribly, to live like us, and with us, in a small, tacky apartment above the New Central Cafe in San Francisco. She’s forced to do more than shop with friends, and lounge by the pool, and go to yoga and pilates classes. She’s forced to look for a job and a purpose. So we should enjoy her discomfort. We should say: Welcome to the party, pal.

Instead, it’s brutal. It’s painful. I kept shielding my eyes from the screen.

It’s brutal in two ways. First, Jasmine (Cate Blanchett) is still an awful person. She says the worst, most obtuse things to her sister. She doesn’t fit in, she doesn’t want to fit in, but she has no other choice. She can’t help but be herself but she can no longer afford to be herself. So where does she go? What does she do?

She retreats into the past. She stares into space. She goes slightly crazy. That’s the second way the film is brutal: documenting, in a stunning performance, in a raw, Oscar-worthy performance, a woman’s descent into mental illness.

So we keep bouncing back and forth between these thoughts, these emotions. We think: My god, what an awful person. Oh, but what a shame that that’s happening to her. But my god, is she awful!

Everything you always wanted to know about sexual harassment*

It begins with an airplane, high in the clouds, coming toward us, and a voice saying, “There was no one like Hal.” That’s Jasmine talking to her seatmate, an older woman, who in their short time together hardly gets in a word. Jasmine keeps babbling about herself, and her life, and her husband, Hal (Alec Baldwin), now deceased, as if there was something positive about it; as if Hal hadn’t ruined her life.

She’s moving, with her Louis Vuitton bags, from New York to San Francisco, and into her sister’s small, cramped apartment, but we keep getting flashbacks to her other life since she keeps flashing back to her other life. She wants to live there. Even though she’s awful there.

One flashback, for example, involves a week-long trip her sister, Ginger (Sally Hawkins), and Ginger’s then-husband Augie (Andrew Dice Clay), took to New York City a few years earlier. Jasmine’s reaction at the time? “I guess I have to see them,” she tells Hal. Ginger and Augie are both working class, and salt of the earth, but Jasmine can’t make the time or the space. The visitors stay at a Marriott rather than with Hal and Jasmine. Hal loans them his car and driver, so that’s something, I suppose. While that’s happening, Ginger, perhaps too coincidentally, sees Hal kiss a stunning woman on Park Avenue, and later, at a party, inadvertently plants the seed that ends it all. She doesn’t tell Jasmine outright; instead she asks: Who is that woman with Hal? I don’t like the way she’s hanging around him. But Jasmine refuses to open her eyes to what everyone else sees.

At least she’s got her high-toned looks, her high-toned clothes. Ginger, ever helpful, suggests maybe design? Interior decorator? She loves the idea! Except doesn’t she need a license? But couldn’t she get one online? But wouldn’t she need to use a computer for that? She doesn’t know how to use a computer. Meaning: she’s never used a computer. So she signs up for a class—this is the hardware, this is the software—while working as a receptionist in the office of a mutual friend, Dr. Flicker (Michael Stuhlbarg).

Jasmine, computer illiterate, has obviously missed out on a lot. Has Woody? We’re in San Francisco now, but between Ginger’s ex (Dice Clay), Ginger’s current boyfriend, Chili (Bobby Cannavale), and Chili’s friend, Eddie (Max Casella), we might as well be in New York or New Jersey. Who feels San Franciscan in San Francisco? Worse, Dr. Flicker becomes romantically (or at least sexually) interested in his new receptionist. He takes her out for drinks. One night at work he makes a pass. Is it played for laughs or is it simply played? No one involved—Flicker, Jasmine, Woody—seems to realize the magnitude of the moment. It could be a comedy scene out of “Everything You Always Wanted to Know About Sex*” except it’s horrible. Jasmine cries, “This is so ... embarrassing!” but doesn’t seem to realize this is her ticket out. It’s blatant sexual harassment. She could take him for everything. Shouldn’t Dr. Flicker realize this as well? In 2013?

At times, in “Blue Jasmine,” it almost feels like director and actor are at odds. Woody seems to find amusing moments that Blanchett finds tragic. In this battle, if it is in fact a battle, Blanchett wins. Hands down. I can’t recall a better performance of someone slowly losing their mind. Travis Bickle is a piker in comparison.

From one of her Computer Use 101 classmates, Jasmine accepts an invitation to a Sunday afternoon party (another oddity), meets a diplomat there, Dwight (Peter Sarsgaard), and pretends to be what she failed to become: an interior decorator. Hey, he just bought a place that needs work! So they go there. She pretends to be the widow of a doctor who had a heart attack. He, of course, is interested in more than her design. He proposes they go to Vienna together. Eventually he proposes.

Meanwhile, she’s convinced Ginger that Chili is no good for her so Ginger has started an affair with Al (Louis C.K.), a sound man, who, rather than meeting her one day, reveals by phone that, oh, didn’t I tell you? I’m married.

At this point I was thinking, “OK, so Jasmine is going to get out of it.” The movie will be the fall and rise of an awful person, who is restored to something like her previous status even as she brings her sister, who was helping her survive, low.

Nope. At the 11th hour, she’s revealed, to Dwight, to be a liar, while Chili shows his worth by taking Ginger back. The final scene is like the first scene—Jasmine talking about Hal—but this time she’s on a park bench, sans make-up, her hair straggly and wet from a shower, and no seatmate. She’s no longer talking about herself with someone simply there. Now she’s just talking to herself. The camera closes in and then the movie fades to black and everyone in the theater exhales.

Questions. The big third-act reveal is that Jasmine caused her own downfall. Hal was seeing another woman, their French au pair, but seriously this time. He loved her, he said. So Jasmine finked on him. She called the FBI about his investments, etc. (The scene where he’s arrested is great, by the way, as he goes from this monumental sense of entitlement to something approaching vulnerability.) But this reveal doesn’t have much bite, does it? I mean, wouldn’t he have been discovered anyway? Eventually? Like Bernie Madoff? Yet Jasmine gets the blame. She gets the blame even from Hal’s son (from a previous marriage), who is now working at a guitar store in Oakland—another nice coincidence. She shows up, and the former spoiled kid from the flashbacks seems content and well-adjusted and accepting his lot in life. Yet he still blames her for finking rather than blaming his father for creating the false world in the first place. Something wrong about this.

We get great performances throughout. Hawkins and Cannavale are so natural, so perfect, I could’ve happily watched an entire movie about them. Dice Clay has gotten good notices but I particularly like how Louis C.K., in a small supporting role, doesn’t adopt Woody’s rhythms, as many actors in Woody Allen’s movies do. His rhythms remain his own.

But Blanchett? Holy god. She’s acting the raw, three-dimensional pain of the world against what feels like a one-dimensional backdrop.