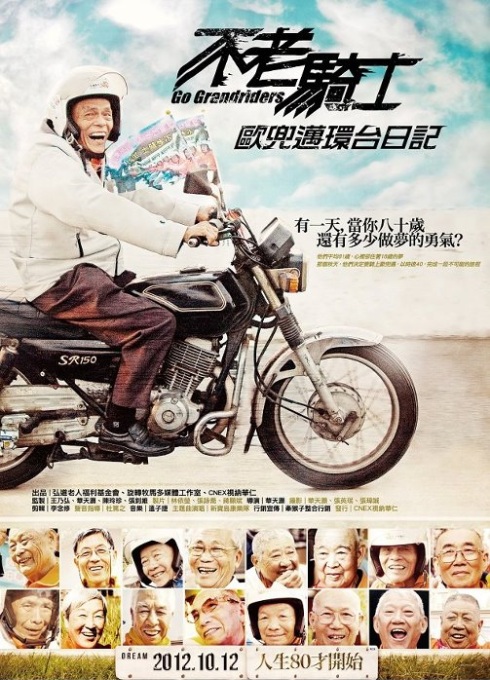 The most interesting aspect of “Go Grandriders” for me is less the tour of the coast of Taiwan—as 17 geriatrics, averaging 81 years old, ride motorbikes from Taichung, south along the west coast, and north along the east coast—than the stories they tell. Particularly the World War II-era stories.

Taiwan has a fascinating history in this regard. From 1895 to 1945, it was a Japanese colony, and during the war many Taiwanese actually fought for the Japanese, whose rule on the island was less problematic (read: genocidal) than it was on the mainland. Many Taiwanese actually liked Japanese rule. But the war ended, Taiwan reverted back to Chinese rule, and two years later Communist forces pushed Nationalist forces, the Kuomintang (KMT) led by Chiang Kai-shek, off the mainland and onto Taiwan, where the KMT stayed in power for decades. Thus, on this small island, you had native folks who spoke mostly Taiwanese and didn’t mind the Japanese, rubbing elbows with mainland folks who spoke mostly Mandarin and hated the Japanese. The 228 Incident, in which the KMT massacred Taiwanese citizens protesting government policies, didn’t help.

So I’m glad Hua Tien-hao made his documentary now rather than 10 years from now. In 10 years, most of these stories will be gone, but here, in “Go Grandriders,” a not-bad, mostly cute, sometimes too cute portrayal of 80-year-olds and their dreams, which became the highest-grossing documentary in Taiwan’s history, we have, among the 17, a man who trained Kamikaze pilots for the Japanese, as well as a former Nationalist soldier who came over in ’48. At one point, this is discussed: how, during World War II, one might have tried to kill the other. But quickly, too quickly, it’s swept aside, amid effusive smiles and declaration and handshakes. Inwei, shr bu hao yisi.

Too bad it wasn’t delved into deeper. That history won’t be around much longer. The trip is not without its comedy. “If you are currently on medication,” the riders are told at the beginning, “please bring it with you.” One man shakes his head because his wife packs 17 suits for him. Another injures himself because he falls asleep during the first leg.

The gung-ho, ja-yo captain of the trip, 87 years old, a former policeman, can’t make it past the first leg. He has a stomach ulcer, and the shaking of the motorbike causes internal bleeding. He’s hospitalized, then meets up with the participants a few days later. But he’s hospitalized again, and feels shame as they all visit him in his room. Even though he recovers in time to greet the riders at the finish line, the whole enterprise must have been bittersweet for him at best.

Another man, on the perilous eastern leg of the trip, with the highway reduced to two lanes, winds up hospitalized after what we assume is a collision with a truck. (I thought: Right, Taiwan traffic. Maybe two minutes on that phenomenon would’ve been good for international audiences.) Others are greeted as heroes at a local nursing home.

You get ordinary scenes. One man hides rom the others with an ice-cream cone, another checks out how his stocks are doing in the local paper. You get touching scenes: One man makes the journey with a framed portrait of his deceased wife in his wire basket. Whenever they arrive in a new town and are greeted with flowers (wrapped in plastic, of course), he puts the flowers in the basket for his wife. Is it all too ordinary? There’s some talk of death. “If no one died,” one man says, “it would be a crowded world.” I like that. But it’s as deep as the documentary gets.