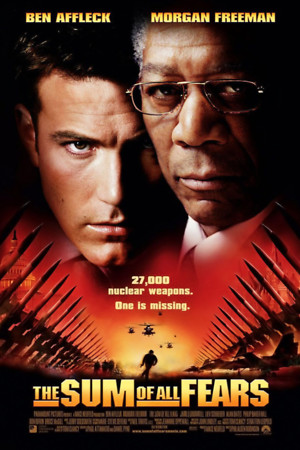 The last time we saw CIA analyst Jack Ryan — Harrison Ford, in 1994’s "Clear and Present Danger" — he was decidedly middle-aged and married as he tackled Colombian drug lords and corrupt U.S. politicians. In "The Sum of All Fears," which takes place in the present, Ryan (Ben Affleck) is suddenly young again, single and just starting his CIA career. We should all have such a fountain of youth.

Of course, back then, the plot of Tom Clancy’s 1991 novel "The Sum of All Fears," in which Arab terrorists explode a thermonuclear device at the Super Bowl in Denver, seemed far-fetched. Now it’s so prescient the Arab terrorists in the film have become neo-Nazis, Denver has become Baltimore and the Super Bowl is never mentioned.

Affleck is actually the third actor to play Ryan — Alec Baldwin originated the role in "The Hunt for Red October" — and he fills the role adequately if with less weight and gravitas than previous incarnations. He’s handsome, broad-shouldered, in love and full of quips.

When Alexander Nemerov (Ciaran Hinds) becomes the new Russian president, Ryan, who’s written a treatise on Nemerov, is plucked from his lowly analyst’s position to accompany CIA director William Cabot (Morgan Freeman) into meetings with high-ranking senators, then the Russian president, then the U.S. president (James Cromwell). Except for a necessary change of clothes, he handles his new scenery with aplomb, arguing with the most powerful men in the world that Nemerov is not the hawk they make him out to be.

Meanwhile an unexploded nuke, left over from the Yom Kippur War, falls into the hands of an Austrian neo-Nazi (Alan Bates). His idea: Ship it to the U.S., explode it, then sit back as the U.S. and Russia destroy one another, leaving the fascists to pick up the pieces.

Up to this point "The Sum of All Fears" is a smart action movie. The scenes between Affleck, as the abashed newcomer, and Freeman, as the tough-but-secretly-amused veteran, are particularly good.

But then it happens. The nuke goes off, sending shock waves that down helicopters, clobber automobiles and whip up furious sandstorms. The emotions of the audience are also whipped up as the East Coast is irrevocably violated and words like "ground zero" are heard once more. (This Sept. 11 echo is why "The Sum of All Fears" delayed its initial fall 2001 release until today.)

For a moment, the explosion actually raises the bar of the film. The first post-nuke scenes are remarkable for their silences, as if we were all deafened by the blast. Then, characters begin speaking again and the movie falls apart. Both presidents act stupidly, and Ryan races around to a) uncover the remainder of the plot, b) fight the remaining neo-Nazis and c) persuade world leaders not to destroy the world. Nobody worries too much about nuclear fallout, either.

Ultimately, the film is just too slick to properly convey the gravity of the situation it creates. A nuclear attack may be the sum of all fears, it seems to say, but it doesn’t mean we can’t joke about it 10 minutes later.

Originally appeared in the March 31, 2002 edition of The Seattle Times.