Where Michael Medved Went Wrong with ‘Hollywood vs. America’

OK, so I finally got around to reading Michael Medved’s “Hollywood vs. America.” Give me a few decades and I’ll get right on things.

What surprised me? I agreed with him more than I thought I would.

I think most Hollywood movies are good-vs.-evil heroic wish-fulfillment fantasies, and so much about the beauty of its stars that for the rest of our lives the rest of us feel like something the cat dragged in.

But our biggest disagreement is who we blame for whatever mess we think Hollywood is in.

Me: Hollywood’s a business, they’re trying to appeal to as many people as possible—to make as much money as possible—and so they come up with these wish-fulfillment fantasies about heroic men and beautiful women because that’s the story we want to see again and again. The fault is not in our stars but in ourselves.

Between 1965 and 1969 the values of the entertainment industry changed, and audiences fled from the theaters in horror and disgust.

A little background. In 1966, Jack Valenti, the newly appointed president of the Motion Picture Association of America, officially ended the longstanding Hays Code, which had banned, among other things, nudity, miscegenation, “sex perversion,” and “willful offense to any nation, race or creed”—or at least the white ones. In its place, he instituted a ratings system: initially G, M, R and X; eventually G, PG, PG-13, R, X and NC-17. From then on, characters on movie screens could swear, and take off their clothes. If you pricked them they bled and if you poisoned them they died. Movies could have sympathy for criminals and could ridicule clergy.

To Medved, that’s where everything went wrong. In 1966, Hollywood opened Pandora’s Box, filth came out, and most of us turned away. He writes:

While individual examples of the countercultural trend might achieve respectable box office returns (Bonnie and Clyde, 1967; Easy Rider, 1969; Midnight Cowboy, 1969; M*A*S*H, 1970), the general distaste for the industry’s emphasis on sex and violence provoked an unprecedented flight of the mass audience.

My thought while reading: Except there wasn’t an unprecedented flight of the mass audience.

Ah. But according to Medved, there was:

In 1967, the first year in which Hollywood found itself finally free to appeal to the public without the “paralyzing” restrictions of the old Production Code, American pictures drew an average weekly audience of only 17.8 million—compared to the weekly average of 38 million who had gone to the theaters just one year before!

Wow, I didn’t know that. Hollywood lost more than half its audience in a single year? And did nothing about it?

So where did Medved get those numbers? From the footnotes:

First, let’s admit it’s tough to get accurate box office data on almost anything before 1980. It’s all a little sketchy and the numbers never quite match.

That said, almost everything I’ve ever read on the history of box office disagrees with Medved/Steinberg. Here, for example, is a graph from George Lucas's Blockbusting: A Decade-by-Decade Survey of Timeless Movies Including Untold Secrets of Their Financial and Cultural Success: 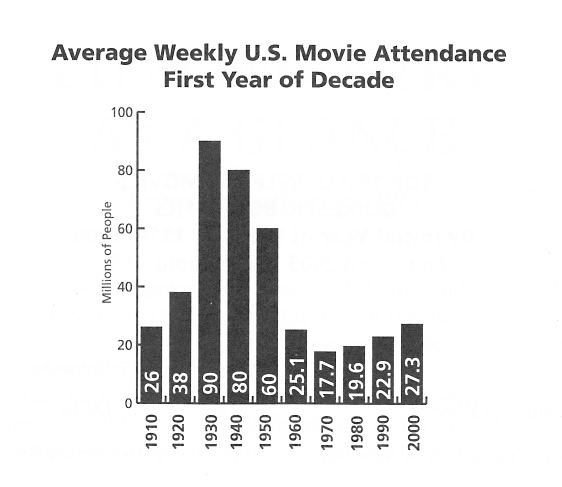 This is the agreed-upon history. From the late ‘40s to the mid-‘60s, fewer and fewer people went to the movies because of the following factors:

(Another factor, less commented upon, is HUAC’s assault on Hollywood, which tainted the brand. For many Americans, the question became: Why spend time and money to see something created by pinkos and fellow travelers? The great irony is that HUAC’s search for communists damaged a successful capitalist enterprise that 99.99% of the time promoted American values around the world.)

Another graph, from Michelle Pautz of Elon University in North Carolina, in her paper, “The Decline in Average Weekly Cinema Attendance: 1930 -2000,” suggests that attendance actually began to level off around the time Valenti and Hollywood got rid of the outdated Production Code: 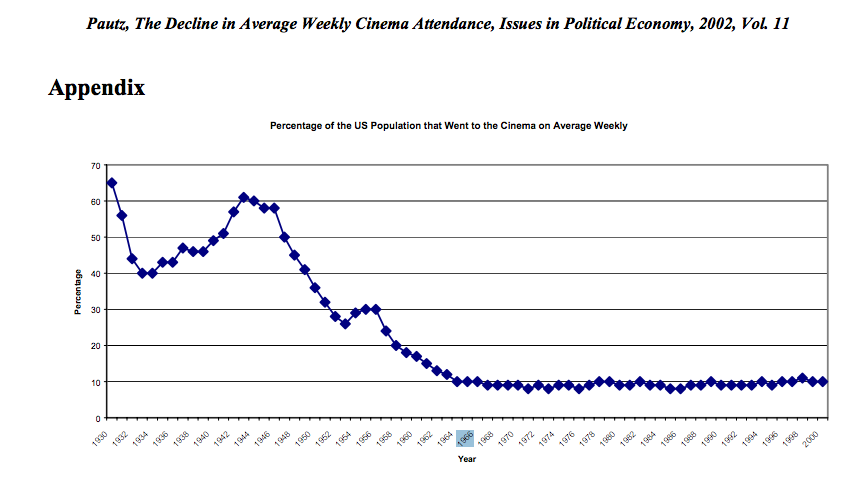 Movies survived the TV era by giving people what they couldn’t get on TV. In the 1950s, this meant Cinemascope and Technicolor and epics. In the mid-to-late ‘60s, it meant sex, violence and adult themes. This was the lifeline the movies used until Hollywood hit upon the summer blockbuster concept in the mid-1970s.

But there's an even more important source that disagrees with Steinberg: Steinberg.

During my online research, I came across a 2006 discussion on a message board devoted to arts and faith, in which one user quotes Medved’s 38/17.8 numbers, another challenges him, and the first essentially offers a mea culpa—linking to a LA City Beat article that refutes Medved’s numbers. Sadly, LA City Beat is no more, the links are broken, and I can’t find the original article or even its author’s name. (Let me know if you know who this is.) But the message board user did quote from the article:

If anyone can tell me how ticket prices can go up roughly 10 percent, box-office receipts can go up a little under 1 percent, and attendance drop by nearly 53 percent … well, please drop me a line.

So Steinberg doesn’t even agree with himself. In fact, he’s culling information from many different sources. But it’s only the average weekly attendance number, on which Medved based so much, and which comes from a study by the Opinion Research Corporation of Princeton, that includes a proviso from Steinberg:

These figures are only estimates of the average weekly number of American moviegoers. Industry statistics can never be exact here.

I searched to see if any book and/or movie critics at the time that “Hollywood vs. America” was published called out Medved on his suspect data. Nada.

I checked to see if Medved has since offered a mea culpa on his suspect data. Bupkis.

To be sure, Medved gets other things wrong, too. He goes on for pages about a 1990 Christian movie, “China Cry,” claiming it earned twice what Box Office Mojo says it grossed ($10 million vs. $4.2 million). He attacks B movies of the 1980s that aren’t worth a second thought, and ascribes shabby, countercultural motives behind Martin Scorsese’s desire to make “The Last Temptation of Christ.” He thinks R.E.M.’s song “Losing My Religion” is anti-religion and “The Simpsons” isn’t funny.

But this is the big one. He believes that the movie business, which has given us John Wayne, Clint Eastwood, Rambo, Arnold and Bruce Willis, puts left-wing ideology before money. It’s right there in that 38/17.8 number: the number that other numbers, not to mention logic, not to mention its original source, tells us is wrong. 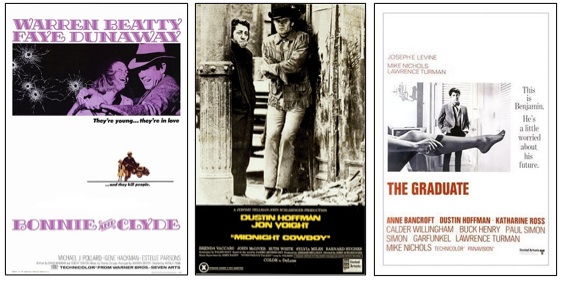 The movies that caused audiences to flee from the theaters “in horror and disgust,” according to Medved.