Is Bartosz Bielenia a shapeshifter? In Jan Komasa’s “Corpus Christi,” he plays Daniel, a 20-year-old criminal who pretends to be a priest in rural Poland, and throughout the character seems both immoral and holy, male and female, child and man. In the poster, he bears a slight resemblance to Pres. Obama … or Gilbert Godfried. It’s a shame his eyes are closed in the poster because in the movie his eyes are everything. They’re moist and sad and drink in everything; they draw us into this world.

“Corpus Christi” is a great film about a not-good person who becomes one. At least he does good things. He repairs a community. I think he enjoys what he does—he’s good at it—but don’t be fooled into thinking he’s a good kid. He’s not—not really. Maybe that’s why he makes such a good priest.

What we’re good at 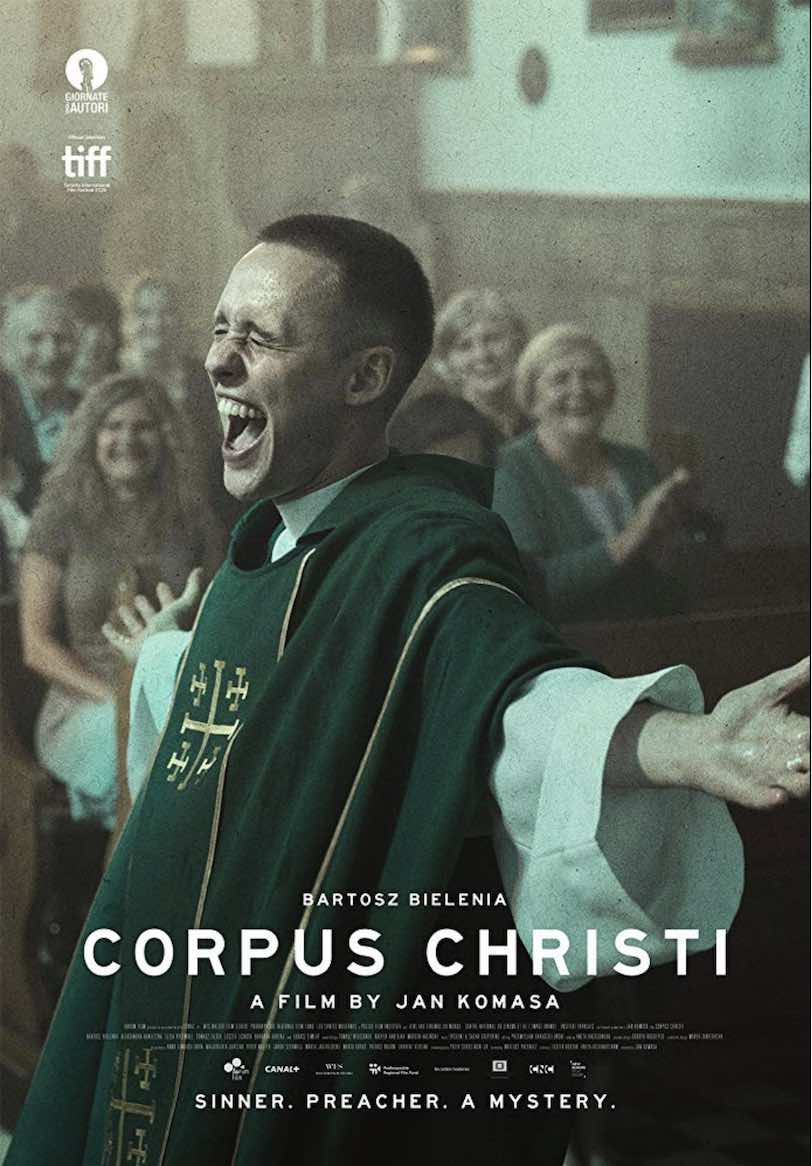 We first see him in a juvenile detention facility, where several boys gang up on one. Are they raping him or just beating him? Daniel isn’t the one, nor among the several; he’s the lookout, a nonentity. We also see him helping the priest, Father Tomasz (Lukasz Simlat), but I couldn’t help but wonder if his faith was genuine. As he sings and prays, I flashed on Alex in “A Clockwork Orange,” seeming pious during prison Bible study but happily imagining torture. But Daniel isn't that.

For the longest time, we don’t even know why he’s in there. Turns out he killed a guy, and that guy’s bigger older brother, Bonus (Mateusz Czwartosz), is now in juvey and wants revenge. Is that why Daniel is allowed out on work-placement? Or was it already scheduled? In his farewell, Father Tomasz urges him to follow the right path, but a quick cut shows Daniel doing shots and snorting cocaine in a nightclub, then banging a girl in the bathroom. On the bus to rural Poland, he gives the busdriver grief when asked to put out his cigarette. He’s that guy.

Was the priest ruse a way of getting out of working in the town’s sawmill? Or is he answering back against Eliza (Eliza Rycembel), the pretty girl in the church who assumes, from his manner and tracksuit, that he’s just another laborer? At the same time, he is drawn to the church. He goes on his own. He winds up calling himself Father Tomascz and proves a welcome help to the parish priest (Zdzislaw Wardejn), who seems a bit tired of it all, to be honest. Daniel is asked to do more and more, and when the priest has health issues Daniel is asked to fill in. He needs help with some of it—relying on Google to learn the confessional litany, for example—but overall he proves a natural.

It’s partly his rebelliousness. Prior to the dedication of a new factory, the town’s mayor/business leader (Leszek Lichota) tries to put the young priest in his place. A few minutes later, Daniel asks everyone—everyone—to get down on their knees for the factory’s benediction; then he leads a prayer against the sin of greed.

It’s partly the fact that he, too, is a sinner. He’s committed crimes, and is one the run. His off-the-cuff sermons are marvels:

You know what we’re good at? Giving up on people. Pointing the finger at them. To forgive doesn’t mean to forget. Forgive means love. To love someone despite their guilt. No matter what the guilt is.

He’s drawing this sermond from his own experience but is directing it at the town. Before he arrived, there was a late-night car accident—teens in one car, a middle-aged man in the other, everyone died, and for some reason the town blames the man and shun his widow. They send her hate mail and scrawl nasty graffiti on her house. It’s like Twitter but real life.

Eliza’s brother was one of the teens and she shows Daniel video from the night of the accident; the kids drinking and getting high. So why was the husband to blame again? Daniel gives her a look but she’s not accepting that reality. So with everybody. The townspeople flee the truth even as Daniel’s truth—his past—catches up with him. None of us are very good at this. We’re all sinners here.

The final sermon
What to make of the ending? I do like Daniel’s final wordless sermon before he’s returned to juvey. And just as he was the lookout at that earlier beating, so others look out as Bonus, who has six inches and maybe 75 pounds on him, tries to kill him. He fights back—that European headbutting thing—and is pushed, stunned and bloody, into the glare of the day, where he stumbles down a path even as a fire erupts behind him. That’s the end. It's abrupt and chaotic and maybe that’s the point. I'm still puzzling over it.

“Corpus Christi” is a beautiful film: quick and fascinating, deep and spiritual, violent and sly and sexy. It takes place in rural Poland but everyone can identify. The above sermon will never not have meaning.