I MEAN IT: SPOILERS

Now the bad: Both Iron Man and Black Widow are. Captain America is an old man, Hulk is diminished, and Thor is fat. Marvel giveth, Marvel taketh and Marvel girtheth. And they did it with a snap of their CGI fingers. 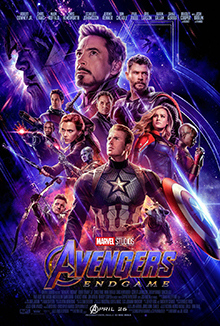 We all knew the others weren’t dead, of course. The question after “Infinity War” was never “Will they come back?” but “How will they come back?” How will Marvel do this without making it seem like a cheat? Like, you know, an entire season of “Dallas” being a dream?

Everyone had theories. From my review of “Infinity War”:

One solution is for one of our heroes to steal the glove with all the infinity stones, then reverse everything—either through time, or, you know, just willing it. Poof. Everyone’s back.

And that's what they do. After Captain Marvel (Brie Larson) rescues a CGI-emaciated Tony Stark (Robert Downey Jr.) from his powerless spaceship, and he berates Captain America (Chris Evans) for no good reason, the Avengers fly to Planet Thanos, find him scarred and limping, and cut off his gloved hand with the infinity stones in it. Ha! Except there are no infinity stones in it. He’s destroyed them. He brags about fate—that he is inevitable. Which is when Thor cuts off his head.

We’re about 20 minutes into the three-hour movie.

I like what the writers (Christopher Markus and Stephen McFeely) and the directors (Anthony and Joe Russo), do next. We get a shot of New York City and the beginning of a title graphic: It says “FIVE” and it just hangs on the left side of the screen and we wonder; Days? Months? They let it linger for a beat or two, and we’re thinking, no, not that.

Um yeah. About that.

The dispirited ‘20s
So what happens if you lose half of all living things in the universe? I imagine there’d be some job openings. Also the stock market would drop and companies wouldn’t make their quarterly earnings reports. I doubt Thanos took any of this into consideration.

But would the world turn into a kind of dispirited, global ghost town as the movie suggests? We get a camera pan over CitiField; it’s crumbling from disuse. Because? Right now there are about 7.5 billion in the world and if you halved that it would be 3.75 billion, which would take us to 1972 population levels. Kids might not believe this, but we had Major League Baseball in 1972.

(Hey, not for nothing, but did Derek Jeter crumble into ash? Or Donald Trump or Mitch McConnell? What if the Avengers had worked with Thanos rather than against him? “The first thousand names on the list are deal breakers, Thanos; those dudes have to go.” “OK.”)

As for Earth’s Mightiest Heroes in dispirited 2023?

Life might’ve continued like that, without any “Spider-Man: Far from Home” or “Black Panther 2,” if not for a rat.

One business that has done well in the post-Thanos era is the storage business. Apparently everyone’s hoping everyone will come back. In one such storage locker in San Francisco, a rat steps onto a panel of the machine Hank Pym (Michael Douglas) and Hope Van Dyke (Evangeline Lilly) used to make Scott Lang (Paul Rudd) “go quantum,” or whatever the hell it was, in the final scenes of “Ant-Man & The Wasp”—before they, too, were Thanosed out of existence, leaving him stuck there. The rat inadvertently sets him free. He returns to a world in which he’s among the missing—assumed to be dead. He finds his daughter. She’s now like 17. He looks the same, which is so Paul Rudd.

Indeed, because he was in the quantum realm, those five years to him were like five hours. And he thinks that’s the key to trying to reverse all this: bending/going back in time via “Pym particles.” The writers have fun pulling out the “time machine” pop-cultural references—from “Star Trek” to “Back to the Future” to “Hot Tub Time Machine”—but no one mentions “Superman: The Movie,” which is a shame. That’s basically what they’re doing but on a bigger scale, and with this caveat: They want to bring all six infinity stones to their time, put them in a Tony Stark-created glove, bring everyone back to life with a snap of the fingers, and then return the stones to their original spot so time can continue unimpeded to the moment when they in fact do this. Otherwise they won’t do this because the continuum will be disrupted.

This basically allows our MCU heroes to revisit MCU movies:

We get a smart reboot of the elevator scene from “Captain America: The Winter Soldier” (one of my fave MCU movies), and some fun stuff with 2012 Hulk and the elevator, but Cap and Iron Man lose one the stones to Loki; so they use their remaining Pym particles to get back to a 1970 army base, which is secretly S.H.I.E.L.D. headquarters, where they hope to steal: 1) the infinity stone they know is there, and 2) more Pym particles with which to return to 2023.

There, Tony runs into his dad (a CGI-youthenized John Slattery), which continues the movie’s theme: lineage; parentage. That’s throughout the time travel. Thor has a heart-to-heart with his mom (Rene Russo) on the day she dies, as Tony does with his dad on the day Tony is born, as does, I suppose, Nebula, whose 2014 incarnation can access the memories of her 2023 self—meaning Thanos is able to see his dreams realized, and plots to stop them being undone. So instead of 2023 Nebula returning with War Machine, it’s the 2014 version, who is still loyal to her father. And after Hulk puts on the Stark-created infinity gauntlet and brings everyone back to life (the ones Thanos thanosed out of existence), 2014 Nebula uses the time portal to transport 2014 Thanos, and his ship, and his army of slithering minions, into the present to fight the remaining Avengers—initially, Thor, Cap and Iron Man—Hulk being incapacitated from using the infinity gauntlet.

Cap was always a favorite of mine from 1970s comic-collecting days, and he gets some great moments here. At one point, he wields both his shield and Mjolnir. (How? A nearby nerd told me after the movie it was implied he was worthy in “Ultron” when he budges it a bit.) He gives Thanos his best battle, nearly finishing him, but instead winds up busted, bruised, bloodied and carrying a shattered shield. Which leads to his greatest moment: rising slowly, ready to continue the hopeless fight—which becomes less hopeless when Doctor Strange teleports the rest of the Avengers—alive!—to their location. Let the battle royale begin!

Or to use the ’70s Marvel comic-cover locution: Let begin the battle royale!

Except the true battle is for the infinity gauntlet, which becomes like a hot potato or fumbled football—forever kicked forward and back. Bad Nebula has it, then Ant-Man, then ... I lost track. Nobody puts it on. Maybe they saw what it did to Hulk? Besides, it had served its purpose. What else could it do?

It could finally end the battle with Thanos by ending Thanos. And who better to end it than the guy who began it all for us back in 2008? Iron Man, the superhero whose true power is being quicker and wittier than everyone around him. Remember “Avengers”?

We get similar wordplay here. Thanos puts the gauntlet on, declares “I am ... inevitable” and snaps his fingers triumphantly. Except nothing. Because Tony reveals he’s got the gems on his gauntlet; and he declares—in a callback to the famous last line of “Iron Man”—“I am ... Iron Man,” and snaps his fingers. And there goes Thanos’ army and his subordinates—into dust. The last to go is Thanos himself. Inevitably.

How Marvel Studios is like Tony Stark
Then it’s a taste of ashes for us, too: It was all too much, and Tony dies. Back in April 2008, the month “Iron Man” premiered, I did a piece for MSNBC called “Top 5: Superhero Casting” and went with Christopher Reeve, Toby Maguire, Hugh Jackman, Christian Bale and Douglas Fairbanks. Not bad. But another era. It’s a much tougher list to make now but even with all the extra competition Downey Jr. might top it. No one is quicker verbally. It’s why Tony gets away with so much. By the time you unpack everything he’s said he’s somewhere else.

There’s a need for the MCU to move on, so I guess this is the right call. But some part of me feels we didn’t get enough Iron Man vs. Captain America. It’s not just the clash of personalities; they represent the two halves of America: its ideal (democracy/Cap) and its messy reality (capitalism/Iron Man). It felt like more could be said with this dichotomy—things that might help explain us to us.

We also lose Cap. He returns the infinity stones to their previous locations (to not disrupt the timeline), then stays in the past to be with Peggy Carter (Hayley Atwell). To disrupt the timeline? Seems like a weird call. So instead of Steve Rogers returning via the “time machine” he does it the old-fashioned way—as an old man sitting on a nearby bench. He’s got his shield with him and gives it to Sam/Falcon (Anthony Mackie), who will, one hopes, become the new Captain America in a new Captain America movie. Hopefully they have the balls to do it right. Don't ignore race and racism: reflect the outrage of a segment of the country that Captain America is now black. Should be easy. Just read all the alt-right vitriolic comments on the MCU’s various social media feeds. Turn those guys into the villains they are.

More resolutions: Thor lets Valkyrie (Tessa Thompson) become ruler of Asgard, Norway, then joins the Guardians of the Galaxy—or the Asgardians of the Galaxy, as he calls them. At Tony’s funeral, there’s a sweet scene with Tony's daughter, Morgan (Alexandra Rabe), and Happy Hogan (Jon Favreau, director of “Iron Man”), talking cheeseburgers, another call-back to “Iron Man.” Man, they do this stuff so well.

But did they pull it off? Here’s the thing: If you’d told me beforehand the resolution, involving time travel and sci-fi bullshit, I would’ve been disappointed. But Marvel Studios is like Tony Stark: They get away with a lot because they’re quick-witted, charming, and ultimately heartwarming. By the time you unpack everything they’re doing (wait, shouldn’t Cap, Iron Man and Thor be able to take down an ungloved Thanos?), they’re doing something else.

I was occasionally bored. Dividing the Avengers into teams meant there were teams I was inevitably less interested in. Black Widow and Hawkeye? Plus why send them to that far-off planet that always reminds me of the Bridgekeeper scene from “Monty Python & the Holy Grail”? How did they get stuck with that one? Wouldn’t one super/one skilled be a better model? Instead, three supers get NYC 2012 and two skilleds are sent to a far-off planet. Not smart.

Other questions remain. Like: What year is it? 2023? If so, why are all of Spidey’s high school friends the same age they were in 2018? Did they all wind up being thanosed? And why didn’t Captain Marvel just put on the infinity glove? Isn’t she part infinity stone herself? And, hey, did we ever get 2023 Nebula back?

Overall, though, for three hours I was entertained and even moved. Afterwards, for much of the day, I felt a little sad, like I’d lost something. I don’t know if this means Tony, Steve and Natasha, or if it means this part of the MCU, which is forever done. I don’t know where they go from here; I just hope the continuity continues.