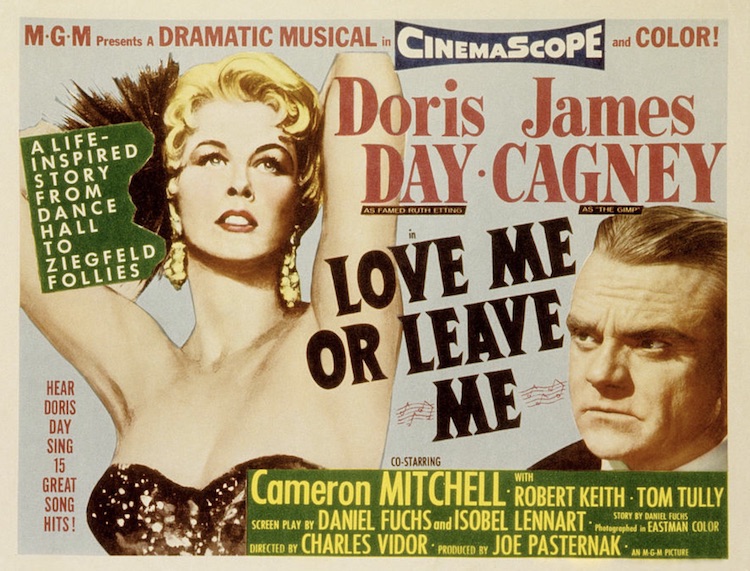 There’s a line near the end of this that made me laugh out loud. At the grand opening of a nightclub, “M.S.,” its proprietor and namesake, Marty Snyder (James Cagney), steps out of a car and is arguing with a friend when a young autograph hound spies him and shouts: “Hey, that’s the guy that shot the guy!”

That is so good. Is it based on anything? A famous Hollywood story? Or did it come from the imaginations of screenwriters Daniel Fuschs and Isobel Lennart? Or director Charles “not King” Vidor? I’m finding nothing online. Anyway, it was the best line in the movie.

A lot of firsts and lasts with this one. Released in June 1955, “Love Me or Leave Me” was Cagney’s first Cinemascope picture; it was the first time he was second-billed since the 1930s (apparently at his insistence), and it garnered him his third and final Oscar nomination for lead actor. (He lost to another Marty: Ernest Borgnine.) It was a huge hit—the eighth-biggest of the year—while its soundtrack was the No. 1 album in the country for six months: from early August to late January 1956. (It was replaced by “Oklahoma!,” which was replaced by “Belafonte,” which was replaced by … wait for it … “Elvis Presley.” And now you know the rest of the story.)

“Love Me or Leave Me” was also the second-to-last time Cagney played a gangster, and he may never have been scarier. Imagine Cody Jarrett hopelessly in love. The movie is based on a true, tempestuous love story that Hays-Code Hollywood probably couldn’t tell properly, so, in between socko Doris Day numbers, they made it about an abusive relationship. It doesn’t mesh. It’s kind of exhausting, actually.

Mean to me
Background: Singer Ruth Etting said she married gangster Moe “The Gimp” Snyder “9/10 out of fear and 1/10 out of pity.” She feared that if she left him, he would kill her.

Cagney’s Marty has elements of the real Moe, but Ruth has been cleaned up. From IMDb:

Ruth Etting was a kept woman who clawed her way up from seamy Chicago nightclubs to the Ziegfeld Follies. It would require her to drink, wear scant, sexy costumes and to string along a man she didn't love in order to further her career. There was also a certain vulgarity about Etting that she didn't want to play. Producer Joe Pasternak convinced Day to accept the role because she would give the part some dignity that would play away from the vulgarity.

Except Ruth’s lack of vulgarity makes the abuse seem worse. Day’s dignified Ruth is a declawed cat being messed with by a junkyard dog. One yearns to see the claws come out.

In 1920s Chicago, Etting is a dime-a-dance girl who doesn’t like men who paw at her, which is all of them, so she’s fired. Snyder, shaking down the proprietor, takes a shine and uses his connections to get her singing gigs, expecting some quid for his quo, but she keeps putting him off. Until he’s tired of being put off. But even then nothing comes of it. In her dressing room, he says he’s stuck on her, she says she’s not on him, not yet anyway (that’s the lie), and the higher she rises the more jealous he becomes: of potential rival agents and potential rival lovers—like that piano player Johnny Alderman (Cameron Mitchell), with cheekbones like diamonds.

Up the ladder she goes: from singing, to headlining, to radio, all the way to New York City and the Ziegfeld Follies. For the real Etting, that was 1927 and she’d been married to Snyder for five years; here, they haven’t even kissed. Opening night at Ziegfeld, Marty rushes backstage during the middle of her performance, has his way blocked, decks a tall guy (as Cagney is contractually obligated to do), and is hustled out, huffing and puffing, between two other guys. Back at her hotel room, we find out he’s particularly mad at her for not sticking up for him. “You walked away!” he shouts. He talks about the debt she owes him but she says there’s no way she can pay it off. “Ain’t there?” he cries, then throws her down on an ottoman and kisses her. She stumbles away, in tears.

This was supposed to be a rape scene, believe it or not. According to IMDb, “As originally filmed, Cagney slammed her against a wall, savagely tore off her dress, and after a tempestuous struggle, he threw her onto a bed and raped her.” Can’t quite see that happening in a 1955 movie, but its removal means after one kiss she’s suddenly undone—lifeless. She marries Marty, quits Ziegfeld, tours with Marty. He tells her he’ll take care of her, and, dead-eyed and dead-voiced, she responds: “You don’t have to sell me. I’m sold.” Great, sad line.

Eventually he lands her a gig in Hollywood. Guess who’s there? Johnny Alderman of the cheekbones. He’s musical director for the movie she’s working on, Marty doesn’t like it a bit, and for some reason she chooses this moment to fight back.

Snyder: That’s the way with those phonies: You gotta let ’em know who ya are.
Etting: Who are you, Marty?
Snyder: What do you mean?
Etting: What have you accomplished? Can you produce a picture? Have you done one successful thing on your own? Just who do you think you are?

Ouch. In front of her he makes a joke but behind the scenes he’s seething. His good-natured right-hand man, Georgie (Harry Bellaver), tries to make him feel better by saying he was a big man in Chicago but here they think Ruth’s his meal ticket. Doesn’t go well. Marty decks him. Then he gets an idea. He’ll open his own nightclub! That’ll make him a big man. Everyone else thinks it’s a lousy idea but now he’s too busy to hover around Ruth, so her romance with Johnny blossoms.

That sets up the rest. He tries to get Johnny fired from the movie, she objects, he slaps her, she leaves him for good. He assumes the worst: cheekbone dude. And he finds them in a doorway clinch. So he shoots him.

Shaking the blues away
One assumes some kind of comeuppance for all of Marty’s crimes but it doesn’t quite arrive. Because it’s based on a true story and MGM wanted everyone to sign on? Because Cagney’s fans needed to be placated? Marty is a monster, truly—by the end we’re as twitchy around him as Ruth—but after he’s bailed out on attempted murder charges he discovers that Ruth is actually headlining the opening of his nightclub. All his friends arranged it! And Ruth agreed to it! (She feels she still owes him.) All of which just pisses him off—it’s the meal-ticket thing—but eventually he calms down. And leaning against the bar at his brand-new nightclub, he takes it all in, while the girl he abused belts out the closing number for him.

And they all lived happily ever after.

Again, Day is fine if miscast; and while she’s got great pipes, the musical numbers have that hammy, Eisenhower-era cheerfulness at odds with everything else going on. Mainstream 1950s movies—selling Technicolor and Cinemascope and uplift—really were the worst.

Cagney, though, is great. I don’t know if he got the Oscar nom for the limp—you know how Academy voters are—but in those early confrontations there’s such a look of betrayal and contempt and anger in his eyes. He’s never not in this guy’s fucked-up worldview. It’s as if he got the limp from the massive chip on his shoulder.

This is third time Cagney played a ’20s gangster—“The Public Enemy” in 1931 and “Roaring Twenties” in 1939—and we get other echoes from Cagney pictures, too. Setting up his club, isn’t it a bit like Bat setting up his bar in “Frisco Kid”? Marty doesn’t speak Yiddish but he does get off a “Mazel tov” before Ruth headlines her first show. And I don’t know if this was intentional or not—if the phrase was already in the cinematic lexicon—but before her first show, Ruth asks the piano player, Johnny of the cheekbones, how she looks. His reply? “Top of the world.”