I’d love to see this on a double-bill with “Here Comes the Navy,” James Cagney’s 1934 flick about a smart-ass riveter who enlists to get back at a by-the-book officer (Pat O’Brien) but eventually becomes a team player aboard the U.S.S. Arizona—a real-life ship that was destined to sink at Pearl Harbor. Those early military Cagneys were always like that. He’s the cocky loner who either learns to fit in (“Navy,” “Devil Dogs of the Air”) or sacrifices himself in the final act (“The Fighting 69th”; “Captains of the Clouds”). Now look at him: in charge of the whole shebang.

He plays Admiral William “Bull” Halsey, who took command of American forces in the South Pacific in Oct. 1942, but I still kept hearing echoes of “Here Comes the Navy.” There's Pearl Harbor, for one. Halsey’s ship, the U.S.S. Enterprise (yes), was scheduled to return to Pearl Harbor on Dec. 6, 1941 but was delayed by storms and thus avoided the fate of the Arizona. There's another by-the book officer, too. Except now he's a subordinate, Capt. Black (Ward Costello), who assumes he’ll be reassigned when he bucks Halsey’s idea to move ground troops without going up the chain of command. Halsey assures him that's not the case: “If we both thought exactly alike, I wouldn’t need you.”

The movie focuses on the five weeks between Halsey taking command and the battle for Guadalcanal. All the battles happen off-screen. It's an indie movie, basically. It's about what makes a great leader: keep your door open, listen to everybody, do what’s necessary, and inspire those in your command.

You know how some men, as they age, gravitate toward non-fiction and history, particularly military history? Cagney’s career is a bit like that. The first non-fiction character he played was George M. Cohan in 1942, a role he resurrected 13 years later for a cameo in Bob Hope’s “The Seven Little Foys.” But that was it for nearly 60 movies. Until, in his five final flicks, he played two historical men: Lon Chaney in “Man of a Thousand Faces,” and Halsey here.

“Gallant” even feels like non-fiction. It’s a docudrama, sticking to the facts, and heavy on narration. It opens with an all-male chorus, the Roger Wagner Chorale, singing and humming a somber sailors song (“Away, away, away he went/To deep and salty water”), before an official ceremony aboard an aircraft carrier on Nov. 22, 1945. It’s Halsey’s retirement ceremony—as it nearly was Cagney’s. (It’s his second-to-last feature.) Halsey reads the opening of the official letter of his retirement in clipped tones before the narrator, producer-director Robert Montgomery, a longtime Cagney pal, takes over and tells us about Halsey.

He was born in Elizabeth, New Jersey, 62 years ago, this date. Graduated from the United State Naval Academy at Annapolis in 1904. There were 62 men in his class. Scholastically, he stood 43rd. His speech is salty. On his right shoulder there is a tattooed anchor. He once owned a parrot. He wears the wings of a pilot, earned at the age of 52. He is a sailor who has always been welcome on any ship at any time in any ocean.

Some of this leans toward cornball, but it’s effective. Better, Montgomery keeps doing it with secondary characters. Visiting the troops, Halsey chats with a pilot, Capt. Joseph Jacob Foss, who, Montgomery tells us, “destroyed as many planes as Eddie Rickenbacker” in WWI and later became the 20th governor of South Dakota. (Foss feels like a movie himself. He was also the first president of the American Football League and president of the NRA.) We meet Private First Class Eric Lauder who “mans the 50-caliber machine gun that was assaulted early this morning. In 15 minutes, he killed 38 men. He is 19 years of age.” Later, Montgomery adds, “Three men in that squad will survive the battle for Guadalcanal. Private First Class Eric Lauder is not one of them.”

Such narration doesn't leave out the enemy. Halsey’s counterpart, Gen. Isoroku Yamamoto, is “Born of seafaring stock on an island north of Japan, April 4th, 1884. He graduated from the Japanese Naval Academy in 1904. Americans who knew him as a naval attaché in Washington, D.C. remember him as an excellent poker player. He was especially good at bluffing.” Then we watch him taking pictures of a crimson hibiscus with his Leica camera, and trying to outmaneuver Halsey.

In this way the movie reminded me of “Balance of Terror,” the first-season “Star Trek” episode, which is essentially a cat-and-mouse game between two leaders, Capt. Kirk and the unnamed Romulan Commander (Mark Lenard). Here, too. All the Americans may call the Japanese “Japs,” as everyone did, but the tone of the movie is restrained and respectful. The Japanese speak Japanese, often untranslated.

Robert Montgomery is an interesting case himself. He came from money but his family lost it during the Depression and he tried several careers before going into acting. He was tall, genteel, well-dressed, and successful—starring in “Private Lives,” “Mr. and Mrs. Smith” and “Here Comes Mr. Jordan,” among others. He was both staunch Republican and union man—twice leading the Screen Actors Guild. While producing and hosting the long-running TV show “Robert Montgomery Presents” from 1950 to 1957, he became the TV consultant to Pres. Eisenhower—the first such in history. He was, sadly, a friendly witness before HUAC in 1947, but he also served in WWII in both the European and Pacific theaters. Doubt there are many men who were at both Guadalcanal and D-Day as he was. Awarded the Bronze Star, he returned to Hollywood to star in and help direct “They Were Expendable,” a solid war movie. “The Gallant Hours” is the last movie he directed.

We get too many shots of men admiring Halsey after he leaves them, but it’s not awful, and the movie keeps leaning on verisimilitude rather than drama. Guadalcanal gets nightly visits from “Washing Machine Charlie,” a real-life Japanese pilot whose twin-engines were out of synch to make them louder and keep the Americans from sleeping. When Charlie first shows up, Halsey doesn’t think he’s worth getting out of bed for. Then the bombing continues, shaking his bed. For a moment I thought he was going to be one of those crazily brave commanders like Patton or Bill Kilgore in “Apocalypse Now,” acting like they’re invulnerable, shooting at planes from the ground. But no, he joins the others in an air-raid shelter. Or tries to. It's dark, he's told it's full up, and rather than pull rank he runs to another one—also dark. He bums a cigarette and a light, then asks how long the bombing goes on. One to two hours, he’s told. “You’re new,” the soldier states. Halsey pauses. “Yeah. New.” You expect another big reveal—whoa, it’s the Admiral—but it doesn’t come. Instead, the narrator simply tells us about the soldier—a professional ballplayer who gets wounded, never rises higher than Class B, blames the wound. All of this is admirably unsensationalistic for a war film.

I thought Yamamoto’s history of bluffing—and Halsey’s awareness of same—would come into play more, but if anyone is good at bluffing here it’s Halsey. He has the lesser hand but attacks Japan’s forces when caution dictates retreat. Of his two carriers, he loses the Hornet while the Enterprise is damaged. At this point, his officers suggest an evacuation plan since they’re so vulnerable, but Halsey assumes Japan won’t follow up because they tend not to.

My favorite scene is when Lt. Commander Roy Webb (Richard Jaeckel) wants to resign his commission because he lost nine planes and nine men:

Halsey: You think the job requires a great man. Well, I have news for you. There aren’t any great men. There are just great challenges that ordinary men like you and me are forced by circumstances to meet. Now, you’ve proved you can get the job done. You’re hooked by your own record. In short, you don’t have any choice.
Webb: Sir, I lost nine planes yesterday.
Halsey: I lost the same nine planes, and 17 others to boot. Plus one destroyer, two submarines with all hands, two LSTs, and God know how many ground troops. Do you want me to go on?
Webb: [pauses, the gravity of the situation on his face] No, sir. I guess I … I just had the feeling I was alone.
Halsey: You were. And you will be.

I love every bit of that.

Just great challenges
Cagney got to spend a few hours with Halsey, who died before the movie opened, and noticed he made few extraneous gestures—which he felt true of most great commanders. “They are inevitably very self-contained men, so much depending on their demeanor and body language. They hold it in yet are consummately natural and honest in temperament.” 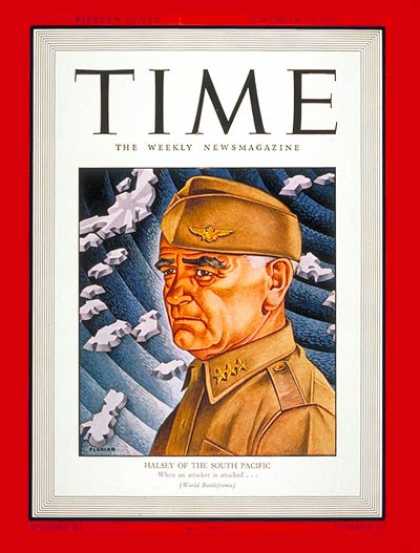 Known for going big, Cagney forced himself to be understated: “I had certain mannerisms, acting mannerisms, that I’d built up through the years playing all those rough characters,” he says in John McCabe’s biography. “So I had to lose those, and I told Bob whenever he even saw the hint of one to stop me and we’d shoot all over again.”

Dennis Weaver provides the movie’s color as Halsey’s aide, Lt. Commander Andy Lowe, a Southerner with charm. We get an interesting “Mister Roberts” echo when Lowe wants to leave Halsey for combat aboard Capt. Bailey’s ship and Halsey says, “Unfortunately, I’m used to you.” A second later he relents and lets him go. There’s a running gag about Halsey’s fear of needles, his swimming prowess is mentioned, his mostly nondescript officers are measured and admiring. We don’t get his salty language—Production Code—nor his pursuit of women, which is apparently how he got his nickname. The few women in the film—less than 30 seconds of screentime, I'd guess—are pursued by Weaver’s character.

Halsey was world-famous during the war—he made the cover of Time in 1942 and 1945—and this carried over into the decades immediately. In “Bridge on the River Kwai,” William Holden makes an Admiral Halsey joke, and on “McHale’s Navy” a character’s catchphrase is “What in the name of Halsey is going on?” He’s a title character in Paul McCartney’s 1971 hit song “Uncle Albert/Admiral Halsey” and he’s been played on screen by Cagney, James Whitmore (“Tora! Tora! Tora!”), Robert Mitchum (“Midway” (1976)) and Dennis Quaid (“Midway” (2019)). But I think his legacy has faded for my generation and those after ours. We all know Patton because of the movie but Halsey less. Or maybe Army trumps Navy in Hollywood storytelling? Cheaper, for one. What’s the cost of putting combat troops in a jungle? But you try making an aircraft carrier.

This is a good, measured movie that’s worth watching, but it feels like Halsey needs a Hollywood revisit.