There are so many James Cagney homages here it’s as if they knew it would be his last movie. Among them:

Then there's Cagney doing fellow Warners gangster Edward G. Robinson. When MacNamara finds out the boss’ daughter in his charge is schwanger, he cries “Mother of mercy, is this the end of little Rico?” I about died when he said that—though they did get it slightly wrong. There’s no “little” in the original. 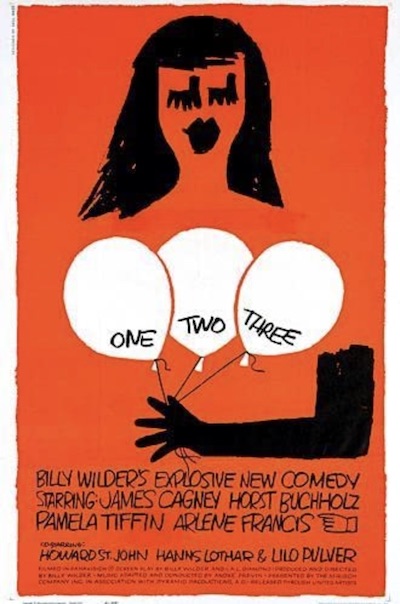 All of that is fun, and “One, Two, Three” should be fun—a wacky, hell-bent, Cold War comedy full of Coca-Cola and piffle. Its current numbers certainly look good: 91% from critics on Rotten Tomatoes, a 7.9 rating from IMDb users. But to me it’s an overload—too fast and furious. Near the end, you just want peace and quiet.

“Did you ever tell Cagney that he was yelling?” Cameron Crowe asked director Billy Wilder in his book Conversations with Wilder. “Because he’s so loud sometimes.” Wilder passes the buck:

We had to go with Cagney, because Cagney was the picture. He really had the rhythm, and that was very good. It was not funny. But just the speed was funny. The speed was very good, how Cagney figured it out. The general idea was, let’s make the fastest picture in the world, and give the actors, in order to make it seem fast, some slower scenes, too.

Yeah, no. According to Cagney, he warned Wilder about the frantic pace. He’d been there before—with producer Hal Wallis in the 1938 screwball comedy “Boy Meets Girl.” He knew you needed moments of rest but Wallis insisted on taking it faster and faster until leaving the dailies one day Cagney asked Ralph Bellamy: “Would you tell me what I just said? I couldn’t understand a word.”

In the “One, Two, Three” commentary track, film historian Michael Schlesinger says the pacing came from Wilder, who wanted the picture to be molto furioso: “100 miles per hour on the curves and 140 on the straightaway.” His goal was to make a movie faster than “His Girl Friday,” and maybe he did, but he didn’t make a better one. That should’ve been the goal. Plus Wilder’s line about having to go with Cagney? Not sure what he means. Cagney was a legend, sure, but hardly boffo box office at this point. An early poster not only didn’t show Cagney, or Buchholz, or the girls, it showed Wilder, forlorn, sitting on a step ladder and holding balloons. (Mouse over the poster above to see it.) Has that ever been done before? Ignoring stars for the director on a movie poster? You kind of get it. Wilder was coming off as great a run as any director, having made, in the previous 10 years, “Sunset Blvd.,” “Ace in the Hole,” “Stalag 17,” “The Seven Year Itch,” “Witness for the Prosecution,” “Some Like It Hot” and “The Apartment.” But all of it belies the idea that Wilder had to go with Cagney.

A shame. If Wilder had slowed the tempo, and Cagney’s and Buchholz’s characters weren’t yelling at each other for the final third, the movie might’ve been the classic some folks think it is.

At the start, C.R. MacNamara wants two things: to schtup his blonde secretary, Fraulein Ingeborg (Liselotte Pulver), while his wife and kids are on vacation; and to be assigned the London office, the head of European affairs for Coke, which he feels is his due. Then the boss in Atlanta asks him to look after his 17-year-old daughter, Scarlett Hazeltine (Pamela Tiffin), while she’s in Berlin. That puts a kibosh on the first wish—he needs his wife in town for that—but he hopes it’ll lead to London. (I love how every time MacNamara talks up London, Cagney is nonchalantly wielding a very British umbrella over his shoulder.)

Scarlett turns out to be a boy-crazy handful and winds up staying for months, but things seem to quiet down: she’s going to museums, learning about culture. Then the day before Mr. and Mrs. Hazeltine (Howard St. John and Lois Bolton) are to arrive, MacNamara discovers that Scarlett has been: 1) spending nights in East Berlin, where she’s 2) being indoctrinated into communism by Piffl, to whom she’s 3) married.

Thus the machinations begin. MacNamara plants pro-American propaganda on Piffl’s motorbike (Russki Go Home balloon, Yankee Doodle clock, Wall Street Journal) so he’ll be picked up by the East German police; then he has evidence of the marriage removed from official files. Done and done.

Which is when he finds out that Scarlett is schwanger: pregnant. His machinations have essentially made the boss’ daughter an unwed mother. So now he has to un-machinate everything he machinated. With the help of a triumvirate of comic Russians (reprised from Wilder’s “Ninotchka”?), he gets Piffl released from East German police and the marriage reinstated, but that puts him back at square one: how to make this scruffy, strident communist presentable to Mr. and Mrs. Coca-Cola? It involves manicures, haircuts, bespoke suits and buying an aristocratic name from the penniless Count von Droste Schattenburg (Hubert von Meyerinck, voiced by Sig Ruman). Piffl fights him at every step, which is where we get all that yelling, but once the parents arrive he acts the proper capitalist. More, he acts like MacNamara, forever snapping his fingers to get things done, and Hazeltine is so impressed he gives Piffl the London job. MacNamara is forced to return—with his family!—to the home office in Atlanta. Cue Pepsi joke and Cagney’s final shout at the screen: Schlemm-ahhhh!

And yet the pacing. And the shouting.

Apparently Wilder first wanted Cary Grant—another fast talker—for MacNamara, and I could see that working better, since fast-paced Grant is generally funnier than fast-paced Cagney. Buchholz would still be a problem—he’s not funny at all—but maybe he would’ve worked better with Grant? I don’t know how he felt about Cagney but Cagney hated him. From John McCabe’s biography:

The role of the young Communist is played by Horst Buchholz, who has the unique distinction of being the only actor James Cagney actively disliked in all of his professional career. Said Cagney: “I got riled at S. Z. Sakall in Yankee Doodle Dandy for trying to steal a scene, but he was an incorrigible old ham who was quietly and respectfully put in his place by Mike Curtiz. No harm in the old boy. But this Horst Buchholz character I truly loathed. Had he kept on with his little scene-stealing didoes, I would have been forced to knock him on his ass, which I would have very much enjoyed doing.”

That animosity comes through, probably too much, cutting off potential laughs. 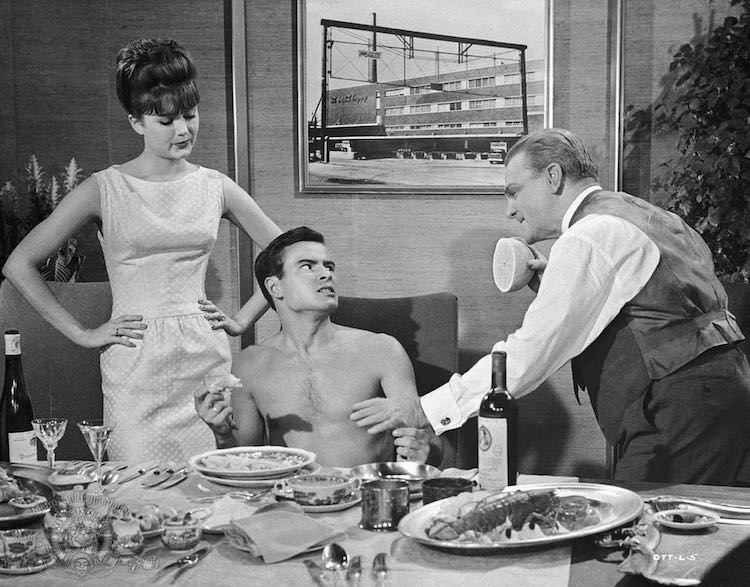 Feel the hatred? Three decades after Mae Clarke, Cagney threatens to do it to Horst Buchholz, who actually deserved it.

The women are great. Cagney singled out Pamela Tiffin for some serious high praise—comparing her comedic talents to Carole Lombard, Kay Kendall and Lucille Ball. Pulver is also great, with her smarts, chewing gum, knowing indifference. I like how she pulls her skirt back down over her knees when MacNamara’s wife phones.

My favorite is Arlene Francis as MacNamara’s wife, Phyllis, punctuating each scene with a sardonic rejoinder, and deflating her husband with a droll “Yes, mein fuhrer.” Her pacing gives the movie its necessary pauses. (She’s the pause that refreshes.) She also gets off some of the best lines. Early on, when MacNamara is wheeling Scarlett away from a French pilot, the pilot turns to Francis and says, “Madame, I appeal to you as a woman …” She, with a smile and flirtatious wave: “As a matter of fact, you do. Au revoir!” A shame she didn’t act more.

The supporting men are good, too: Hanns Lothar as MacNamara’s heel-clicking secretary Schlemmer; Leon Askin, the future Gen. Burkhalter of “Hogan’s Heroes,” as Peripetchikoff, one of the Russians. Wilder and his screenwriting partner I.A.L. Diamond have to thread through a lot of problematic stuff (Nazi past, Cold War present, sexual politics future) to find comedy, and they don’t do a poor job of it. The heel-clicking is good; the German office workers standing at attention every time MacNamara enters the room is good. But the “What did you do during the war, Schlemmer” conversations? That’s a little iffy. Love Piffl’s name. Just the name. I also love Scarlett blowing up “Yankee Go Home” balloons:

MacNamara: You been helping this guy spread anti-American propaganda?
Scarlett: It's not anti-American, it’s anti-Yankee. Where I come from, everybody’s against the Yankees.

Girl after my own heart.

Jimmy, we hardly knew ye
“One, Two, Three,” which was based on a 1929 play by Hungarian playwright Ferenc Molnar, did run into some bad luck. It began filming in East and West Berlin in June 1961, premiered five months later in December 1961, and between those two events the Berlin Wall went up. Oops. So not only was the movie already dated but audiences were less likely to laugh at shenanigans in a city that might, you know, cause World War III. It wound up losing money. Wilder bounced back with “Irma La Douce,” but then it was a downhill slog for him. Is there a hidden gem among his last seven movies? Asking not telling.

For Cagney, Buchholz’s unprofessionalism and Wilder’s perfectionism—one scene required 57 takes—made the whole thing such an unpleasant experience that it actually drove him from the profession. Near the end of filming, waiting for an interior setup, he walked out into the sunshine, recalled a photograph he’d just received of friends standing on the deck of the boat he’d lent them, and didn’t want to go back inside. And that was it. He decided to quit the movie industry right there. Save for a bit part in “Ragtime” in 1981, he did. 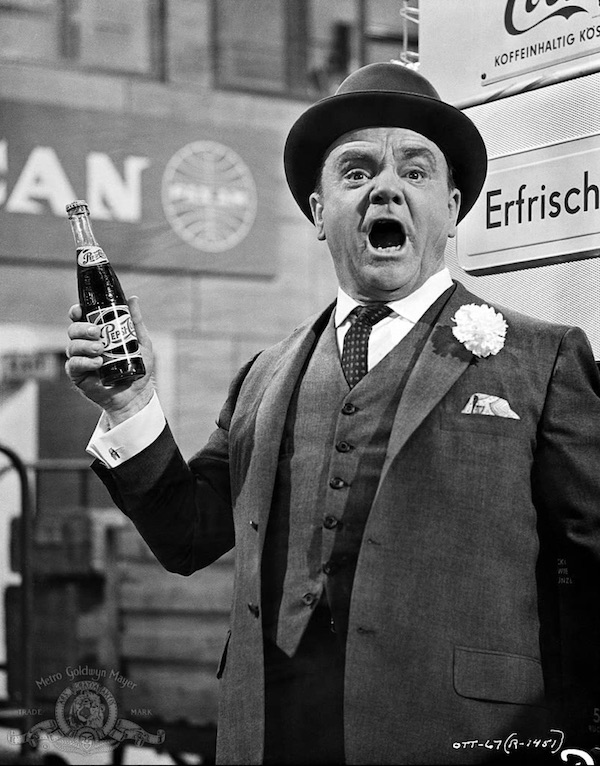 The final shot of Cagney's career, give or take.