If the title sounds familiar, it may be because it's the nickname of Robert De Niro’s character in “Goodfellas.” He was called that because of this.

How is this? Well, it’s the first time Cagney is directed by Michael Curtiz—who would subsequently direct him in both “Angels with Dirty Faces” and “Yankee Doodle Dandy”—but it’s basically another Warner Bros. quickie. It was made quick, the characters talk quick (Cagney wins), and its runtime is only 67 minutes long. Zip zip. People didn’t have time to waste during the Depression.

You also forget it quick. There’s not much there there. 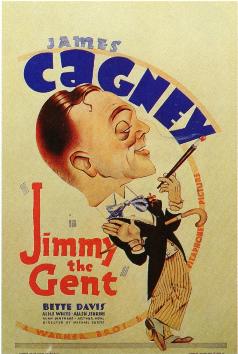 It feels like a play. There’s a lot of static action. Essentially “Jimmy the Gent” is a comedy in three gags.

In the first gag, we see how Jimmy—who finds or “manufactures” heirs of the recently deceased—operates. It’s rough and tumble, slapping faces, particularly of his hapless subordinate/foil Lou (Allen Jenkins), but Jimmy’s got a humorous glint in his eyes. The usual Cagney, in other words. Some of the adolescent mannerisms in his early films are gone, thank god, but he also gave himself an insane buzzcut to stick it to the bosses at Warners. His co-star, Bette Davis, apparently didn’t appreciate it, either.

In the second gag, Jimmy sees how his competition, Wallingham (Alan Dinehart), operates: high class, with high tea, and impeccable manners. Wallingham keeps tossing out French phrases. “C’est la guerre,” he says at one point, and, to Jimmy, “Au revoir.” “Filet mignon,” Jimmy responds. Hopelessly and—per the Warner Bros. ethos—righteously low class, Jimmy nonetheless tries to pretty himself up. He does this less for the business than for Joan (Davis), the girl he’s sweet on but who doesn’t like his charlatan ways. She used to work for Jimmy, and maybe date him, but now works for Wallingham. She sees him as a gentleman with ethics. So Jimmy tries to get ethics, too.

Well, he doesn’t try that hard. The third gag, which eats up most of the movie, is the big swindle. A woman who eats out of garbage cans dies, and, in the hospital, searching for her identity, it’s discovered that the inside of her coat is lined with treasury bonds, jewels, gold. She’s worth like $200k—about $3.6 million today. Was this a trope in the 1930s? The rich hobo? (I’m reminded of Kurt Vonnegut’s novel “Jailbird,” too.) Either way, the search commences to find/manufacture heirs. Wallingham gets his, so Jimmy searches for one that will trump Wallingham’s. He finds him: Marty Barton, a gambler, who’s now going by the name Joe Rector (Arthur Hohl). Except he’s wanted for murder. He won’t show his face to collect the inheritance. What’s Jimmy to do?

His scheme is incredibly complex, with a lot of moving parts, but it ain’t bad. The fun part is trying to keep up with it.

First he gets Joe to marry Lou’s girl, Mabel (Alice White, who’s great as a sweet, sexy, gum-chewing ditz). Then he bribes the nightclub singer that witnessed the murder, Gladys (Mayo Methot), to marry Joe as well. Now she’s his wife and can’t testify against him in court. She’s also been promised $100k when it’s over. Of course, once Joe gets off, Cagney welches. Plus she’s not Joe’s wife since he already married Mable. Except Mabel isn’t his wife either since she married him under a fictitious name. So all the men get off with the dough and all the women get squat. It’s up to Joan to deliver the rebuke. “You can go down deeper, stay under longer, and come up dirtier than any man I’ve ever known,” she tells him. She also delivers the movie’s tagline: She calls Jimmy “the biggest chiseler since Michelangelo.” Good line.

Bette Davis eyes
That leaves about 10 minutes. So, via another scheme, Jimmy gets Wallingham to reveal he’s just as big a chiseler as he is—worse, actually—and without the Cagney brio. Wallingham flees and Jimmy the Gent gets the girl.

Nah to any of that.