For all its battle scenes, for all its moments of light comedy, “Thor: The Dark World” begins abysmally. These are the first words we hear, spoken in voiceover by Anthony Hopkins in full Shakespearean:

Long before the birth of light, there was darkness.

Then we get a battle 5,000 years ago, with, on one side, Malekith and the Dark Elves (which should totally be a band name), and, on the other, the army of Asgard, led by Thor’s grandfather Bor. Yes: Bor. Takes a lot of balls to name a character that.

In this battle, Malekith plans to use “the Aether” to return the nine realms of the universe into darkness, but he’s defeated. But the Aether can’t be destroyed. So what to do? “Bury it deep,” one Asgardian, possibly Bor, says, “where no one will ever find it.”

It’s found. Guess by whom?

Vanaheim, Svartalfheim, London
I’ve never really been a fan of this stuff. Know that going in. Even when I was a teenager in the 1970s and collected Marvel Comics and worshipped at the feet of Stan Lee and Steve Englehart, I never collected “Thor” or “Dr. Strange” or any comic that was too otherworldly or cross-dimensional. Radioactive spider, sure. Gamma bomb and cosmic rays, of course. 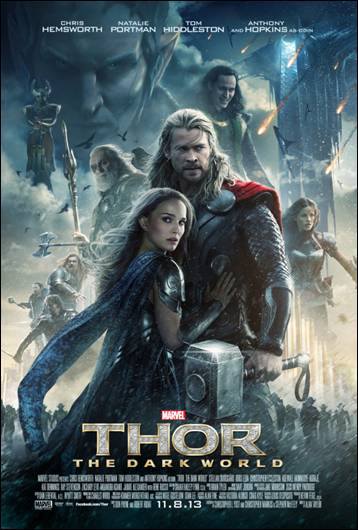 But Asgard? Verily, it maketh me stiff with boredom.

This is what I missed. There are apparently nine realms to the universe. Asgard is one, Midgard (us) is another. One of the funniest moments in the movie for me, unintentional, occurs early. Titles tell us which realm we’re in: Asgard, Vanaheim, Svartalfheim. Then: London.

So every 5,000 years there’s a convergence in which the nine realms are perfectly aligned, and where travel between realms becomes easier. It’s like wormholes open up or something. This is also the perfect time, if you’re so inclined, to return the universe to darkness. Which is the plan of the reawakened Malekith (Christopher Eccleston). In Biblical terms, he wants to go back to the time before the third verse of Genesis. He wants to return us to the moment before “Let there be light.”

It takes a while for the principles to figure this out. Thor (Chris Hemsworth) is too busy quelling disturbances in the nine realms, and Odin is too busy making grand pronouncements and being an ass. Seriously, is that guy ever right about anything? At one point he shouts, “The Dark Elves are dead!” When does he shout it? Right before the Dark Elves attack.

Odin, though, may be right about one thing. Early on, he counsels Thor against getting too involved with Jane Foster (Natalie Portman), since humans, at best, live 1/50 of the time Asgardians live. It’s an interesting point. Jane, for example, is upset that Thor has been gone for two years but for him it’s like two weeks. I’m curious how the romance is viewed on Asgard. How often are there interrealm romances? Are there laws against it? Is this a Loving v. Virginia thing? Or a King Edward VIII/Wallis Simpson moment? The movie’s perspective of the romance, though, is decidedly Midgardian: He’s hot, she’s hot, why not?

Thor only actually shows up then because Jane stumbles upon one of those inter-realm portals, pops through it, and, in some starry, rocky land that seems like a bad dream, finds, between two rocks, the Aether, which bonds with her body. That’s why Thor takes her to Asgard. And that’s why she’s in Asgard when the Dark Elves attack.

It’s very “Star Wars”-y, this attack, and even though I recognized it was done well I was bored. Plus I kept thinking: Wait, weren’t the Dark Elves in stasis all this time? So how did they develop the technology to take down Asgard? Did they always have it? Is Asgardian tech stagnating? Are they like Microsoft in this way?

One ship manages to get through Asgardian defenses, the one, coincidentally, carrying both Malekith and his chief warrior, Algrim/Kurse (Adewale Akinnuoye-Agbaje), who frees the many prisoners of Asgard, which leads to another rousing battle. Rah. Malekith, after bigger prey (Jane and the Aether), is stopped, and scarred, by Frigga (Rene Russo), Thor’s mom, who has powers of her own. Alas, not enough. She’s killed. And even with Asgard totally defenseless, even with the very fabric of reality hanging in the balance, Asgard takes the time for a good old-fashioned Viking funeral: boat, flaming arrow, waterfalls, pomp and circumstance.

Does Odin have a plan to deal with the Dark Elves? I forget. Thor has one, though, involving his friends, Sif, Fandral, Volstagg, Hogun and Heimdall, who are always underused in these movies, as well as his half-brother and chief nemesis Loki (Tom Hiddleston), who was a bit petulant in the first movie, became Hulk’s rag doll in “The Avengers,” and seems to be having a blast here. Thor’s plan is treasonous, requiring escape from Asgard. The big issue is trust: Can Loki be trusted? But that’s actually part of the plan. Thor, Loki and Jane make it into the dark realm for a faceoff with Malekith and Kurse, but Loki betrays him, cutting off Thor’s hammer-wielding right hand, rendering him powerless. Ah, but it’s a Lokian illusion! As Malekith is drawing the Aether from Jane’s levitating body, Thor cries, “Loki—now!” and retrieves his hammer and smashes the Aether into nothingness.

Except ... it then reassembles itself and enters Malekith, who becomes more powerful than ever, and just a step away now from returning the universe into darkness forever. So, yeah, bad plan, Thor.

Since “The Dark Knight,” which made a mint in 2008, the trend in superhero movies has been toward the dark, gloomy and tortured. “Thor 2” bucks the trend by going light and comedic. At times it’s almost camp. Its tone is reminiscent of the first “Superman” movie with Christopher Reeve. The hero, tall, handsome and strong, plays it straight, while almost everyone around him, even the chief villain (Luthor, Loki), makes with the jokes. It’s a shame the jokes aren’t better.

They’re not bad. It’s just all a bit broad. I love me some Kat Dennings, playing Darcy, Jane’s cynical, down-to-Earth friend, but she’s on a sitcom now, “2 Broke Girls,” and there’s a sitcomy feel to some of her lines and line readings. Hiddleston plays it better but even his lines aren’t particularly good. Hemsworth as Thor is better than ever—my friend Ward calls “Thor” as close to gay porn as mainstream movies get, and an early torso-washing scene bears this out—but they’re having him do silly stuff. He enters a London apartment and hangs Mjöllnir, his hammer, on the coat rack. It’s amusing for a second. Then you go, “Wouldn’t that bring the wall down? Or the apartment building?” Later, Thor is battling Malekith and gets clobbered into a tube station. The doors to the subway open and there stands a pretty blonde, agog. “How do you get to Greenwich?” he asks. “Takes this train three stops,” she answers. Which he does, while she flirts. Oops, didn’t mean to lean into your broad chest but the train just started, tee hee. All of this while the very fabric of reality hangs in the balance. Shouldn’t he have just called Mjöllnir and gotten on with it? Shouldn’t the writers?

A lot happens in “Thor: The Dark World.” Loki dies but no he doesn’t. Erik Selvig (Stellan Skarsgard) does the Walter White thing in his tightie-whities. (Or is that the Will Farrell thing?) The universe is saved but for how long? And where’s Odin at the end? Do we care?

I do appreciate the attempt, by director Alan Taylor (“Game of Thrones”), and screenwriters Christopher Yost, Christopher Markus and Stephen McFeely, to go light rather than dark with this material, despite the title. They give us some great CGI battle sequences—particularly between Thor and Kurse, and Thor and Malekith. They try to have fun. But in the end the fun bits rarely feel organic to Thor’s story, just to ours, watching. In the end, it still ain’t Joss Whedon.