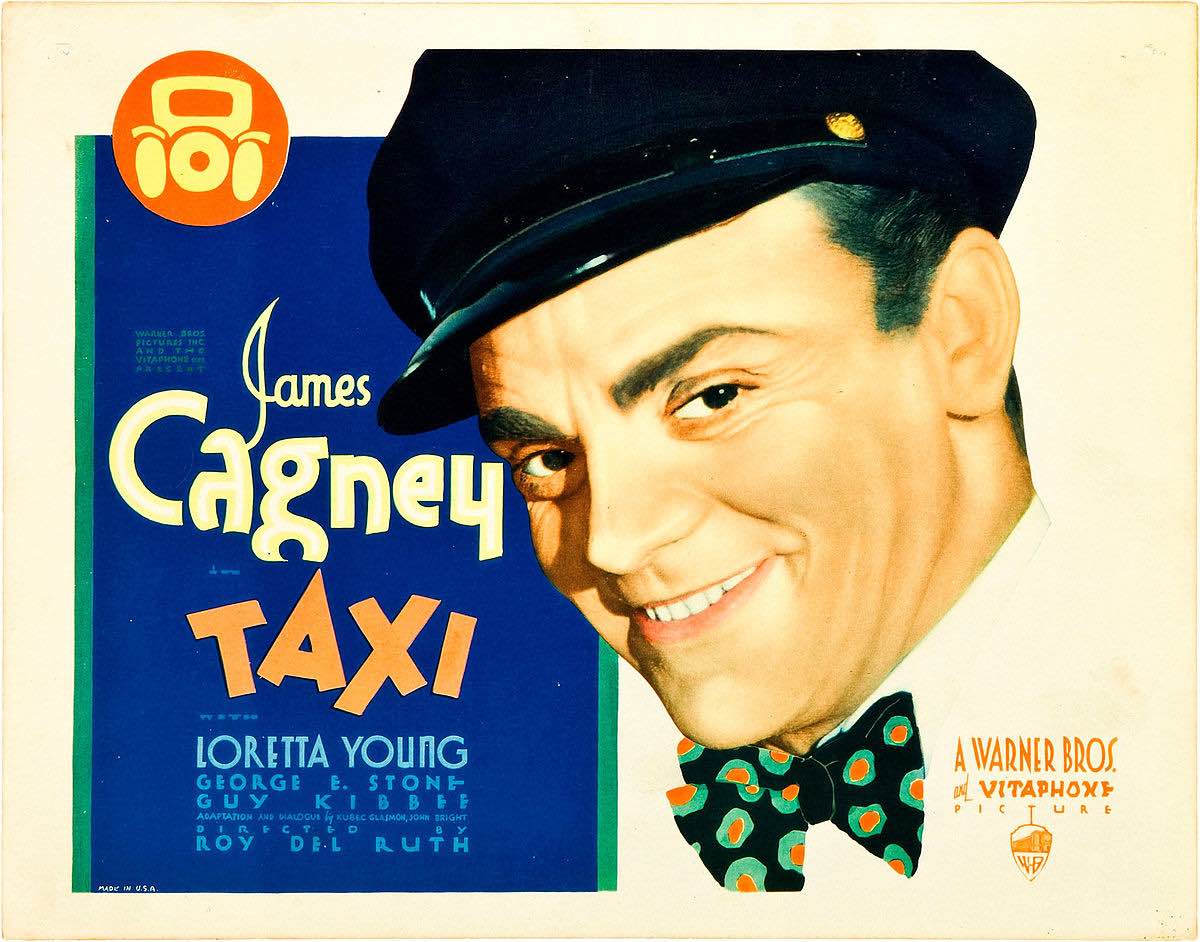 It begins great. No fanfare, just right to it. We got a shot of New York City in the early 1930s with an absolutely gorgeous Loews Theater in the background. Then we get the stars’ names:

It’s so New York. A Jewish man is trying to explain his dilemma in Yiddish to an Irish cop. Something about kinder and Ellis Island. I assume meeting kids at Ellis Island? The cop’s not understanding, scratching his head, so Matt Dolan (Cagney), a cabbie who’s been listening amused to the whole back-and-forth, speaks to the Jewish man in Yiddish. (Apparently Cagney was fluent.) Guy gets into the cab while the cop eyes Cagney’s driver’s license on the dashboard:

Cop: [Sarcastic] Nolan? What part of Ireland did your folks come from?
Nolan: [Yiddish accent] Delancey Street, denk you.

Then the plot. We’ve already seen a cab company, Consolidated, muscling out other independent and freelance cabbies. They try to do the same to Nolan, boxing him in so he can’t take the guy to Ellis Island. So he gets out of his cab, and with that dancer’s lightness Cagney always had, punches one mug, then the other. The Yiddish man cheers him on.

Temper temper
We think that’s the story: Cagney and the other indies vs. Consolidated. Indeed, one of the indies, nice guy Pop Riley (Guy Kibbee), who’s been servicing the same neighborhood for years, is threatened by Consolidated’s leader, Buck Gerard (David Landau). Pop is obviously frightened but stands his ground. Then one of Landau’s men (Nat Pendleton, who played Goliath the strong man in the Marx Bros.’ “At the Circus”), rams his truck into Pop’s cab, totaling it. In a scuffle, Pop shoots him dead. The judge is lenient, given the circumstance, but Pop still gets 10 years. He serves hardly any of it. He kills himself.

Since his daughter, Sue Riley, is played by the film’s other star, Loretta Young, we figure, “Yes, that’s the story: these two battle the Consolidated bad guys and win the day for the independents.” Hell, IMDb still thinks that’s the story:

But that’s not the story.

Dolan is giving a fiery speech to other indies when he has Sue step up to speak in Pop’s stead. And she ... counsels peace. She says enough blood has been shed. She says work out a deal with Consolidated.

And they do! Fifteen minutes into the picture, we get this headline: 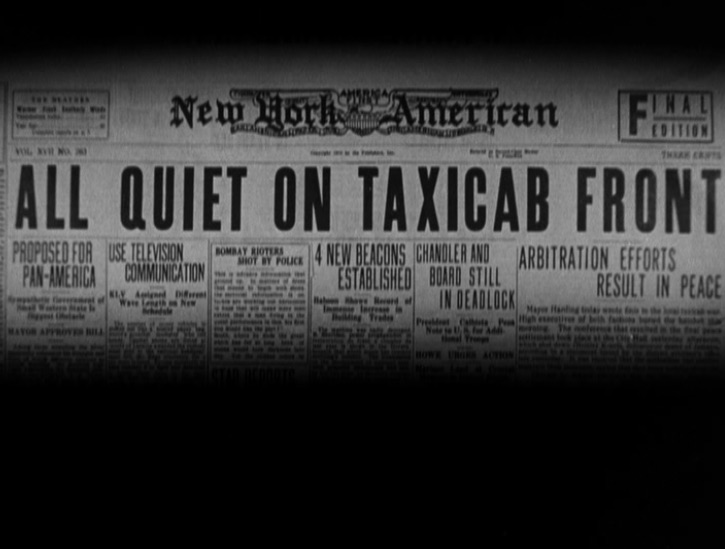 Dolan isn’t having any of it. “Yeah?” he says to his fellow cabbies. “How long is that peace gonna last? Six months. And then they start getting tough again. ... We shoulda done the job right in the first place—drove their cabs right into the East River.”

Except he’s wrong: The peace lasts the entire movie. The cabbie war is never brought up again.

So if the movie isn’t about independent cabbies fighting against a corrupt behemoth, what’s it about?

It’s about how Cagney needs to control his temper. I’m not kidding.

Dolan is totally pissed at Sue for brokering the peace. The next night, when he meets her outside her stoop and they squabble, he says, “I’ll knock the ears off ya.” Instead, she slaps him, runs inside, while he tells his friends, “I wouldn’t go out with that dame if she was the last woman on earth—and I just got out of the Navy.”

But in the very next scene, with no real exposition on what changed, they’re cozy and on a double date with his friend Skeets (George E. Stone) and her friend Ruby (Leila Bennett—the Julie Kavner of the 1930s). There’s a rocky courtship, then they get engaged, then married, and on their wedding night, at “The Cotton Pickers Club” in Harlem, they—and Skeets and Ruby—run into Buck Gerard. He’s drunk. His girl, Marie (Dorothy Burgess), talks Sue into getting Dolan out of the joint before things go south. Sue agrees. But things go south. Gerard makes a sloppy drunken comment about Sue, Dolan decks him, and Gerard comes at him with a knife ... just as Matt’s brother, Danny (Ray Cooke), comes between them. He dies.

And Sue still counsels peace. She actually helps Gerard. He’s on the lam, Marie asks for dough to get him out of the area, and Sue gives it to her. And it’s the money Matt had saved for Danny’s tombstone! Wow.

Matt finds out anyway, there’s a mad rush to Jersey where Gerard is holed up, and Cagney nearly utters the line that every impressionist/comedian/kid used for the next 50 years to do their Cagney:

Come out and take it, you dirty yella-bellied rat, or I’ll give it to ya through the door!

But the cops arrive and Sue gives up ... Matt. Her husband. Wow again. Except Matt still plugs the closet door. By then, though, Gerard had scrambled out the window and fell to his death. That's that. And in the final minutes of this 66-minute movie, Matt and Sue make up. They don’t change but they’re back together. World without end.

One of these days, Alice
Anyway, I loved all this stuff. I loved the meandering nature of the film. I loved that Donald Cook, Cagney’s co-star in “Public Enemy,” is the star of the fictional film they see on their double date, and that Dolan dismisses him with the movie studio comment, “His ears are too big.” I loved the George Raft cameo (Cagney got him the part because he could dance; he'd just arrived in Hollywood) and the Lil Dagover reference (I had to look her up).

I loved the pre-code naughtiness: Loretta Young stripping down to her slip to change into her waitress costume, while Leila Bennett drones on in front of an ALL EMPLOYEES MUST WASH THEIR HANDS sign—meaning those things have been around for at least 90 years. I loved Skeets watching Sue run up the steps of her stoop and saying, almost with a Groucho cadence, “Anyway, she’s got a nice pair of pins.”

Bennett has some of the movie’s best lines:

Watching, I began thinking about the difference between Warner’s big stars of the ’30s and ‘40s: Cagney and Bogie.

Directed by Roy Del Ruth, from “The Blind Spot,” a play by Kenyon Nicholson, “Taxi” is raw. They still don’t have this stuff down—they’re just throwing things up and seeing what sticks. I think that’s why I like it so much. It’s Hollywood, and the movies, becoming.