The Monster in the Middle: A Few Thoughts on Unfriending Facebook 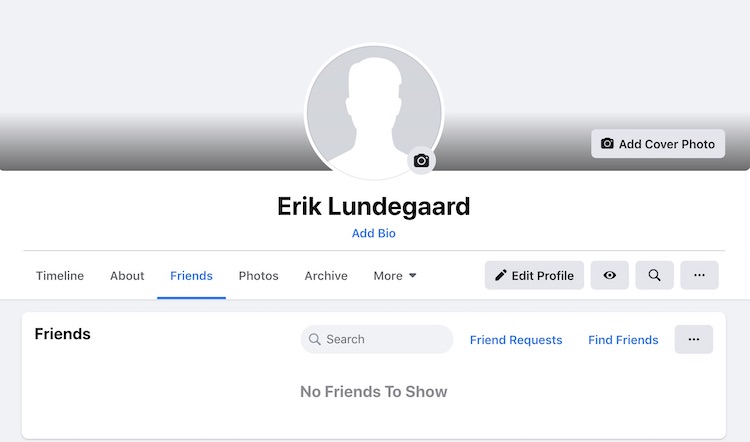 Donald Trump is actually the main reason I left Facebook. In the wake of news that Facebook helped turn the 2016 election in Trump’s favor, I assumed that Mark Zuckerberg and company would act as responsible corporate citizens—like Tylenol did after the 1982 poison-murders, or Jack in the Box after the 1993 E.coli outbreak. I assumed Facebook would be the place where ads were vetted and bullshit exiled. Nope. The opposite. To Facebook, political ads full of lies aren’t bugs, they’re features.

To be honest, I should have bolted after the Data Analytica scandal broke in March 2018, the way my wife did. One minute she was there, the next she was gone, a ghostly blank avatar on my Friends page. That kind of freaked me out a little. She was gone … but still here? Seemed wrong. And dangerous? Some part of me—the part that doesn’t know anything about tech—thinks it’s easier for hackers to take over such accounts, since they’re just sitting there. So I decided when I left Facebook I wouldn’t leave any ghostly blank avatars behind. I’d get rid of it all.

Quaint/not quaint
I’d been unfriending for a while anyway. If Facebook reminded me it was So-and-So’s birthday, and if I had trouble placing them—someone I met at a dinner party once?—I’d just unfriend them. It was kind of fun. Last fall, when the Facebook news got worse, I sped up the process. I became proactive. I’d go to my Friends page and be merciless. Who are you again? Bye. I also began to see more blank avatars there. Were others bolting, too? I got down to 200 friends, then 100, then 50. I have to admit my Facebook feed became more interesting. It was people I cared about.

Soon I began to get rid of the photos I'd accumulated as well. I archived the ones I wanted and deleted the rest. It bugged me that I even had to delete Events—things I went to, or didn’t go to, two, four, or seven years ago: Vinny’s 50th, Erika’s 50th; a Prince Memorial I couldn’t attend; Silent Movie Mondays no one would attend with me. Why didn’t these go away once the Event was over?

Then I went whole hog: I deleted every scrap of “About” info: where I worked, went to school, my family relationships, my life events. I got rid of Videos, Check-Ins, Sports, Movies. There was so much of it. And yes, I assume deleting something on Facebook doesn’t mean it’s deleted for Facebook; I assume they keep that data somewhere. Deleting, in fact, is just another form of data for them. But it still felt good. I wanted to cut ties. I wanted to leave a blank fucking slate.

Finally, I went after 11 years worth of posts. That took a while. Not just because it was 11 years worth but because I kept rewatching stuff: clips of John Mulaney in 2018, or Lin-Manuel Miranda from 2016, or Jon Stewart in 2015. (God, I miss Jon Stewart.) I saw a genius clip of Scott Thompson’s Buddy Cole character on “The Colbert Report” helping the 2014 U.S. Men’s speed-skating team appear less gay for the homophobic Russian Olympics. I watched my nephew Jordan, last spring, singing “Corner of the Sky” from his senior-year high school musical “Pippin.” He was 7 when I joined Facebook, his brother Ryan 5. Now they’re nearly 19 and 17. Their whole lives were on the feed I was deleting.

Many posts were already dated. A 2017 news item said Kevin Spacey would be playing Gore Vidal in a Netflix biopic and I wrote: “I’m there!” I suggested Louis C.K. as the next Oscar host and everyone was like: “Love him!” I kept quoting Garrison Keillor. I kept writing: “Franken 2020!”

I came across a jaunty invitation from a wife throwing a surprise birthday party for her husband. Within a year of that past, that event, they would divorce acrimoniously. I had trouble unfriending from my friend Jessica’s memorial page; it felt like severing a connection forever. I couldn't delete my mother’s 2019 obituary, with nearly 200 comments from family and friends; it stayed at the top of my feed, the first post I came across in my backwards march through time; the lump in my throat.

Some of it was quaint. Oh right, flash mobs. Oh god, word clouds. There were “Mad Men”-yourself memes, Benedict Cumberbatch name generators, and Alex Pareene’s “Hack List.” (God, I miss the hack list.) Here's when everyone was doing the “You’re in a horror movie” meme, and the “You’re a serial killer” meme. Name your top 15 albums and pass it on! So much crap we did. All they had to do was ask.

Some of it wasn't quaint at all. Oh right, Cliven Bundy. Oh right, the “Ground Zero mosque.” Ted Cruz and “Green Eggs and Ham,” and Joe Wilson and “You lie!” Here’s when the GOP thought Scott Walker was the next big thing. Here’s when the GOP thought Bobby Jindal was the next big thing. In 2009, Henry Louis Gates, an African-American Harvard professor, was arrested in his own home, and Obama commented on it matter-of-factly during a press conference, and Obama had to apologize. There was even a beer summit with the arresting officer at the White House. That’s how stupid we were. That’s how stupid we’ve always been.

But the toughest part of my scorched-earth backwards march wasn’t any of this; it was the monster in the middle.

The monster in the middle
He started out as a joke. In 2010, after I posted Alex Pareene’s article “A patriot’s guide to still hating Obama for killing Osama,” my father commented: “Donald Trump is already asking to see the death certificate.” I posted a 2012 Onion article in which Donald Trump owns up to what a “sad, pathetic human being” he is. That was in 2012. We had no idea.

I kept getting him wrong. I thought the McCain quote would end his candidacy. Didn't. I thought Megyn Kelly handled him in that first GOP debate. She did, but he won the war. He talked about the the blood coming out of her eyes, and her wherever, and then refused to apologize for it. And that became the story. I'm not smart about a lot of things but I could see what he was doing. I posted:

He was all over my 2016 feed. Lin-Manuel Miranda’s paean to immigration was forever competing with Trump’s xenophobia. It felt like a battle for the soul of America. I kept warning friends. I posted a link to Jane Mayer’s article about Trump’s ghostwriter Tony Schwartz, who called Trump a sociopath. I quoted Dan Savage: “If Donald Trump becomes president, the people who will suffer are not going to be pasty white Jill Stein and her pasty white supporters.” I quoted Andrew Sullivan railing against the GOP for saying nothing when Trump asked a foreign government “to use the fruits of its espionage to help defeat his opponent.” That one turned out to be evergreen.

Others weren't worried. “The country has a lot of numb-nuts,” a friend wrote, “but not enough to elect Trump.” I wanted him to be right.

According to 538.com, Hillary’s chances have gone down more than 20% in the last week—from 85% to 64%, with many of the swing states now swinging the other way. This is a direct result of FBI director James Comey’s unprecedented meddling, which somehow he’s gotten away with, just as Trump has gotten away with not disclosing his taxes, being caught on camera bragging about groping women, chastising a Gold Star family, etc., etc. He’s a disgusting, incompetent, race-baiting man who never did anything for anyone but himself. He may be, as his ghost writer called him, a sociopath.

So today I donated to Hillary’s campaign again, and I’ll be part of the get out the vote campaign this weekend. I’d recommend anyone who can, do the same.

This was my status update four days later:

Brave new world
At the beginning, there had been a real sense of excitement about Facebook. Hey, it’s you! How fun to see you in here! Also a sense of confusion. “What the hell is this site supposed to do for me?”  a former boss, 20 years older, posted on my wall in 2009. “I keep getting these e-mails telling me to join because So-and-So wants to be my friend. Some guy I don’t even know, and who doesn’t even know me, says he wants to be my friend. Why would he do that? And why would I want to even respond? Help bring me into the Brave New World of Social Networking.”

I thought I knew. I assured him Facebook was like any new communication platform: great for keeping up with friends and family. It had the added attraction of giving us the degrees of separation between friends. I'd come across a woman who was friends with two of my friends, even though the two friends lived in different parts of the country and didn't know each other. So how did she know both of them? Turns out she grew up next to one in New Jersey and now shared an office with the other’s wife in Chicago. “That was fun, finding that out,” I wrote to my ex-boss. “The unseen connections between friends. You’ll probably get a lot of it.”

I doubt he did; he's smart and fled quickly. I certainly didn’t. The above was a one-off. Facebook was a small world and it stayed small. It was supposed to bring us together but it drove us apart. It’s still driving us apart.

I debated how to end it. Leave just my mom’s obit? Add a screenshot of the “U Dick” note from “The Social Network” for Zuckerberg? In the end, after reading the comments to my mother’s obituary one last time, I just got rid of it all.