This is one of the weaker of the mid-30s Cagney movies. It’s an ensemble piece about an Irish mother (Mary Gordon) and her three grown-up boys, all of whom live with her in a fairly spacious tenement apartment on—I imagine—the lower east side. It’s like an Irish version of Gertrude Berg’s radio series “The Goldbergs.” It even begins in the same fashion: calls across the tenement courtyard; sharing butter with neighbors. 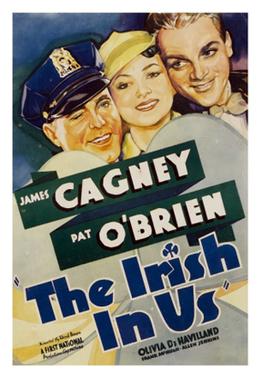 For the first half, one of the boys, Pat (Pat O’Brien), a cop, is courting the captain’s daughter, Lucille (Olivia de Havilland, making her film debut). Meanwhile, the ne’er-do-well but happy-go-lucky youngest, Danny (James Cagney), is involved in another get-rich-quick scheme: He becomes boxing manager to Carban Hammerschlog (perpetual Cagney foil Allen Jenkins), who, whenever he hears a bell, slugs the nearest person. Antics ensue.

The third brother, Mike (Frank McHugh), a fireman, has a wry sense of humor and a fondness for gin. Danny steals Pat’s suit for Carban—I forget why—so Pat doesn’t have it the first time Lucille comes over to meet the family. Antics.

None of it is particularly funny.

For a time, I thought, “Well, it’s nice that Pat O’Brien gets the girl and Cagney doesn’t get into a fight.” Yeah, no. Lucille falls for Danny, causing rifts with Pat; and then Carban gets drunk before his big fight with the middleweight champ so Danny has to climb into the ring in his stead. He wins the fight and gets the girl.

So much for ensemble. Not with a star.

One of 130 movies directed by Lloyd Bacon (none particularly famous) and one of 68 writing credits for Earl Baldwin (ditto). In his autobiography, Cagney only mentions the film in passing, as yet another of the “cuff operas” to which actors and director would ad-lib, trying to improve the script.