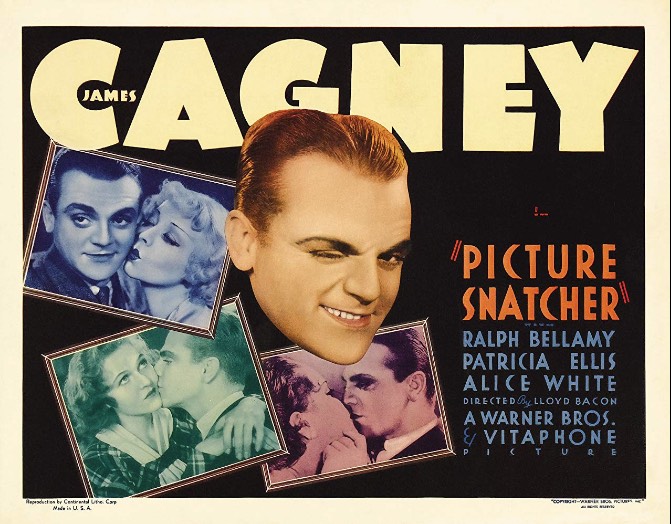 “Picture Snatcher” is less about the rise of a photographer than the kind of rise of a kind of photographer. Here’s what we see him do:

If they made the movie today, he’d have to have a real eye for photography. A photo editor would tell him that. They’d give him a second glance, surprised by all his talent. The photos would matter. Here? They’re just selling tabloids, honey. It’s the Warner Bros. motto personified: talent schmalent, give me gumption. It’s all about Depression-era survival.

But it’s not a good movie.

16 going on 17
James Cagney plays Danny, who, as the movie opens, is getting out of Sing Sing after three years. His gang picks him up, but he soon tells them he’s out. He’ll take the dough for taking the fall but he’s going legit. He says something about never wanting to return to prison but the real explanation is behind the scenes. Cagney became a star playing a gangster in “Public Enemy,” but there was a corresponding outcry about glamorizing gangsters, and the Production Code began to grow teeth. So Warners searched for other jobs for Cagney: boxer; taxi driver; G-Man. Here, tabloid photog.

Some of the resolutions are dicey if you think about them for two seconds:

Father of the year.

Not sure why the filmmakers (director Lloyd Bacon, five screenwriters) were so quick to resolve things since it simply forces them to create yet another complication. How can Danny get a photo of the Sing Sing electrocution? How can Danny get said photo to Graphic News before the cops catch him? How can Danny fend off the amorous advances of “sob sister” Allison (Alice White), who’s Mac’s girl?

It’s not just Allison, either; all the women in the film throw themselves at Cagney. I like him but he’s hardly Gary Cooper. It’s as if Hollywood folks have already forgotten what it’s like to be a man in the real world.

That said, I could totally see a revisionist take focusing on Allison. She’s called a “sob sister”—a female reporter who uses too much sentimentality—but she’s probably the best writer on staff. After the Sing Sing scoop, Danny relays her the story in his usual patter (“and in walks the two screws...”) and it’s Allison who turns it into readable prose. Afterwards:

It’s played for laughs but there’s a social undercurrent there. I mean, why is the movie dismissive of Allison? Because she uses sex to get what she wants—even if what she wants is sex—and because she’s pushy. She’s pushy enough that Cagney has to slug her. That’s actually why she’s pushy: to justify the violence. Smashing a grapefruit in Mae Clark’s face in “Public Enemy” caused such a sensation that Cagney had to repeat variations of it in subsequent movies—“I now had a reputation as a woman slugger,” he writes, somewhat helplessly, in his 1976 autobiography, “Cagney By Cagney.” Here, it’s Alice White’s turn.

White, by the way, was supposed to be Warner’s answer to Clara Bowe—she has a bubbly, humorous presence—but scandal sidelined her career in ’33 and she was more or less done in pictures by 1940. Ditto Patricia Ellis, whose last picture was released in 1939. The men kept acting. Cagney was brought out for “Ragtime” in 1981, while Bellamy’s last picture, “Pretty Woman” in 1990, was released more than 50 years after Ellis’. If her IMDb birthdate can be believed, she was only 23 at the time of her retirement. Wait, which means she was only 17 when playing Cagney’s love interest in “Picture Snatcher”? Scratch that: She turned 17 two weeks after the film was released. She’s 16. To Cagney’s 33.

Wow. So to sum up: Cagney wins the hand of a 16-year-old girl because her father is bought off with a puff piece; and two men are promoted over a better female writer who in the end literally gets socked in the face.

Women were put on such pedestals in those days.

15 days, 77 minutes
Is it contractual that Cagney go down-and-out (drunk, 5 o’clock shadow) before every third act? I see it a lot. Here, the Sing Sing photo leads to Nolan’s demotion—since he let Danny into the prison—so he loses Patricia. Then Mac finds Allison making a pass at Danny, assumes it’s the other way around, and slugs him. So Danny loses Mac, too. Thus the bender. But Mac finds Danny and lets him know:

He explains all this in about five seconds.

“Picture Snatcher” has snap but that’s it. It took only 15 days to make and ran 77 minutes long. It was one of five movies Cagney starred in that year, one of five pictures Lloyd Bacon directed that year, and one of 12 movies Bellamy appeared in that year. Wasn’t just Danny; everyone was scrambling back then.