Early on, Godzilla attacks the Apex Corporation and CNN turns on him, intoning, “The massive titan, once thought to be a hero to humanity, made landfall in Pensacola, Florida...” First, that “made landfall” thing is just dumb. More, it’s the quick narrative turnabout. It’s reminiscent of an idiot moment in the first Godzilla film, when shortly after Godzilla’s war with the MUTOs we see this news chyron: “King of the Monsters: Savoir of Our City?” Right. A giant, fire-breathing lizard shows up out of nowhere and they’re already promoting a good-guy narrative. And now the opposite. If I felt all of this was a critique of the news media and its WWE-esque face/heel tendencies, I might dig it; but I think it’s just lazy filmmaking.

Anyway, that’s not the unrealistic thing I’m talking about. 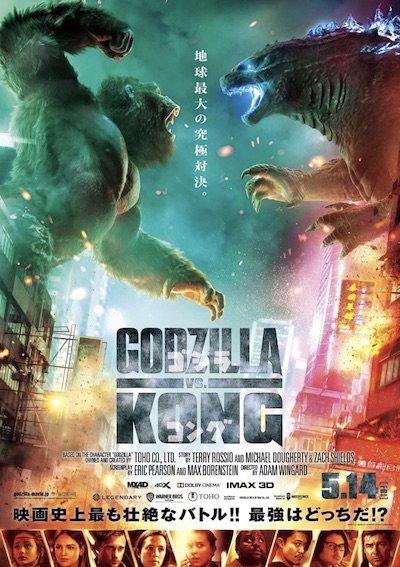 One person not buying into CNN’s demonization of Godzilla is paranoid podcaster Bernie Hayes (Brian Tyree Henry of “Atlanta”), who has a low-level job within Apex in order to expose it. His most avid listener is Madison Russell (Millie Bobby Brown), the kid hero from the second film, who argues thus with her uptight dad (Kyle Chandler):

Dad: Right now Godzilla’s out there and he’s hurting people, and we don’t know why. …
Kid: Godzilla attacks when provoked—that’s the pattern. Pensacola is the only coastal Apex hub with an advanced robotics lab—that’s the variable. And you add it up and your answer is that Apex is at the heart of the problem.

Dad spent that second movie 1) seething and 2) getting everything wrong, and it’s pretty much the same here. On the plus side, he’s barely in this one. But no, this isn’t the unrealistic thing I’m talking about, either.

Eventually, Madison and her comic-relief, Kiwi friend Josh (Julian Dennison of “Hunt for the Wilderpeople”) hook up with Bernie and together they all decide to break into Apex. How do they do it?

They just walk in.

Apex is in ruins, but nothing’s been cordoned off—not by the cops, the FBI, the NSA, the EPA or Apex’s own security patrol. The kids just wander through the rubble. Then they take an elevator to Sublevel 33 where Bernie knows some top-secret shit is going on. And it is! They’re in a room with incubated skull crawlers … except it’s not a room, it’s a ship, and they’re locked in (by accident) and then transported (by tunnel?) to Hong Kong. There, they wander out into a vast warehouse-like area where the evil CEO, Walter Simmons (Demian Bichir), bourbon in hand, watches the beta-testing of his MechaGodzilla from the control room. The kids are actually in the test area when a skull crawler is released and comes within feet of killing them before Mecha pulls it away and tears it in half. And though one assumes tons of eyes and/or censors are on this beta test, not one person says, “Hey, are those kids supposed to be down there?” The idiocy is overwhelming. It’s like the kids are invisible. They’re even able to wander away from the test area, where, in another room, they discover the evil CEO’s evil right-hand man, Ren (Shun Oguri), sitting inside one of the skulls of Monster Zero and controlling MechaGodzilla via whatever AI tech they’re using. They immediately and correctly surmise that Monster Zero’s DNA was used to create MechaGodzilla as a means of battling real Godzilla. And it’s only after all this, after Madison pops her head into, I believe, the CEO’s control room, and Bernie follows, that a female exec finally sees them and goes, “Huh, meddling kids. Guess we better call the guards.”

I'll take a giant lizard. But this bullshit? Just stop.

You know what the worst part is? We don’t need these kids in the movie at all. They’re absolutely irrelevant to moving the plot forward.

Hollow Earth
Wait, who do we need in this movie?

Our male lead is Nathan Lind (Alexander Skarsgĺrd), a professor whose discredited book, “Hollow Earth,” argues that the center of the earth isn’t “a moon-size ball of iron floating within an ocean of molten metal,” per National Geographic, but a Jurassic Park-like wonderland crackling with energy. It’s where the titans come from. It’s where Kong’s Skull Island comes from. That’s his theory. And the only one who believes him is the evil CEO, who wants that crackling energy source to power MechaGodzilla. So he contracts Prof. Lind to find an entryway to that world.

At first glance, then, Lind seems necessary. Except the Antarctic entryway has already been excavated. And once both men latch onto the idea of a titan guide—i.e., Kong— to get them the rest of the way, well, what use is Lind? None. At the 11th hour, sure, he’s the one who suggests using those dual-gravitational whizzy things (HEAVs) to jumpstart Kong’s heart but that could’ve been anybody. Our male lead isn’t necessary at all.

Our female lead is even worse. Ilene Andrews (Rebecca Hall) runs the Kong Containment facility on Skull Island, and she’s called the “Kong Whisperer” in science magazine cover features, so she seems necessary. Nope. She doesn’t even know that the deaf girl in her charge, Jia (Kaylee Hottle), the last of the Iwi tribe that once populated Skull Island, has taught Kong sign language. That’s right, Kong can speak! This revelation, as Kong is taken in chains on an aircraft carrier to the Antarctic entryway, is a good scene—one of the few in the movie—but it does point out how useless Ilene is. It’s all Jia.

So Jia we need. And the villains who set everything in motion. And our titans. And that’s about it. But the movie keeps piling on useless characters. We get one scene of expository dialogue between Ilene and a guy, Ben (Chris Chalk of HBO’s “Perry Mason”), and that’s it for Ben. Lance Riddick from “The Wire” has a scene. Forget what. Hakeem Kae-Kazim, ditto. All these nothing roles feature Black actors. Make of it what you will.

Anyway, that’s the gist. Apex Corp. is creating a mechanized Godzilla to attack the real Godzilla so humans can become the apex species again. That’s why Godzilla attacks Pensacola. And Godzilla and Kong have an old, ancient rivalry, which is why Kong is being contained—so GZ doesn’t sense he’s there. But when he’s moved, GZ attacks. God, that’s another dumb idea, isn’t it? They need Kong as guide, but let’s make sure this battle happens where Kong will be at a distinct disadvantage: in the middle of the ocean.

Accompanying Lind, Ilene and Jia on their journey to the center of the earth is the evil CEO’s bitchy, superhot daughter, Maya (Eiza Gonzalez, call me), who comes off like a Mexican Ivanka Trump. Her job is to make sure they get that crackling energy source for Mecha. Love Dad sending daughter on this super-dangerous mission. Did she insist? Is it the bourbon? Is he sick of her, too? After the giant bats attack in the cave, she’s about to escape in the HEAV when Kong grabs it, sniffs it, crushes it. Bye, Mexican Ivanka.

Daddy gets it, too. The Hollow Earth energy source not only powers MechaGodzilla but gives it sentience. So evil right-hand man’s brain gets fried within the skull, while evil CEO is fried by Mecha’s fire breath. Hope Apex Corp. has a good succession plan.

The final big battle takes place in Hong Kong—for the Chinese box office. Godzilla defeats Kong, is losing to Mecha, Kong is revived and the two team up to defeat the AI gone awry. Then they roar at each other and each retreats to its domain: Godzilla beneath the sea, Kong on his throne in Hollow Earth.

Regular idiocy
I’ll give it this: “Godzilla vs. Kong” is better than the two previous Godzilla movies as well as that other hugely anticipated fantasy matchup: “Batman v. Superman.” OK, low bar: “Godzilla: King of the Monsters” was my worst movie of 2019 and “BvS” was my worst movie of 2016. This one, at least, has moments. And while they continue to make Godzilla a tubby waddler, whose face is hard to see amid the scales, the CGI Kong is pretty amazing.

The studio publicity machine is playing up the Team Godzilla/Team Kong angle, and most people are playing along. Here’s my take. Fair fight, Godzilla kicks ass: tougher skin, fire breath. Plus Godzilla can sense almost anything happening anywhere in the world (Pensacola, Hong Kong), while Kong, that dumb ape, can stand right at the portal to the prehistoric Hollow Earth where he once ruled and have no inkling. He’s got to be told. But I root for Kong. He’s both underdog and us. He’s got a face. In a cinematic sense, the only thing better about Godzilla is his theme music.

One more complaint before I’m out of here. It’s when the three kids—or the two kids and Bernie—first meet. They’re sitting in a cafeteria and have this conversation:

Bernie: Before we go any farther, I got one question: Tap or no tap?
Madison: No tap.
Josh: Excuse me, what is tap?
Bernie: Water. They put fluoride in it. Learned it from the Nazis.
Madison: Theory is it makes you docile, easy to manipulate.
Josh: Oh. I drink tap water.
Bernie: Yeah, I kinda figured that.

In a world in which dipshit conspiracy theories are coming close to overthrowing American democracy, why engage in this kind of idiocy, Hollywood? C’mon. Just stick to your regular idiocy. That’s what you’re good at.