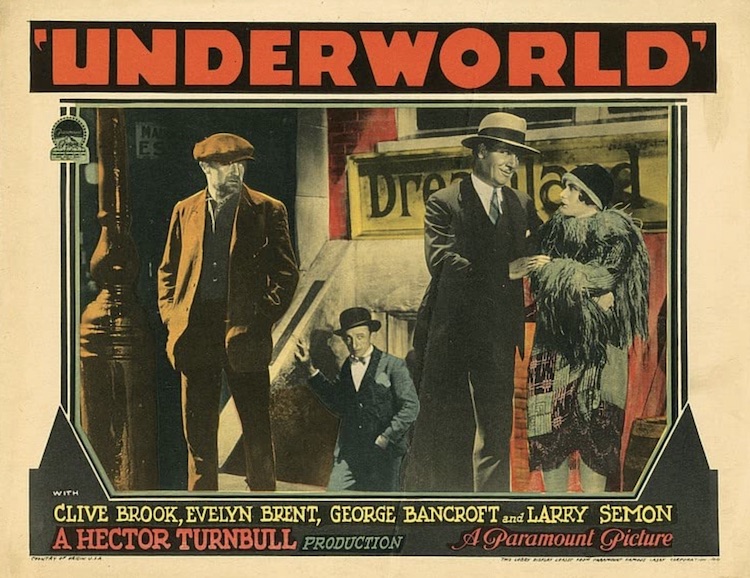 Brook looking Jean Gabin-ish, Semon in the staircase, Bancroft and Brent. They're about to see that the city is theirs.

“Underworld” is one of the first films directed by Josef von Sternberg as well as one of the first great gangster pictures. It’s the first credit for legendary screenwriter Ben Hecht as well as the first film to win an Academy Award for best original story. Both films vying for the award that year—this and “The Last Command”—were directed by Sternberg, who received zero nominations, and got bupkis from the Academy for his career.

All of which gets into the tricky Hollywood problem of credit. In his book, “Who the Devil Made It,” Peter Bogdanovich recounts a university screening of “Underworld” and “The Last Command,” with Sternberg present, and the man wasn’t exactly quiet on the topic:

During the credits of both movies he called out that several people listed on the screen—especially the writers—had nothing whatever to do with the film; their names were there only because the studio paid them regularly and had to put their names somewhere.

Let’s get into the gangster stuff.

In the real world, “Underworld” prefigured the difficulties gangster flicks would run into with censors. The British Board of Film Censors rejected the movie twice until extensive cuts were made to limit the lead character’s likeability and the film was retitled to something more properly scolding: “Paying the Penalty.” Overall, “Underworld” prefigures all gangster movies by portraying gangsterism as a world unto itself, where the real trouble is less the law than rival gangsters.

It opens with a literal (albeit silent) bang. As a drunk is weaving along in the night, an explosion goes off at a nearby bank and a second later “Bull” Weed emerges with the dough. Since the drunk recognizes him, Weed knocks him out and takes him along. I like the way, back at the hideout, almost in one swift movement, Bancroft is able to toss the man onto a bed while kicking the door closed with his foot. That’s some big-man grace. Even better is this exchange, after Bull realizes the man is an alcoholic and knocks the booze out of his hands:

Bull: That’s what makes bums and squealers!
Man [standing shakily but with dignity]: I may be a bum but I am no squealer. I might say, sir, that I am a Rolls Royce for silence.

So Bull not only gets him a job at the Dreamland Café but a nickname: Rolls Royce. He’s played by Clive Brook, who’s got a bit of a Jean Gabin thing going, particularly when he’s down and out, with a cig clenched in his mouth.

The oddity of Bull is he has no crew: just a moll, Feathers (Evelyn Brent), and an associate, Slippy Lewis (silent comedian Larry Semon), who’s more comic relief than tough guy. At Dreamland, he spins his hat in the air like a frisbee and it returns to him like a boomerang; then he puts 5˘ into a kind of vending machine that dispenses flower water for his handkerchief. (Did anyone else know these things existed?) Meanwhile, across the café, rival tough guy “Buck” Mulligan, neither stately nor plump, has about five guys hanging on his every word. Unlike Bull, he’s a nasty, cramped man who sees slights everywhere. Feathers doesn’t acknowledge him so he tries to impress her by humiliating Rolls Royce. He tosses a $10 bill into a filthy spittoon and says go fetch. When Rolls retains his dignity, Buck knocks him down. When Bull intervenes, their rivalry begins.

That basically sets up the rest of our movie. As Bull and Buck try to outmaneuver each other, a cleaned-up Rolls and Feathers fall for each other; but neither wants to betray Bull, the man who rescued them both. The centerpiece of the film is an annual gangsters ball, “The underworld’s armistice—when, until dawn, rival gangsters bury the hatchet and park the machine-gun.“ There’s a “moll of the ball” contest, where votes are bought, proudly and in the open, and which Feathers wins. Rolls is initially reluctant to go, feeling too attracted to Feathers, but Bull tells him, with his usual bonhomie, “Everybody with a police record will be there!” But it’s at the ball that he first gets an inkling of their attraction for one another, and he turns angry and jealous; then he gets drunk and passes out, giving Buck, amid the mounds of leftover ticker-tape, the opportunity to attack Feathers in a back room. I assumed it would be up to Rolls to save the day but I assumed wrong. Instead, Buck’s moll rouses Bull, who not only saves Feathers but follows Buck back to his flower shop and guns him down in front of the “Rest in Peace” floral arrangement Buck was saving for Bull. Nice touch.

I also assumed Rolls, who had once been a lawyer, would now come to Bull’s rescue in the courtroom. Wrong again. Instead, not only is Bull found guilty of killing Buck but he’s sentenced to die for it. I’m like “Really? A gangster tried to rape his girl and he killed him in self-defense—and no one could lessen the sentence?” It’s moments like that when you get what the British censors objected to. Justice system doesn't look too justice-y.

Like Cagney in “Angels,” Bull is taking his death sentence with a “Them’s the breaks” shrug until everyone starts talking up what an item Feathers and Rolls have become. They’re not, or at least they take every step forward reluctantly and suffused with guilt. They also try to spring Bull. The plot is convoluted and fails quickly, but Bull assumes it was never put into action, and he becomes so enraged at the betrayal that he breaks free. At his hideout, he confronts Feathers, who denies all; then he fends off the police, who—in another touch the British censors probably didn’t like—turn the apartment building into a shooting gallery. Alerted late, Rolls risks his life to get through the police line to give Bull the keys to a secret passageway that could lead to safety. (Wait, secret passage? In an apartment building? This would only work if they were in the basement, which, based on where the police guns are aimed, they’re not.) Seeing the sacrifice Rolls made for him, Bull makes one for them. He lets them use the secret passageway and then gives himself up. A cop mentions he went through a lot for just another hour. “There was something I had to find out,” Bull responds. “And that hour was worth more to me than my whole life.”

Grace notes
Silent movies can be a slog, and there were moments when this one dragged—the mopiness of the couple, gazing into the middle distance—but mostly I was mesmerized. It’s beautifully framed and photographed, and makes great use of shadows. Sternberg made his name with the early arthouse film “The Salvation Hunters,” and the artistry is there in this commercial project. There’s a great sequence at the hideout after Bull has escaped prison. Alone, he hears someone in the hall outside, and Sternberg shows us the shadow of an official-looking man skulking along. Bull listens at the door, peers through the keyhole, then throws it open to see ... nobody. Just a bottle of fresh milk left by the milkman, along with a small, interested kitten. He brings both inside while he sits in a chair and thinks. Becoming aware of the kitten again, he absent-mindedly sticks his thick finger into the bottle and lets the kitten lick off the milk.

There are so many grace notes like that, nice, unnecessary touches, like Feathers’ feather slowly floating down into the Dreamland Café and to the attention of Rolls Royce. (Sternberg to Bogdanovich: “I even had feathers sewn into her underwear.”) I also love the reminders—like with the milkman—of the disappeared life we used to live. Did we really use so much ticker-tape? I still can’t get over that flower-water vending machine. Was that really a thing? When did it come in and when did it go out?

Like so much that’s innovative and artistic, the suits didn’t know what to make of “Underworld,” and Paramount was initially reluctant to release it, then just put it in one theater in New York, where they assumed it would get no notice and drop from sight. Instead, it became a huge hit, helped make the careers of everyone involved, and helped make the gangster genre.