The New York Yankees are the 1%

I went to the Mariners game yesterday afternoon against the New York Yankees. It was the game after the game A-Rod got hit by a pitch from Felix Hernandez and broke a bone in his hand (out 6-8 weeks), and two games after Ichiro switched sides, and the teams were 1-1 in the series. For the year, of course, the Yankees were 58-39, the best record in baseball, while the M's were 43-56, the second-worst in the AL. The Yankees had a squad of All-Stars and future Hall of Famers: Derek Jeter, Robinson Cano, Ichiro, A-Rod, Curtis Granderson, Mark “Paul Fist-in-Your-Face” Teixeira, Eric Chavez. The M's? A Triple-A squad, basically, with some potential future stars. One of them, Justin Smoak, was now back in Triple-A after sinking below .200 again. Sinking below .200 is generally not cause for dismissal on the M's this year—see: Carp, Peguero, Figgins, Ryan, Kawasaki and Olivo—so it must mean the M's have hope for Smoak. They think he's still worth fixing.

Anyway, I went to the game without much hope. I assumed the Yankees, facing a Japanese pitcher, Iwakuma, with all of three game-starts under his belt, would pull out the rubber game.

It began poorly, too. I'm not talking Derek Jeter's homerun in the first inning to put the Yankees up 1-0. I'm talking about walking around before the game even began. Everywhere you looked you saw Yankee fans, dressed in their JETER jerseys, or their MANTLE jerseys, or their A-ROD jerseys (OK, just one of those.). They overwhelmed Safeco Field. They strutted around like they owned the place.

I went with my friend Andy and his family. Andy's from Bremerton, Wash., but now lives in Hanoi, Vietnam, and he's visiting family for the summer. He thought the Mariners were family, too, which is why we all went, but he came not knowing one player on the team. The Yankees he knew.

One of my favorite stories about Yankee Stadium comes from Andy. He went, fairly innocently, to an M's-Yankees game in the mid-1990s, back when there was a real rivalry between the teams, and sat in the right-field bleachers wearing a Mariners cap. As the game progressed, as the abuse that rained down on Mariners right-fielder Jay Buhner got more scatalogical and homophobic (“Buhner takes it up the ass, no va-so-line!”), several leaders of the loudmouth crew began pointing out fans in the stands who were wearing the caps of other teams. Mets fan in particular were singled out. And whenever an apostate was found, the entire bleachers serenaded him with this chant: “Assss-hole, assss-hole, assss-hole.” Eventually Andy was discovered, got his chant, and turned and doffed his cap good-naturedly to the crowd. Then everyone went back to concerning themselves with Jay Buhner's rectum.

I've actually heard worse stories about the right-field bleachers at Yankee Stadium: caps being taken away and ripped apart. Fistfights. Playoff games being decided by fans turning flyouts into homeruns. You know.

I get the idea: Yankee Stadium is their home park and you enter it at your own risk. But increasingly Yankee fans have invaded other stadiums, with their JETER and MANTLE and GEHRIG jerseys, and take over. They're like Rome in the days of Caesar. They're like Nazi Germany circa 1941. They're like that table full of Nazis at Rick's Cafe Americain in “Casablanca,” singing German songs while everyone around them, all the Free French, sit in disgust and contempt and a pure, burning hatred.

I tried to ignore them during the game. We sat 300 level behind homeplate, and, besides Andy and me, we had grandparents, a mother, and three kids. Plus Patricia. It was no place to start an “asshole” chant.

Besides, for most of the game, the M's were winning. In the bottom of the first, with one out, the M's strung together a single, a single, two walks and a groundout to take the lead, 2-1. The Yankees had a man in scoring position every inning of Isukawa's five innings of work but plated no one besides Jeter, who plated himself. They went hitless in the sixth and seventh. So we were still up, 2-1.

By that point, in the top of the eighth, the Yankees had loaded the bases, and pinch-hitter and backup shortstop Jayson Nix cleared them with a double, and the Yankee fans around me and in the stadium, invaders all, the Nazis at the table in “Casablanca,” roared their approval. They began a “Let's go, Yan-kees!” chant, which M's fans, tepid on a normal day, tried to drown out. It worked. Kinda. Then with two outs, Russell Martin singled to plate Nix, and Maj. Strasser and the Nazis around the table roared some more and sang their songs and chanted their chants.

And that was my “All I can stands, I can't stands no more” moment.

I went to a nearby group of Yankee fans, no doubt from Idaho or Montana, and laid it out for them. “The game's already over,” I said. “You've already got a two-run lead. The M's aren't going to come back from that. Basically you're cheering to keep the game going longer.”

One of them, the near one, said something like, “Way to have faith in your team, dude.”

I looked at him. I told him I did have faith in my team. On the road. I said they could hit on the road. But they had trouble hitting at Safeco. Why ignore what was true?

It was a bad response. I should've responded this way:

Faith in my team? In this team of Triple-A kids playing that team of All-Stars and future Hall of Famers? My team with its $70 million payroll playing your team with its $200 million payroll? My team with its idiot management who just wants to remain competitive within its division, and can't even manage that, versus your team for whom losing the World Series is a bad season, and who then open up the coffers again because they can afford to? Faith in my team? Do you have any fucking idea what it's like for the other 29 teams in Major League Baseball, you douchebag, you fuckstick, you oblivious cunt? Your team wins a rigged game. Do you get that? They win a rigged game and then attribute their success to “hard work.” They're the 1% of Major League Baseball. They think they're winning the game but they're ruining the game as surely as the 1% is ruining democracy.

I know. Not exactly 'La Marseillaise.“

Either way, I should've said more, or less, because I carried all I didn't say, all of that hatred, with me from the game, and on the bikeride home, and into a tawdry dinner that tasted like ashes, and then into a restless, headachey sleep.

The New York Yankees, with their $200 million payroll, came into town, took our franchise player while holding their noses, and won two out of three games against a team of Triple-A kids, including the last game, 5-2. Their fans in the stands cheered like it meant something. Like it was news. 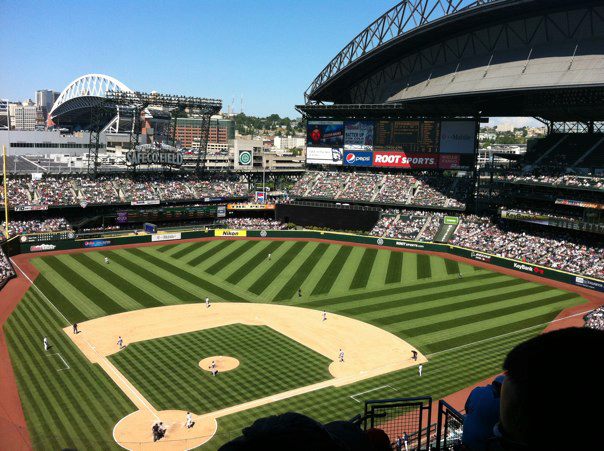 ”And here ya are. And it's a beautiful day."