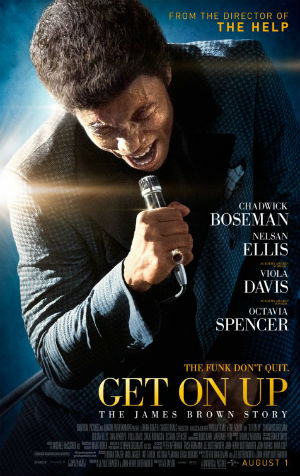 I’d read somewhere that “Get On Up,” the biopic of James Brown starring Chadwick Boseman (“42”), and directed by Tate Taylor (“The Help”), was a by-the-numbers biopic. That’s true only if numbers go like this: 101, 57, 4, 44, 6. The movie jumps around from 1988 and the bizarre circumstances surrounding Brown’s arrest in Albany, Ga.; to 1968 and his tour of Vietnam; to 1939, when his mother (Viola Davis) abandons him in the South Carolina woods; to 1964 and the disrespect of having some nothing band, the Rolling Somethings, close his show; then back to ’39/’40 again; then back to the ’60s. Like Billy Pilgrim, it has come unstuck in time.

That’s unique for a biopic, which makes the opening all the odder. We hear a big crowd, people chanting and stomping, then see Brown in his later years walking backstage before a show. Sound familiar? Of course it does. Not only is it the beginning of almost every music biopic ever made, it was parodied to perfection in the otherwise disappointing satire, “Walk Hard.” “You’re gonna have to give him a moment, son,” Cox’s right-hand man tells the stage manager. “Dewey Cox needs to think about his entire life before he plays.”

Most music biopics are by-the-numbers in this way, too: hardscrabble beginnings, slow rise, white hot fame, drugs and/or overwork, fall, recovery, redemption, lessons learned. “Get On Up” starts this trajectory but veers sharply. The fall, such as it is, is caused more by hubris than drugs. And no lesson is really learned—certainly not by James Brown. In the end, he remains as imperious, and impervious, as ever.

Here’s a question: Does the movie consider him genius enough to justify this?

Boseman’s got the feeling

Kudos, by the way, to Chadwick Boseman. I think I first saw James Brown as parody— Eddie Murphy doing the celebrity hot tub bit on “Saturday Night Live”—and soon everyone was doing their version of Murphy doing James Brown. How tough it must be to bring to life someone who’s been so caricatured; who is so easy to caricature. But Boseman does it. He does it, interestingly, not by showing us, say, a quieter, more complex side of the man (see Michael Mann’s “Ali”), but by pushing further into the caricature. Brown was the imperious dervish onstage and off. He had a simple, blunt philosophy: Grab what you can, be what you are; there’s only you. Just don’t try to take the stage from him. Or his toilet. Or really anything of his. Or yours.

I was less impressed with the role of Ben Bart, Brown’s first manager. “They’ve got to stop giving Dan Aykroyd these roles,” Patricia said as we left the theater. Indeed. He brings little. Aykroyd makes a word or two sound pungently New York/Jewish, as Bart was, before we’re back to a clipped Chicago sound. Was there no Jewish actor available? Jeff Goldblum? Mandy Patinkin? Mila Kunis? And what is the role exactly? Recognize Brown’s talent, give him a stage, and step back? Supposedly Bart came up with the idea of using kids to promote Brown’s concerts, saving the Godfather of Soul thousands if not millions in promotion fees, but the movie gives this idea to Brown himself. Supposedly when Bart died of a heart attack Brown couldn’t be bothered to attend the funeral, but in the movie version he’s so distraught he not only shovels dirt onto the casket but keeps doing it, bereft, sobbing, until he’s pulled away. Why? Why did this one man mean so much to him when most everyone else meant so little? And did Bart manage Brown’s money, too? Is that why Brown has back-tax issues, or did they arise only after Bart’s death? The movie makes it seem Bart was the wise counselor but we never get any of this wise counsel.

If I knew too much of the history in Boseman’s last film, I know too little of it here, and was often confused. Yvonne Fair (a scrumptious Tika Sumpter) shows up on the tour bus to catcalls from the band, shuts them down, and is then highlighted onstage as if in a silent battle with an audience member for Brown’s attention. Except Brown barely gives her a look. Question: Was the woman in the audience, Dee Dee (Jill Scott), already Mrs. James Brown or did that come later? Is this where they met? And if James never focused on Yvonne, why does the movie?

The movie, to its credit, doesn’t ignore what an asshole Brown was. He’s beats Dee Dee, pushes and insults his band, undercuts his best friend Bobby Byrd (Nelsan Ellis, MLK in “The Help”). He’s a poor payer-backer. Byrd gets Brown out of prison, and sets him up with his band; but when the recording studio wants Brown alone, the Famous Flames, Byrd included, walk out. Brown lets them.

So when does Byrd return? Do we ever find out? One of the more vocal members of the next James Brown band, Maceo Parker (Craig Robinson), asks Byrd, late at night at a bar, why he puts up with Brown’s shit. The answer? Byrd recognizes Brown’s genius. In seeing what Brown is, he realizes what he lacks, and why he’ll never be the star onstage. He’s Salieri to Brown’s Mozart, but a benevolent Salieri to an even more ego-driven Mozart. This should have been the focus of the movie, to be honest, but the movie only makes it the focus at the end. Long estranged, Brown, without apology, visits Byrd at his home in ’93, then Byrd and his wife go to the show, the comeback show, where Brown stops the funk mid-beat and sings a beautiful old gospel number. As a gift for his old friend? As a final imperious send off?

“Get On Up” is a not-bad, better-than-I-thought-it-would-be, warts-and-all approach to a music biopic. I just got the feeling (baby baby) that Tate Taylor thinks James Brown’s warts are beautiful, too.