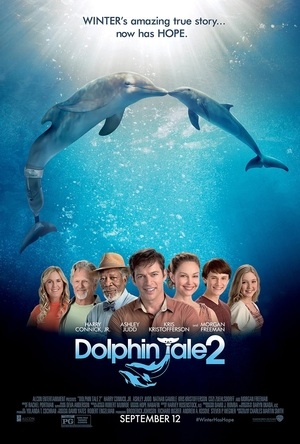 The beginning of “Dolphin Tale 2” startled me. The soporific style of the first movie was gone, replaced by a pulse-pounding, hand-held-camera jerkiness, and a torrent of marine biology lingo, as our team from Clearwater Marine Aquarium (CMA) rescue another beached dolphin, quickly dubbed “Mandy,” off the coast of Florida.

In fact, it’s exactly like a documentary. Because it’s part of a lecture that Sawyer Nelson (Nathan Gamble), the lead of the first film, and now staff at CMA, is giving to the new volunteers, including a pretty girl who has eyes for him. Meanwhile, Hazel (Cozi Zuehlsdorff), his friend from the first film, stands off to the side giving worried looks. Isn’t he supposed to like her?

The original “Dolphin Tale” was so anodyne it felt like a 1950s TV series: episodic problems resolved in an ultra-safe atmosphere, often by parental, generally fatherly, advice. This is more of the same. Will Hazel’s dad (Harry Connick, Jr.) let Hazel take charge at the aquarium more often? Why is Rufus, the comic-relief pelican, obsessed with an injured tortoise? Will Sawyer go on the three-month-long Sea Semester or is he too worried about Winter, the real-life, tailless dolphin, with whom he has a bond?

That’s the main conflict. Winter’s companion dies in the first act, so she’s lonely. She refuses to wear her prosthetic tail, meaning she swims side-to-side rather than up and down, which is causing scoliosis. Plus she’s lashing out—even at Sawyer. Can they find a companion for her before the U.S. Dept. of Agriculture take her away?

Fans of the first film probably won’t mind the facile resolutions to these problems. The rest of us should swim elsewhere.

—This review originally appeared in the Seattle Times.