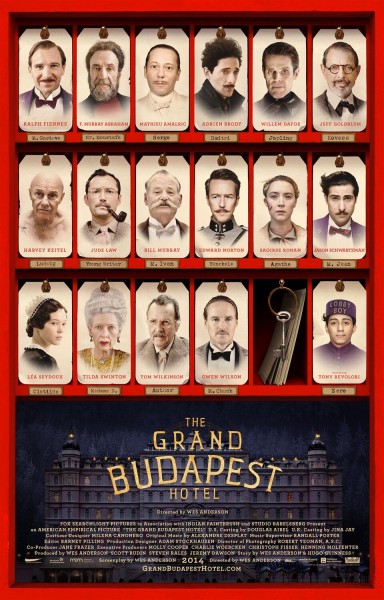 There is, at the end of “The Grand Budapest Hotel,” Wes Anderson’s latest bit of cinematic whimsy and charm, a description of its main character, Gustave F. (Ralph Fiennes), a fastidious, tragicomic, but ultimately dignified concierge at the title hotel in a imaginary Eastern European country, the Republic of Zubrowka, during the years before World War II, that is one of the better descriptions of Wes Anderson and his films I’ve encountered.

Our narrator, Mr. Moustafa (F. Murray Abraham), has been asked, years after the main events in the movie, if he traded a fortune for the now-faded Grand Budapest in order to keep alive the world of M. Gustave, his mentor. He smiles sadly and says:

To be frank, I think his world had vanished long before he ever entered it. But I will say he certainly sustained the illusion with a marvelous grace.

That’s lovely. And isn’t it Wes Anderson? So much about him feels like it belongs to a vanished, bygone era. Increasingly, Anderson’s bygone era isn’t even vanished (1960s British music, 1950s board games), but imaginary, and as exquisitely detailed as the contents of the Glass family medicine chest in J.D. Salinger’s “Zooey.” From this film alone, see: L’Air Panache, Mendl’s Courtesan au Chocolat, and the masterpiece “Boy with Apple” by Johannes van Hoytl. See also: the names of several characters (Gustave F., Serge X. and Madame D.), who, in the tradition of 19th century literature, have their family names redacted, as if revealing them is something that’s just not done in polite society.

That society, sadly, is about to go away. It’s 1930s Europe. The country of Zubrowka may not exist but Fascism does. And it’s about to collide with the better manners of M. Gustave.

A world of manners

We enter in stages.

The movie begins in the present day. A girl with a dog-eared book genuflects beneath the statue of a bespectacled man, “OUR NATIONAL TREASURE,” where myriad keys are hung from hooks around its base. One wonders: Who is the man? And what’s the deal with the keys?

Then we cut to 1985, where the national treasure, an unnamed author (Tom Wilkinson), is talking to the camera and answering the question people always ask of writers: Where do you get your ideas? His answer is unique. He says after a modicum of fame, you don’t have to think things up anymore. People offer you stories unbidden.

Then we cut to 1968 and the faded, Communist-infused glory of the Grand Budapest Hotel, where the youthful national treasure, now Jude Law, is recuperating after a mild case of “Scribe’s Fever.” The nearly-empty hotel is full of characters, including Mr. Zero Moustafa, the owner, and the richest man in Zubrowka, who, after introductions in the underground mineral baths, tells the author, over a grand dinner, the story of M. Gustave and the Grand Budapest Hotel.

M. Gustave, though modeled on a mutual friend of Anderson and artist/screenwriter Hugo Guinness, will be familiar to anyone who knows Anderson’s work. As Royal Tenenbaum had Pagoda, Gustave has Zero (Tony Revolori), the loyal understudy. As Max Fischer had a coterie of men to whom he dictates precise orders, so does Gustave at the Grand Budapest. One of my favorite moments in “Rushmore” is when Max gets kicked out of his beloved prep school, winds up in public school, and on the first day gives a speech before his newer, tougher, slacker classmates. “Now he’s in for it,” you think. Except he isn’t. He remains himself, geekily himself, and gets along. Similarly, here, Gustave is taken from his beloved Grand Budapest to prison, where, despite his newer, tougher cellmates, he remains himself and gets along. He pushes a metal cart past prison cells offering up plates of mush. He struggles to keep up appearances:

No? Anyone? You—with the very large scar on your face? Come now, try it. It’s actually quite warm and nourishing this morning. It needs a dash of salt.

I like this idea—treat the world with respect and it will return the favor—even if I don’t quite believe it. Some aspect of it may be true, but it’s only true until it isn’t.

At one point, we get this exchange:

Dmitri: You’re not getting “Boy with Apple” you goddamned little fruit!
Gustave (legitimately hurt): How’s that supposed to make me feel?

Fiennes’ line readings are wonderful. He’s wonderful. Do we suggest Oscar nomination? It’s a bit early in the season. Plus “Budapest” is a comedy, and comedies are overlooked by the Academy. Plus no actor Anderson has directed has received an Oscar nomination. These are all the Oscar nominations from all of his movies:

Is the Academy right to short-change him? There’s certainly a two- dimensionality to his style. He’s a master of the straight-on shot and the profile shot and not much in-between. It’s as if everything’s been flattened. It’s as if we’re seeing it all in the pages of some exquisite book.

His characters have a similar two-dimensionality. They represent a thing and don’t deviate much from that thing. Question: Are they becoming more two-dimensional? In the early Anderson films, his protagonists, in order to grow, in order to become the very thing they were pretending to be, needed to forgive and embrace their enemies: Herman Blume for Max Fischer; Henry Sherman for Royal Tenenbaum; Alistair Hennessey for Steve Zissou. Is this still true? Redford, the antagonist in “Moonrise,” remains outside the circle, unforgiven and unforgiveable. Same here with Jopling and Dmitri. Is this a wiser lesson? An admission that you can’t embrace everyone? That there are bastards in the world?

That said, even in Anderson’s flattened world, there is a three-dimensionality to Fiennes’ performance. You sense, particularly in prison, a melancholy beneath his tidiness. He keeps up appearances even though he knows he’s in a losing battle.

A world of yesterdays

Anderson still has his toys. Along with the Russian nesting dolls referenced earlier, we see a dollhouse (our first shot of the Grand Budapest), and a Rube Goldberg contraption: the prison breakout of Gustave and his cellmates, which is the most needlessly complicated enterprise ever. After digging out of their cell, going through a crawl space, knocking out some prison bars, taking a rope ladder down the tower, they still have to swing over a roomful of sleeping guards. And even then it’s not over. I think Anderson gets a child’s joy out of seeing how long he can keep that marble rolling.

But he’s growing a bit. He’s dealing with the darkness of history and the human condition. We see murders, a beheading, a blow job, and a stand-in for the S.S., the Z.Z., that takes over the country as well as the Grand Budapest Hotel. We sense melancholy.

Anderson says “The Grand Budapest Hotel” was inspired by the works of Viennese writer/poet/biographer Stefan Zweig, particularly his memoir “The World of Yesterday,” and that title is certainly reflected in the movie. We go through a world of yesterdays (1985, 1968, 1932) to get to a protagonist who lives in a world of yesterday: a world in which 19th-century manners matter. As for Wes Anderson’s world of yesterday? I would argue it’s a world where art and literature matter; where they’re of such primary importance that a country actually builds a statue to a contemporary writer. You don’t have to look around much in our world to see what an illusion that is. But in “The Grand Budapest Hotel,” Wes Anderson sustains that illusion with a marvelous grace.