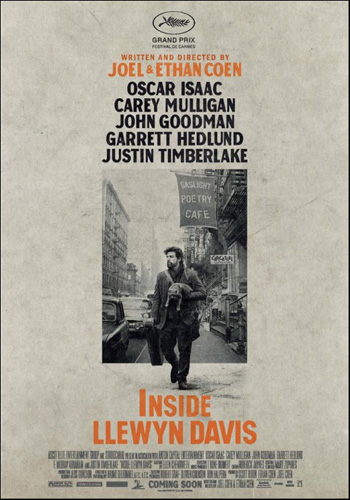 I’d heard it was the way the Coens treated him. They were like Old Testament gods toying with their creation again, making sure nothing went his way again, and people were, I heard, objecting. But that’s not the problem with “Inside Llewyn Davis.” The problem is the ending. It just ends. Au revoir.

It ends where it begins, but is it ending where it began—i.e., with the same scene— or is it merely similar to the opening scene, as waking up at the Gorfeins’ place at the end (purring kitty, sticking head sideways out doorway) is similar to waking up in the beginning? It’s part of the nightmarish cyclical nature of the life of Llewyn Davis (Oscar Isaac), and of all of our lives, really. He and we are trapped in it and we’re not allowed out. Except one way.

We get Bob more prominent in the end, a young Bob Dylan coming onto the Gaslight Cafe stage with a bit of a song that sounds like Llewyn’s, or like traditional folk songs anyway (the whole “fare the well” thing), which is the final nail in the coffin for this Dave Van Ronk-alike. The Coens own up to that, by the way: the Van Ronk comparison. Even the album names and covers match. But it stops there. Van Ronk ruled. He was the Mayor of MacDougal Street, and beloved. Llewyn is compressed, bitter, and so very very tired. He is the talent doomed to never be known. He is the modern ...

Let me back up for a second.

There are some great line readings in the movie, particularly from Carey Mulligan as Jean, part of the folksinging husband/wife duo Jim and Jean (Jim = Justin Timberlake), but my favorite may be from F. Murray Abraham, who plays Bud Grossman, AKA Albert Grossman, the man who managed Bob Dylan, and who created Peter, Paul and Mary. The great odyssey in the movie, the attempt to get out, and up, rather than out and down, which is what Llewyn’s former singing partner does (off the George Washington Bridge), is Llewyn’s trip to Chicago to play for Bud at the Gate of Horn. It’s nightmarish getting there, sometimes even hellish, but he does it. And there’s this devilish figure waiting for him at the end.

Llewyn has a copy of his album with him, “Inside Llewyn Davis,” but Bud, rather than listen to the record, wants to hear him live. “You’re here, play me something.” Pause. “Play me something from inside Llewyn Davis.” That’s it. It’s perfect. It has just the right soupçon of condescension about Llewyn’s album title and maybe his talent. F. Murray is so good in such a small part, and you’re so grateful to be seeing him onscreen again, that you might not make the connection immediately. I didn’t. It wasn’t until we were walking back to the car, Patricia and I, talking over the movie, and I was thinking that Llewyn Davis was the talent destined to be unknown, the talent usurped by the greater talent, Bob Dylan, making him ... of course! ... the modern Salieri, the man usurped by Mozart in “Amadeus,” and who was played by, of course, F. Murray Abraham.

Of course Llewyn isn’t even Salieri. Salieri was hugely successful in his time, beloved by kings, but he also recognized the greater talent in Mozart. Llewyn gets nowhere. And does he even recognize the greater talent in Dylan? We don’t know. He listens for a few seconds and then leaves to get beat up in the alleyway for past crimes.

At the Gate of Horn audition, Llewyn plays a beautiful ballad, “The Death of Queen Jane,” and plays it well, and there’s a pause. Then Grossman says, “I don’t see a lot of money here.” Then he talks up Troy Nelson (Stark Sands), the too-innocent, cereal-slurping, folk-singing soldier stationed at Fort Dix, who, Grossman says, “connects with people.” Meaning Llewyn doesn’t. But Grossman gives him a way out. How is he with harmonies? Does he want to be part of a group he’s putting together? This will be Peter, Paul and Mary, one assumes, and Llewyn could’ve been Paul in that configuration, but he says no. He’s a solo act. It’s his way or the highway so it’s the highway. CUT TO: Llewyn struggling comically forward in the snow against the bitter Chicago wind.

Maybe that should’ve been the end: rejected by Salieri. But the Coens needed Llewyn to return to New York and get trapped in the bottle again.

I’ll say this: Not many filmmakers do place better than the Coens, whether it’s Florida in the 1930s, Minneapolis in 1967, or Greenwich Village in 1961. The streets Llewyn walks down all seem like the street Dylan walks down with Suze Rotolo on the cover of “The Freewheelin’ Bob Dylan.”

They get all the little details right: the caricatures of Llewyn’s agent, Mel Novikoff (Jerry Grayson), that he has framed on his walls, along with the framed copy of SING OUT! magazine, the folk music staple. Even the Gorfeins (Ethan Phillips, Robin Bartlett), the ultra-liberal, upper west side couple who let Llewyn stay there, are perfect. Their guests, too, Marty Green and Janet Fung, who rename themselves the Greenfungs, not to mention the humorless bearded music historian Joe Flom (Bradley Mott). I’m curious, though, why the Coens named him thus, after the famous M&A attorney. And why name Llewyn’s former singing partner, the one who jumped off the George Washington Bridge, Mike Timlin? What is it with the Coens using other people’s names? We got Ron Meshbesher in “A Serious Man” and Al Milgrom here. Is it homage? Do they like funny sounding names?

Should we worry about the Old Testament quality to the Coens? They tend to punish all of their creations (it’s called a story) but a few are allowed happy endings: Herbert and Ed McDunnough, Jeff Lebowski, Ulysses Everett McGill. Most are not: Barton Fink, Larry Gopnik, Llewyn Davis. What do these last have in common? Too much pride and prickliness. And Jewishness. The Coens are like Bernard Malamud this way: tougher on their own.

One of the oddities of the trailer is that everyone rails against Llewyn, particularly Jean, calling him an asshole (in another great line reading), but he never does anything really assholish in the trailer; he’s simply put-upon. But in the movie he is an asshole: he sleeps with Jean, explodes at the Gorfeins, gets drunk and yells obscenities at a kindly old woman playing a harp at the Gaslight because he’s mad at someone else. He’s got that prickly, prideful solitariness.

Does his need to be alone relate to the death of his former partner? The Timlin tragedy just hangs in the background. It’s a dull ache in Llewyn’s side that never goes away but is never explained. Same with the 2-year-old in Akron. Same with Jean. Most of Llewyn’s crimes are in the past. When we catch up with him he’s about to be punished.

Hang me, oh hang me

“Llewyn Davis” is also a movie about music, and the music, produced by T. Bone Burnett, is exceptional. The Coens give us entire songs. They hold on the performer, singing, and Oscar Isaac can sing.

“Hang Me, Oh Hang Me,” Llewyn sings in the beginning, and for the rest of the movie the Coens come close to doing it. Do Llewyn’s travails make him a better performer? That would be the easy way out of the story. That’s what most Hollywood movies would do. Llewyn is on this odyssey, often with Ulysses the cat, and he comes back a wiser man, and that wisdom leads to success. That’s the lie Hollywood often tells us, because it’s the lie we often tell ourselves, because otherwise why all this? Why travails, and pain, and sorrow, if it doesn’t lead to something? But here Llewyn’s travails lead to Dylan’s success.

I think I’ve actually written myself into liking “Inside Llewyn Davis.” I want to see it again. The Coens often do this to me. The movie feels like an answer, and I’m just missing the answer, and maybe if I see it again I’ll find it. But I know I won’t. The Coens are masters at giving us the answer of the non-answer. This is another one.