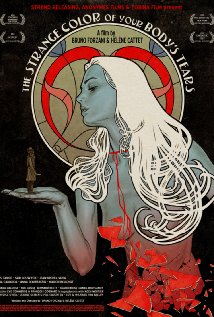 The Italian horror/sex genre giallo, popularized by directors like Mario Bava in the 1960s and ’70s, uses elements of nightmare within its narrative but the narrative itself is fairly straightforward. “The Strange Color of Your Body’s Tears,” a French-language homage to the genre by Hélene Cattet and Bruno Forzani (“Amer”), is less narrative and more nightmare.

It’s also boring. The way other people’s dreams are boring.

As Dan (Klaus Tange) returns to Paris from a business trip, we see, intercut, a woman involved in kinky sex games gone awry. At home, Dan’s wife, Edwige (whose name is an homage to giallo actress Edwige Fenech), is missing, yet the apartment door is chained from inside. How?

Dan searches, obsessed, anxious. A detective shows up, suspicious. An older neighbor woman in apartment 7 sits in the shadows (with great legs) and talks of how her husband went missing. She blames the apartment above, but when Dan ascends the stairs he’s on the roof, where a naked woman stands on the ledge. They share a cigarette.

By this point, it’s almost a parody of a foreign movie: the sexuality, the incomprehensibility, the dreamscape.

It gets more confusing. Does Dan wake with his wife’s head in his bed? Doe he wake to get slashed in the back? Is he awake? Where does sleeping end and waking begin? Do we care?

Everyone has their own story, even the suspicious detective. We get his in flashback. When we came back to the apartment, Dan asks, straight-faced, “What has it got to do with my wife?” I laughed out loud.

The movie, suffused in reds and greens, is as repetitious as hell, and includes many closeups of male eyes in panic or desire, and women, losing clothes or encased in fetishistic gloves, forever out of reach. I found a few lines and images in the second half intellectually stimulating but it wasn’t enough, and the resolution was awful: clouding what felt like a rare insight.

Larger question: Why are we getting all of these arthouse versions of exploitation flicks? They were part of my “11 Worst Movies and Five Worst Trends of 2013,” and they still seem with us.

The review originally appeared in shorter form in the Seattle Times.