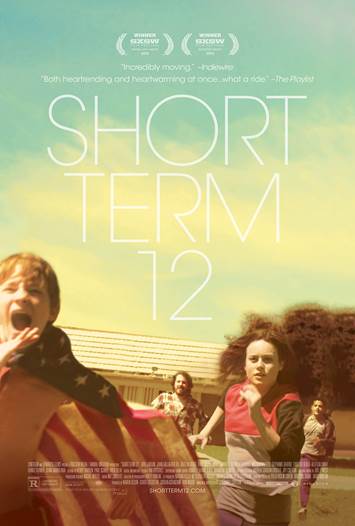 “Short Term 12,” written and directed by Destin Cretton, and based on his 2008 short film of the same name, not to mention his own time working at a foster-care facility, feels natural. The lighting is natural (read: washed out), the dialogue is natural (read: mumbled), the acting is natural (no glam). It’s like a Dogme 95 film without the pretension.

It’s about trouble teens who are helped by troubled staff who aren’t much older than they are. It’s the children leading the children. When do we see anyone over 30 in this thing? I guess when Dr. Hendler (Nora Walters) tells Grace (Brie Larson) she’s pregnant, but she’s only in it for like 15 seconds. I guess when the director of the foster-care facility, Jack (Frantz Turner), appears, but that’s not often. Mostly we just get the kids. It’s almost like a Peanuts cartoon in this regard.

It’s tough to pin down why it’s so good. It might have something to do with its ease and lack of pretension and the feeling it has for its characters. These characters move in a dramatic arc but there’s a cyclicality to the movie, too. Issues are resolved but we wind up back where we started.

The shark and the octopus

We start with storytelling. “There is no way not to tell this right,” says Mason (John Gallagher, Jr.), bearded, amused, laid back. “It’s a storyteller’s wet dream.”

Various staff members at Short Term 12 are standing outside and taking a smoke break and welcoming the newest staff member, Nate (Rami Malek of “The Pacific”), when Mason decides to tell his well-worn story. It’s about a big kid named Wesley who bolted on Mason’s first day on the job. He left the premises and got on a bus, and Mason, who was dealing with stomach issues, followed. But the pressure in his stomach grew worse and when he finally confronted Wesley it all flowed south. That’s the punchline. They’re all laughing about it when one of the kids, Sammy (Alex Calloway), redhaired, pale and skinny, bolts from the place and they have to chase him down. That’s Sammy’s thing, by the way: making repeated and fruitless feints at escape.

All the kids have a thing. Luis (Kevin Hernandez) tends to tease Marcus (Keith Stanfield), who tends to burn with quiet rage, while Jayden (Kaitlyn Dever), the new girl, is flip, closed-off, doesn’t give a fuck. It’s the job of the staff, Grace particularly, to open them up. Yet at the end of the day, in the quiet evenings she shares with Mason, Grace herself is closed off. Traditional gender roles here are reversed: he cooks; she instigates sex. She’s closed off, a mystery, while he wants her to talk about how she’s feeling.

At the moment, she’s feeling pregnant. That’s one of the things she won’t tell him. There’s other stuff: past abuse issues. She cut herself for a while. Jayden cuts herself, too, and Grace suspects Jayden is also abused. Or neglected? Her father is supposed to pick her up for her birthday and doesn’t, and Jayden cuts herself, and ...

To be honest, writing about it lessens it. There’s a subtlety to it. The revelations are just suddenly there, as if they’ve always been there, and are accepted with a barely discernible nod by the other characters. There are dramatic moments and histrionics, sure, but revelations tend to be made quietly and obliquely. One of the best such moments is a short story Jayden writes and reads to Grace. It’s about the friendship between a shark and an octopus. I won’t spoil it.

In life there are those who close us off and those who open us up, and “Short Term 12” is about a group of people who do the latter for a living; then they go home and do it with each other. You could argue that that’s the big battle: to remain open, and open others, in a world that tends to close us off.

That’s how the movie proceeds until we wind up back where we started: with a smoke break and storytelling and Sammy making a break for it.

Not exactly “Free to Be, You and Me”

I didn’t think I’d like “Short Term 12.” The trailer has a ’70s vibe. Not a ’70s film vibe, which would be great, but a living-through-the-’70s-as-a-kid vibe, and dealing with the various “Free to Be, You and Me” group activities and unstructured environments that we were placed in. I hated them. They were supposed to be free and edgy and interesting but they were generally dull and chaotic. Sometimes they seemed a step above “Lord of the Flies.” With me as Piggy. But the movie’s not that.

“Short Term 12” is sort of like Grace herself. It sits next to you and quietly works on you without seeming to. After a while, you just find yourself opening up to it.