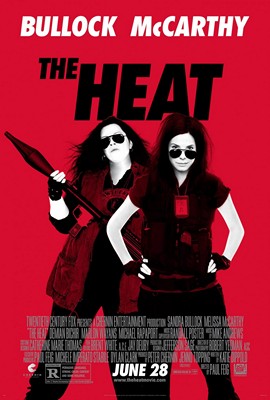 That’s one small step for two women, one giant leap for Hollywood.

Seriously. Go to the Wiki page on buddy cop movies and search for “female.” You’ll get three movies out of more than 100. One is foreign (Michelle Yeoh in “Police Story 3: Supercop”), one is incorrect (Sondra Locke plays a convict, not a cop, in “The Gauntlet”), and Sandra Bullock and Melissa McCarthy in this one. So congratulations are in order. Or “about fucking time” is in order. For all its purported liberalism, Hollywood tends to be behind the curve on so many progressive issues. Like women telling dick jokes.

“The Heat” isn’t quiet about its feminism, either. One wonders whether that, or the comedy, is the best part of the movie. Then one realizes one is talking about both feminism and funny and it’s not remarkable. Suddenly we’re all past that.

Although, honestly, it could’ve been funnier.

The one with the Oscar is Felix

Remember in the mid-1990s when Sandra Bullock played the girl everybody liked? “Speed” and “Demolition Man” and “While You Were Sleeping” and “The Net”? Suddenly she’s playing the middle-aged career woman nobody likes. She played bitchy in “The Proposal” and starchy here. She’s Felix to McCarthy’s Oscar.

Sarah Ashburn is a career-oriented, Ivy-League-educated FBI agent who’s smarter than her contemporaries, mostly men, but she has trouble working well with others. Hell, she has trouble working with dogs. That’s why her boss, Hale (Mexican actor Demian Bichir, who does a lot with a little), isn’t considering her for a promotion. But he will give her an assignment. Nail this Boston drug dealer/killer, Julian, whom nobody has seen, and he’ll think about the promotion.

Unfortunately for her, fortunately for us, she’s teamed with Mullins, a Boston cop who’s her opposite in every way: streetwise rather than schooled; balls-out rather than reticent; cussing a blue streak rather than prissily settling on neutered swear words. This is classic buddy-cop stuff. The point is to take two extreme characters and put them together to round out their rough edges. Each becomes a little more like the other.

Well, kinda sorta. Ashburn learns to work with a partner. She learns to swear and drink and use her sexuality to catch a perp. She learns, after she performs an emergency tracheotomy on a man choking on a pancake, that she’s not always right, either. She might even be wrong about her big case—catching a big-named serial killer. Mullins thinks so anyway. By the end, Ashburn agrees. She thinks she put the wrong man in jail. Based on …? Nothing, really. She just decides it. I think it’s supposed to show that she’s learned humility but it also meant she put an innocent man in the federal pen for a year. She ruined his life. Oh well. Civil lawsuit to follow.

Meanwhile, Mullins learns … what exactly? To be nicer? Kinda sorta?

This is almost always the way in these types of movies. The uptight one loosens up but the loose one doesn’t exactly tighten up. For two reasons. One, the looser, louder one is already more like us, or more like what the average Hollywood exec thinks we’re like, so they don’t have to change much, right? Aren’t they already great? And two, they’re where the comedy generally lies. And you don’t mess with the comedy.

Here’s an example of how delicate comedy is. Ashburn is trying to prove to Mullins that she has friends:

Ashburn: I was actually married for six, seven years.
Mullins: Was he a hearing man?

Not: Could he hear? Not: Was he blind? Neither would be funny. But: “Was he a hearing man?” That made me laugh out loud.

McCarthy gets off most of the good lines. “Tattle tits.” “Keep your finger out of my areola.” “You’ve got to vent that furnace.” These are lines that wouldn’t work in a traditonal male buddy-cop picture. Well, maybe “tattle tits.”

But that’s what’s good about it. Much of the humor is specific to women. Much of it is also feminist. Some guy disparages Ashburn’s looks and Mullins reams him. “Are you giving beauty tips? Do you own a fucking mirror?” A would-be john (Tony Hale) complains that his wife’s lady parts are a mess after their fifth child and Mullins reams him for it. That’s the point of McCarthy, of course, to ream people. But it shouldn’t be lost on us that in a soliciation case, it’s the john and the pimp who get busted; the prostitute goes free.

Whatever happened to the 90-minute comedy?

“The Heat” is written by Katie Dippold (“Parks and Recreation”) and directed by Paul Feig (“Bridesmaids”), but it isn’t up to “Bridesmaids”’ standards. It’s about a half-hour too long, and a lot of the movie is McCarthy going off, most likely improvising, while supporting players are forced to react. The two issues, I’m sure, are not unrelated. Pushing the envelope of comedy means pushing the runtime of movies. “World War Z,” the summer action blockbuster, is actually shorter than this.

That said, “The Heat” isn’t a bad comedy. It feels new because in many ways it is new. It also means that Hollywood has released at least one movie this year that passes the Bechdel Test.

It just could’ve been funnier.