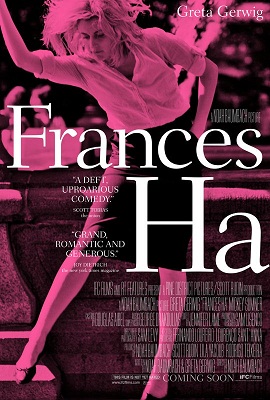 Near the end of “Frances Ha,” Frances does exactly this. She began the movie living with her best friend Sophie (Mickey Sumner), but then there were spats and accusations and anger. Sophie became engaged to Patch (Patrick Heusinger) and moved to Japan, while Sophie, an aspiring dancer, with few friends, less money, and nowhere to live, had her dreams shot down. But by this point in the movie, Sophie has broken up with Patch and moved back to New York, while Frances is making a go with second-tier dreams. Her former dance company hires her for office work and she gets a gig choreographing young dancers on the side. This evening is her debut as a choreographer. It goes well. Unlike almost everything else in the movie for Frances, it goes well. At the reception afterwards, the director of her dance company, Colleen (Broadway star Charlotte d’Amboise), is in the midst of telling Frances how impressed she is with Frances’ original, inventive choreography. She sounds it, too. She means it. And Frances? She looks across the room … toward Sophie … and Sophie looks her way … and they’re sharing something … even though Frances is basically ignoring Colleen, whose voice gets more and more distant in Frances’ head. And in my head I’m screaming, “No! You idiot! This is your moment. Don’t give it over to Sophie!” But she does. Because that’s what Frances does. She cares too much about Sophie and too little about everyone else in the world.

I don’t get the acclaim for this movie. People keep calling it the bastard child of Woody Allen and “Girls.”

If the movie is like “Girls” it’s because it’s about girls, in New York, today, and it has Adam Driver in it. He plays a kind of lothario here. His character is more interesting in “Girls.”

If it’s like Woody Allen it’s because it uses bits from better Woody Allen movies. “Frances” opens with Frances and Sophie having a day in the city, including a play fight in the park. Later, after they’ve broken up, Frances becomes friends with Rachel (Grace Gummer), who’s a bit of a pain herself, humorless and without personality, and the two are walking and Frances tries to start a play fight with her as she always did with Sophie. It doesn’t go well. Rachel yelps and falls out of camera frame and Frances apologizes and they move on.

So, yes, “Frances Ha” is a bit like the bastard child of Woody Allen and “Girls.” If Woody Allen weren’t funny and “Girls” didn’t feel painfully true.

I don’t get the Gerwig love, either. Here, and in last year’s “Lola Versus,” she has a self-consciousness about her, a self-awareness that’s not good for a screen actor. Sure, she’s goofy, but …

If a main character is unlikeable I need them to have something else to maintain interest, and Frances doesn’t have it. She’s not that smart, not that talented, not that interested in other people. She’s clueless. Not to mention the worst dinner party guest ever. She can’t ask a question of the person sitting next to her without putting ironic quotes around it. Then she spews about her own life. Then she asks to borrow the Parisian apartment of a couple she just met. Then she leaves. Whew. I would’ve paid $100 for the camera to stay in the room. So I could hear them talk about Frances after she’d gone. It was probably similar to the conversation I was having in my head. Like … who invited her?

The woman she’s enamored of? Sophie? Even more annoying. If Frances is frenetically self-centered, Sophie is confidently so. The two deserve each other. How they got all of these men interested in them I have no idea.

The first boyfriend we see, Dan (Michael Esper), asks Frances to move in with him. But she can’t. Well, she can but she doesn’t want to. She likes living with Sophie. So she gives up Dan for Sophie. Then Sophie gives up her. Sophie finds a place she likes in Tribeca, which she needs to close on now, and does, and does it without Frances, who winds up living with two men: Lev (Adam Driver), who once made a play for her, and Benji (Michael Zegen), who would like to make a play for her. He never does. Dude.

The story of you two

I get it to some extent. Most movies are loud, awful things about people who are prettier and braver than us. They’re wish-fulfillment fantasy. So along comes a movie that seems to be about real people in real-world situations, where there’s no plot, little story, and more character. So it seems like it should matter. But the myopia Frances suffered from at the beginning (Sophie love), she suffers from in the end. “Tell me the story of us,” she asks Sophie in the first five minutes. “Again?” Sophie responds. By the end, that’s my reaction. Again? Along the way Frances realizes this great lesson: “Sometimes it’s good to do what you’re supposed to do when you’re supposed to do it.” But that’s only a lesson for spoiled children.

I know. I’m getting too old for this shit. The question is: Why isn’t Noah Baumbach?

The title for “Frances Ha” got two things right. It’s about a woman named Frances and it correctly recorded the numbers of times I laughed out loud.