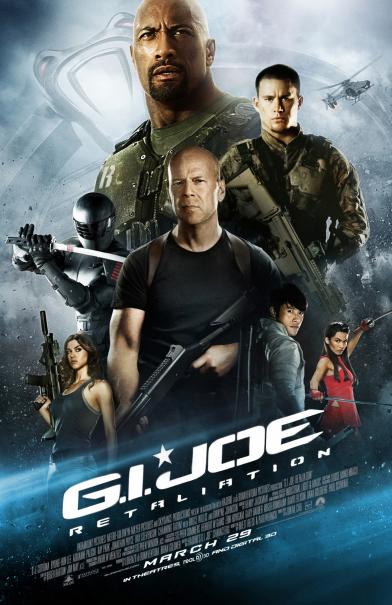 Beware the peacemakers, for they will try to blow up the world.

Could there be a better message for Easter weekend?

Here’s how it happens. In “G.I. Joe: Retaliation,” after Pakistan’s nuclear arsenal almost gets into the hands of terrorists, the President of the United States (Jonathan Pryce) encourages the nations of the world toward nuclear disarmament, and meets said leaders at Fort Sumter, which most Americans, or at least a couple dozen, will recognize as the place where the first shots of the U.S. Civil War were fired. There, he demands obedience and nuclear disarmament. The other leaders balk. So he launches his nukes. They launch theirs. All of them? Apparently. The missiles are flying. Hallelujah, hallelujah.

Ah, but it’s all a ruse! He blows up his, they blow up theirs, disarmament (and, one assumes, fallout and nuclear winter) is thus achieved, which is when POTUS reveals his new secret weapon, the ZEUS somethingorother! Seven of them orbit the earth and don’t launch weapons so much as drop them. To start the fun, he drops one on London. We watch it blown to smithereens. All of London. Gone. Poof.

This president, of course, is not the real president. He’s Zartan (Arnold Vosloo), an agent of COBRA, which is the organization that the G.I. Joes fight.

Who are the G.I. Joes? Complicated question for such simple things.

I had a G.I. Joe when I was a kid but it was just called, you know, G.I. Joe. He was a soldier. He had a fuzzy head and a fuzzy beard and no genitalia. Hasbro got clever soon after my childhood, for they came up with a whole slew of G.I. Joes that had little to do with either “General Issue” or World War II. They got names like Ripcord and Roadblock and Heavy Duty and Snake Eyes. Each had a different power and a different backstory, and like “Transformers” they were a TV cartoon in the 1980s (when I was in college), and after the success of Michael Bay’s “Transformers” in 2007, they made the crossover to movies, too, with “G.I. Joe: The Rise of Cobra,” which didn’t do “Transformers” business but did OK despite horrible reviews.

Most of the Joes from the first movie aren’t back for the second. Here’s who they returned to the manufacturer:

Here’s who they took out of the box:

Is The Rock supposed to rescue every insipid franchise now? That “Fast and Furious” crap was stagnating; then he showed up in “Fast Five” and its international box office zoomed from $363 million to $626 million. “Fast Six” opens Memorial Day weekend.

Bruce Willis’ General Joe Colton is supposed to be the original Joe, the reason this team, such as it is, is named G.I. Joes. But he’s retired now, as he always is in the movies now, even though he keeps an arsenal in the drawers and closets of his home. Because a well-regulated militia being necessary for the security of a free state, etc.

But Snake Eyes (Ray Park) and Storm Shadow (Byung-hun Lee) are back, as is, of course, Duke (Channing Tatum), the star, our hero. Who gets killed after 20 minutes. Tatum had better things to do. Smart boy.

Each character, or toy, gets a simulacrum of backstory. Roadblock is from “the hood,” to which they return to hide out. Jaye joined the military despite her G.I.-issue father, who didn’t think women were good enough. She showed him. Storm Shadow was betrayed as a child into joining the bad guys even though the betrayal was orchestrated by the bad guys. Etc.

There’s a nice fight scene in the, I guess, Asian mountains, involving ziplines and wires and running along mountainsides like Spider-Man. I thought: “That’s kinda fun.” Bruce Willis gets off a good line about cholesterol.

Otherwise it’s big biceps and big guns and no brains. It’s Ray Stevenson’s awful, awful Southern accent, which is apparently payback (served cold) for Kevin Costner’s British accent in “Robin Hood.” It’s the President of the United States, and the rest of the world, as pawns in a game between two military organizations. The bad guys get the upper hand but the good guys win—even if tens of thousands of nukes detonate in the atmosphere and London is wiped off the face of the Earth. It’s playing Army. Except it’s the filmmakers, including producer Lorenzo di Bonaventura (“Transformers”) and director Jon M. Chu (“Step Up 2: The Streets”), who do the playing while we do the paying. In more ways than dollars.

Beware the toymakers, for they are taking over the movies.