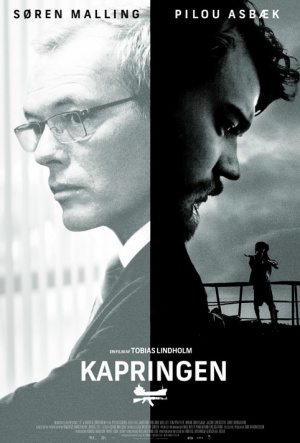 Tobias Lindholm’s “Kapringen” (“A Hijacking”) is such a straightforward, tense, felt rendition of the contemporary hijacking of a Danish cargo ship by Somali pirates in the Indian Ocean that afterwards you feel as if you’ve been held hostage, too. In a way you have. For two hours. Which makes you wonder whether or not you actually liked the movie. Is it as good as you think? Or is your reaction some cinematic version of the Stockholm Syndrome?

Named best Danish film at the 2013 Bodil Awards, “Kapringen” opens with the three-beep sound of a ship-to-shore phone, as Mikkel Hartmann (Pilou Asbćk), the cook of the MV Rozen, talks to his wife. He’s got some bad news. Instead of being home on the 15th he won’t arrive until the 17th. She’s upset until he sweet-talks her, charms her. Then he charms us by talking with his daughter. Afterwards we see Mikkel making food for, and joking around with, the men. He’s gregarious but has his solitary moments, too. There’s a nice scene of him on deck, watching the ocean during magic hour with coffee and cigarette.

Meanwhile, in Copenhagen, we see the CEO of the company, Peter C. Ludvigsen (Sřren Malling), do his thing. A subordinate, Lars Vestergaard (Dar Salim), is having trouble negotiating with the Japanese. They won’t bring down their price. Stuck at $19 million, Ludvigsen wants them under $15, and when he begins negotiations he offers $10. They look shocked, laugh. They reiterate 19. He thanks them and stands to leave. At the door, they say 17. Progress. He turns around. In the end, he gets what he wants.

Both men, by the end, will irrevocably changed.

We never see the Somalis board the ship. They’re just there, making demands, sticking their semi-automatics in the faces of the men. The captain goes down quickly with a sickness (ulcer), so it’s up to Mikkel—who, as cook, still has to work—to negotiate with the pirates for, say, bathroom privileges. Three of the seven men are holed up in a small cabin. They are forced to pee on the floor. They talk of the stink. We smell it. It’s that kind of movie. Eventually they get a bucket. After weeks, they are allowed bathroom privileges.

The chief negotiator for the pirates is a man named Omar (Abdihakin Asgar), who claims not to be a pirate, who takes umbrage at the suggestion. He’s a businessman, same as Peter. The pirates wants $15 million, Peter initially offers $250K, and the rest of the movie, and the hostage crisis, revolves around which side will move, and who will live and who will die.

It would be easy to make Peter the villain in all this. He’s a businessman, a CEO, a negotiator with little apparent emotion in his face. Malling’s eyes are so wide-spread he almost looks reptilian. Plus he never gives in. He keeps negotiating. One could say it’s not in his nature. But he too is held hostage. Throughout the movie, throughout the various negotiations, we never see him leave his temperature-controlled gray offices of Copenhagen. He’s stuck.

An Irish expert in hostage situations, Connor Julian (Gary Skjoldmose Porter), gives him advice, including hiring an actual negotiator to deal with the pirates. But Peter says it’s his company; he will negotiate. Connor is wary of this—emotions don’t help—but he allows it. And the days pass. Day 7, Day 25, Day 39. Each number seems impossibly large. How long could it go on? Where’s Ted Koppel? Where’s the Danish government? Where’s Interpol? We’re also waiting for Peter to either rise to the situation or for his hubris to get the better of him.

To be fair, the situation gets the better of him. Months in, Omar allows Mikkel what he’s always wanted—to talk to his wife—then betrays and uses him. The barrel of a gun is put to his head and his head is forced onto the table and he’s ordered to say the following: “You call the company and tell them to pay or they are going to kill us all!” She does this. She talks to Peter. At which point Peter stops taking Connor’s advice. He gets emotional. He raises his offer even though the Somalis haven’t countered yet. He gets angry and shouts. Omar shouts back. Then gunshots are heard. Then nothing.

In the shock afterwards, director Lindholm does a very smart thing: he keeps us in the room with Peter. He keeps us in the building with Peter. Everything’s silent. Peter’s thinking, brooding, wearing the heaviness of the situation on his face and in his posture. Has he caused the death of a man? He stays in his office through the night, and in the morning his wife arrives, buoyant, with coffee, and pastry, and a smile. He lashes out at her. The truly brilliant thing is we want to do the same. Her buoyancy in that moment is repugnant. She’s from another world. Her presence in the midst of this excruciating, slow-drip horror is an insult. We know what he does is wrong but it’s our impulse, too.

On the cargo ship, a few of the men get closer to a few of the pirates. It’s an unequal relationship, of course. One side is always this close to being humiliated, or this close to being killed. They run out of food, catch a fish, sing “Happy Birthday.” The one song everyone knows. But as the days grind on things get bad. Mikkel isn’t shot but he is psychologically abused. A skinny pirate follows him around, keeps placing the barrel of a gun on his neck, keeps pulling the trigger. Click. Remember the “Mao mao” guy from “The Deer Hunter”? Like that. We want to kill the guy. Mikkel goes the other way. He breaks. Pilou Asbćk gives a stunning performance. In the beginning, in his gregarious stage, he reminded me of a scruffy, bearded Joshua Jackson. By the end, with his thousand-yard stare, I kept thinking of Michael Shannon. Either nobody’s home or the person that’s home is curled up in a corner in the basement. And be careful about ringing the doorbell.

It ends well and not. There’s a payment ($3.3 million) and a death. The deal is only struck because Lars, the subordinate, offers the solution that Peter, the CEO, can’t think of. The student has become the master. But at least Peter is not responsible for a death. In a way, Mikkel is.

When the cheers go up that the deal is made, I thought, “They just paid $.3.3 million to not have men killed.” That’s part of the point, I’m sure. By the end, we’re celebrating a robbery. We don’t even need that final death to make it awful. It’s already awful.

You can’t help but compare the movie to the Hollywood version. Since Mikkel is a cook, I thought of “Under Siege,” the wish-fulfillment fantasy in which terrorists take control of a US Navy battleship, but the cook (Steven Seagal), a former SEAL, takes it back. I also thought of “Captain Phillips,” the true-life, Tom Hanks Somali-pirate movie, which will be released this October. Directed by Paul Greengrass, it looks to have some verisimilitude—it’s not superhero stuff—but it’s still wish fulfillment. It still has its happy ending.

From “A Hijacking”’s IMDb message board, American version:

Hard to believe the Dane's [sic] didn't prep/train for pirates. They were Vikings, at one time. The take away [sic] seems to be, hope for best, prep for worst, keep a Seal Team on retainer.

All Americans are cowboys in their heads but the world is brutal in ways we can’t imagine. It’s also poignant in ways we don’t portray. The faces of Hollywood heroes hide everything but amidst the inhumanity of “Kapringen” there is great humanity. 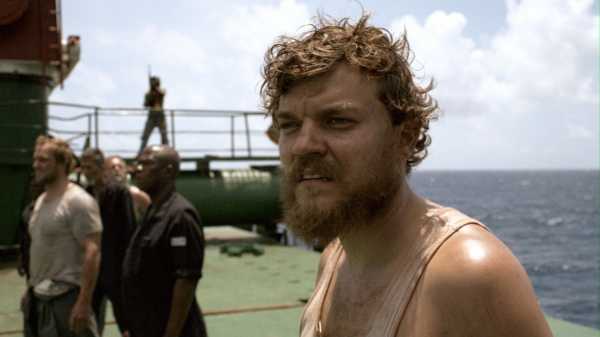 Mikkel (Pilou Asbćk), near the end.