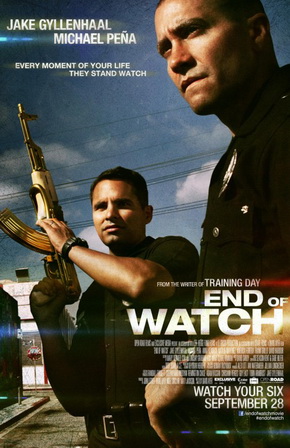 This is what I knew going into “End of Watch.” It’s what I’d read on IMDb.com a few hours before showtime:

Two young officers are marked for death after confiscating a small cache of money and firearms from the members of a notorious cartel, during a routine traffic stop.

So you wait for that story to begin. You see our guys, Brian Taylor and Mike Zavala (Jake Gyllenhaal and Michael Pena), from the perspective of their patrol-car camera, chasing suspects and engaging in gun battle. You see them return to duty after a month-long investigation that clears them, even as the Captain reminds the troops that “an on-the-job shooting is always considered a homicide.” In this manner, Brian and Mike go back on patrol. At one stop in south central LA, Mike gets into it with an old-time gangster (Cle Shaheed Sloan) and fights him—Brian laughing all the while—but earns his respect by 1) winning, and 2) not pulling rank. At another stop, Brian and Mike guard an abandoned, burned-out SUV used in a drive-by shooting. It’s Mexican gangsters taking over from African-American gangsters just as homicide detectives take control of the crime scene from Brian and Mike, who are given police-tape duty. Everyone has their turf battles. They guard the scene for two hours while the detectives work. “Comfortable footwear,” Mike tells Van Hauser (David Harbour), the cop who relieves them. “Policing is all about comfortable footwear.” You see them investigate a missing kids case, finding two stoned adults in the living room and the kids duct-taped in a closet. Afterwards you see Brian in a distant shot overlooking LA, crouching. It’s a kind of exhale.

Brian often films what they do, so a lot of what we see is of the found-footage variety. He’s ... pre-law? Dating various girls. But he’s tired of it. Date 1, they kiss by the door. Date 2, they get it on. Date 3, they have nothing to say. “I want a smart girl,” he says. Mike, the voice of the men in the audience, has no sympathy. What Brian sees as his problem—too much sex with too many women—is not a problem; it’s the wish-fulfillment fantasy of the men in the audience.

But Brian finds his smart girl, Janet (Anna Kendrick), with a master’s in fluid hydraulics, and we get this exchange:

Mike: Did you run her?
Brian: Yeah, she’s clean.

Love that. Googling for cops. We see Brian and Janet sleep together, and the next morning she films herself going through his wallet. A list of girls’ numbers? “You won’t be needing this anymore,” she says, plucking it out. Love that, too.

On night patrol, Brian and Mike face down some partying Mexican gangsters, the ones who did the drive-by, including Big Evil (Maurice Compte), with his blank death stare. Just a Mexican/American stand-off but one assumes it anticipates a third-act confrontation. Later they bust one of his men, carrying drug money in a soup pot and a glittery AK-47 in the back of his pickup. “Liberace’s AK,” they call it. Brian talks about the three essential food groups of patrol: money, drugs and guns. Now they just need the drugs. “The ghetto will provide,” Mike says, not unhappily.

At this point in the story it’s all very episodic. Brian and Mike save kids in a burning building, receive medals of valor from the city, and afterwards, on patrol in a convenience store, talk about how they don’t feel like heroes. Both Janet, and Mike’s wife Gabby (Natalie Martinez), chastise their men for risking their lives to save other people’s kids. But that’s the job. Brian takes Janet to the Philharmonic. Mike and Gabby have a kid. Brian and Janet get engaged, then married. “You’ve got a lot of heart hooking up with a cop,” Mike tells Janet during the wedding toast, adding, “We’re all happy you can make a man out of Brian because we’ve about given up.”

All the while, our two heroes, who don’t know who the true villains of the movie are, bust each other’s balls on patrol while busting perps. And each time they go out, we wonder: OK, is this when the story starts?

In this home, they find illegals imprisoned in a backroom, and a towering DEA agent descends upon them, saying, “You guys fucked up.” In another home, they find a 70-year-old woman in a plastic bag in a back closet. Further in, they come across a room of cut-up bodies, like a scene out of “The Killing Fields.” They find cocaine, too. Shortly afterwards, via infrared camera, we see and hear the drug cartel leader, most likely in Mexico, talking on the phone. “This is just two city cops,” he says. “Take care of those assholes,” he says. Is the DEA doing the filming? Will they warn our guys? They don’t. The original gangster, whom Mike fights at the beginning, does. He heard from a dude in prison. They laugh it off. “We’re cops. Everybody wants to kill us.” Then they forget it. They’re back to shooting the shit. They’re being tailed and they’re arguing about rubber bands.

By the time the final showdown occurs, way into the third act, we’ve realized, “This is the movie.” It’s them in the patrol car and them doing their jobs and them living their lives. After the final showdown, after the shooting gallery and the police funeral, Brian, arm in a sling, looking wrecked, has to speak at Mike’s funeral—just as Mike spoke at his wedding. “He was my brother,” Brian begins, then pauses. The pause continues and fills the room. Finally, he leaves the podium. Even if he could say more, that’s all that needs to be said.

Even after all that, we get them one more time on patrol: a flashback to the day of the shooting. One braces oneself. Will it explain things retroactively? Give a clue to the doings of the Mexican drug cartel? Perhaps indicate a betrayal? No. It’s just them shooting the shit and laughing. It drives home what the movie is, and it’s a reminder of what was lost.

“End of Watch,” written and directed by David Ayer (“Training Day”; “Harsh Times”), is powerful, original, funny and terrifying. It feels as authentic as anything that’s been filmed about cops. It’s the coppiest of cop movies without being a copy. True, our guys run into more trouble in a year than most cops do in a lifetime; but the tone is right, the dialogue and acting so natural they verge on improvisational, and the vernacular so specific to police work you almost need a lexicon to understand what’s being said.

As for the Mexican drug cartel? It keeps on. Mike dies, it lives. He dies not even knowing the story he was in.

One wonders if this isn’t a healthier ending than the wish-fulfillment fantasies Hollywood provides, or the kind of catharsis Aristotle recommended. We get no catharsis here, no justice, so maybe we search for it elsewhere. Maybe we try to make it happen elsewhere. At the least, “End of Watch” is a movie everyone who funds the illegal drug trade should see. Because no matter how much damage drugs do to you, the real damage isn’t done to you.