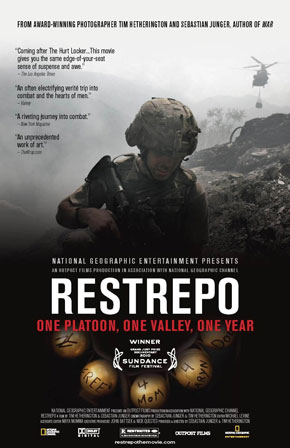 “Restrepo” is the best thing I’ve seen or read about our presence in Afghanistan, and it’s not really about our presence in Afghanistan. It’s about, as the tagline says, one platoon, in one valley, for one year. It goes deep into these soldiers’ lives without telling us much about their actual lives (where they’re from, why they signed up, etc.). It’s an emotional movie precisely because its emotions are restrained. It’s artistic without being artistic. It’s artistic in the Dedalean sense. It doesn’t inspire kinetic emotions but static emotions. The mind is arrested. In this sense maybe Afghanistan itself is artistic. Our mind has been arrested there for almost 10 years.

The directors, author Sebastian Junger (“The Perfect Storm”; “War”) and documentarian Timothy Hetherington (“Liberia: An Uncivil War”), were embedded with Second Platoon, Battle Company, 173rd US Airborne, for parts of a year, from May 2007 to July 2008, and an early scene lets us know just how embedded they were. We’re inside a HUMVEE on patrol when an IED goes off, rocking the vehicle. The men stumble out, including the camera, which is our point-of-view. It’s still filming, shakily, while the men engage in a firefight, but it’s crackling, and there’s no sound. You think of war scenes where a soldier gets shelled and the sound goes out because he’s deafened or in shock. Same here. Our equipment is us.

We first see the men of Second Platoon goofing around and trash talking aboard a train before deployment. Then they ride Chinook helicopters into the dangerous Korengal valley, a beautifully mountainous but militarily indefensible region that stretches six miles along the Afghanistan-Pakistan border, and the trash talking stops. In post-deployment interviews, they fess up to their initial thoughts. Specialist Sterling Jones: “What are we doing?” Sgt. Aron Hijar: “We are not ready for this.” Specialist Miguel Cortez: “I’m going to die here.”

Take the title. “Restrepo”? What the hell’s that? Then on that pre-deployment train we discover that the biggest trash talker with the biggest smile is a guy named Juan S. “Doc” Restrepo. “Oh,” we think. “So Restrepo’s a guy. This is a documentary about a guy.” A few minutes later, we find out Restrepo was killed a month into deployment. “Oh,” we think. “So this is a doc about how these guys deal with the loss of this guy.” Then the company moves deeper into the Korengal valley, establish an outpost there, and name it Restrepo, O.P. Restrepo, in honor of their fallen friend. “Oh,” we think. “So this is... Well, this is about all of it, isn’t it?” Our information is slowly widened. Clarity comes by and by.

O.P. Restrepo is deeper into the Korengal Valley than the U.S. has ever pushed before, and four or five times a day, for weeks and months, Second Platoon engages in firefights with the unseen Taliban in the woods. “They’d ambush us from 360 degrees,” Specialist Bemble Pelkin says. “I felt like a fish in a barrel,” Capt. Dan Kearney says. When there are no firefights, there’s digging and fortifying the outpost; and when there’s no digging and fortifying, there’s goofing around to relieve the boredom. Pemble draws and writes. Specialist Angel Toves plays guitar. The men wrestle, or get newbies to wrestle, or goof around with the ’80s song “Touch Me (I Want to Feel Your Body).” They show off photos of their kids. They hit golf balls into the valley.

The incident with the cow starts out as a joke. A daily briefing, a smile, “we’ll talk about the cow incident later,” laughter from the men. It’s a funny thing. Later, a soldier talks up the day they got fresh cow to eat, saying, “That was a good day.” Later still, three Afghani village elders, with their long beards and taut skin over high cheekbones. enter O.P. Restropo, and it’s seen as a positive step. Hearts and minds are being won. But the elders have come about the cow. It was one of theirs and they want to be repaid. Now it’s a serious thing. The soldiers are apologetic—it got caught in the wire, it had to be killed (then eaten)—but the elders want US$400, which the U.S. higher-ups refuse to give. We’re spending billions on wars but we can’t get US$400 to replace a cow. Instead the owner gets the equivalent in rations: rice and beans. The elders leave. Are we being too tough? Not tough enough? Clarity doesn’t come.

This hearts and minds struggle is fascinating to watch. We see Capt. Kearney, with the best of intentions, having regular sitdowns, or shura, with the village elders, but there’s something Business 101 about him. Support us, he tells the elders, and we’ll “make you guys richer.” What about the killing of civilians? the elders want to know. The Captain says it’s all in the past, on another captain’s watch, and insists that everyone needs to put the past behind them. Does this translate? In a later meeting, frustrated beyond measure, he says to the elders, “You are not understanding that I don’t fucking care.” Is this translated? With all of the specialists we have, one wonders why we have no diplomatic specialists. Why aren’t diplomats embedded with soldiers? Why don’t our head honchos speak rudiments of the language? Why, in the soldiers’ down time, don’t they learn rudiments of the language? Why aren’t we adapting?

“Restrepo” is never not fascinating, which is odd, because we know answers to most of the questions that traditionally drive storytelling. We know who survives (anyone interviewed post-deployment), and we know O.P. Restrepo won’t be the turning point of the war (we’re in 2010 and we read the newspaper), so what keeps us glued to our seats? I think the short answer is we begin to care.

Why do we begin to care? John Ford once said the most interesting thing in the world to film is the human face, and that’s what Hetherington and Junger keep filming. Three faces stand out.

First, there’s Pemble, who’s got a calm, bemused way about him, like he’s holding onto an inner joke, and who’s a warning to every parent who thinks restricted access will diminish lifelong interest. His mom, he tells us, “was a fucking hippy” (he says it nicely) who didn’t allow him toy guns, or violent movies, or violent video games. And yet here he is—a soldier in Afghanistan. To mom’s credit, he seems the least likely of soldiers. There’s little that’s gung ho about him. He feels like he should be drinking in a punk bar somewhere.

Then there’s Hijar, who’s got huge, tattooed arms in the footage, and an intense, haunted face in the post-deployment interviews. He and the others are talking about Operation Rock Avalanche, a three-day tactical walk-though in a Taliban stronghold, which all agree was the toughest part of the deployment. During the operation, Staff Sergeant Kevin Rice was injured and Staff Sergeant Larry Rougle, generally considered the platoon’s best soldier, was killed, and trying to describe it all, Hijar disconnects. His eyes get lost and he stops talking, and after 10 seconds of silence he looks at the cameraman: “Timeout, alright?” Later he talks about needing a different way to process everything that’s happened. He doesn’t want to forget it, he says; he just needs to process it differently.

Finally, there’s Cortez, who’s smiling, always smiling in the post-deployment interviews. One wonders: “Why is this dude smiling?” Then you realize there’s a disconnect between the look on his face and what he’s saying. Near the end, he talks about how he can’t sleep.

I’ve been on four or five different types of sleeping pills and none of them help. That’s how bad the nightmares are. I prefer not to sleep, and not dream about it, than sleep and see the pictures in my head. It’s...pretty bad.

The smile never leaves his face.

“Restrepo” should get nominated for an Academy Award for best documentary feature, and, unless it’s a helluva year, it should win. It’s already got my early vote for one of the best films of the year. There’s not a false moment in it, not a dull moment in it, and in a serious country it would be released into over 4,000 theaters and everyone would see it. But we’re not a serious country. We haven’t been a serious country for decades. A Roman helmet is painted on a wall at O.P. Restrepo, because it’s cool, I suppose, to remind the men of gladiators, I suppose, but it merely reminded me of the fall of the Roman empire, of the fall of all empires, and it made me wonder where we are in that fall.