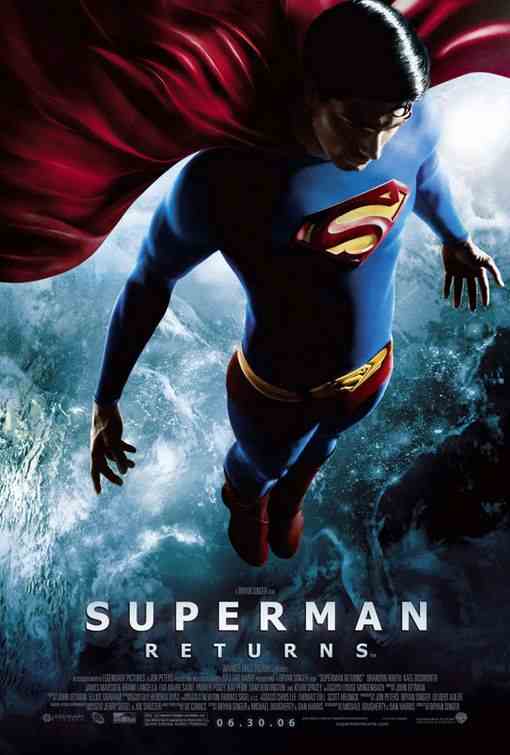 This is one ballsy movie. No pun intended.

In 2006, Bryan Singer, with nothing but success behind him (“The Usual Suspects,” the “X-Men” movies), directed the Superman movie he always wanted to see: a continuation of the Christopher Reeve version that jettisons the awful ’83 Richard Pryor vehicle and the ’87 Golan and Globus abomination, and adds intrigue and depth to where we left off in ’81.

He picks up on the storyline. In “Superman II,” Superman beds Lois. Now, six or so years later, she has a child. Hey, could it…? It could.

He returns Jor-El (Marlon Brando) to us. The Salkinds taketh, Singer giveth back.

He picks up on the Jesus metaphor. Superman dies, is reborn, and ascends. Well, he flies anyway. “I am with you always,” Jesus said at the end. “I’m always around,” Superman says at the end.

We get some of the great lines from the first movie—“Statistically speaking, of course, it’s still the safest way to travel”—as well as the resounding John Williams score in all its iterations. For a moment, as Superman and Lois flew around town, I thought, “OK, so everything but ‘Can You Read My Mind.’” But then they pass Lois’ house, and the camera focuses on their hands, holding in flight, and we get a strain, a suggestion; then suddenly the whole thing wells up again as her love for him wells up again. Because you don’t get the love theme until you get the love.

All of this is ballsy for obvious reasons. We live in a throwaway culture and Singer was involved in the greatest recycling project in movie history. Hollywood gears its product toward 12-to-14-year-olds and Singer was determined to make a sequel to a movie released 25 years earlier. He ignored the original’s third and fourth iterations as if he could rewrite movie history. “You can’t repeat the past,” Nick told Gatsby, to which Gatsby responded “Why, of course you can!” Singer is Gatsby in this regard.

Start with the casting. Brandon Routh makes a good Clark Kent/Superman but he has the misfortune of following the greatest superhero casting ever. Routh is actually several years older than Christopher Reeve was when Reeve was cast as the Man of Steel, but he looks younger. Except it’s supposed to be six years later. Is Superman aging backwards? Like Benjamin Button?

The casting of Lois Lane is worse. Kate Bosworth was 22 when they filmed this. And she has a 5-year-old? From a consummation six years earlier? That’s some awkward math. She should’ve been in high school instead of, you know, reporting for The Daily Planet and shacking up with Supes in the Fortress of Solitude. We have laws, dude.

Kidder and Reeve were adults in a gritty adult world—New York in the 1970s—but these two look like kids and act like kids. Why the world doesn’t need Superman? Really, Lois? She can’t even let go of her anger to be the star reporter she is. The biggest scoop of the year—Superman returns—shows up on the Daily Planet rooftop and she frowns her way through the interview. Her first question is about where he’s been all this time. He says there was a chance Krypton was still there. “I had to see for myself,” he says.

This is Lois’ follow-up: “Well, you’re back. And everyone seems to be pretty happy about it.”

That’s not even a question. Then we get this awful dialogue:

Superman: I read the article, Lois.
Lois: So did a lot of people.
Superman: Why did you write it?
Lois [upset]: How could you leave us like that? [Throws up hands.] I moved on. So did the rest of us. That’s why I wrote it. The world doesn’t need a savior. And neither do I.

I’m not sure who’s being more childish here. Lois assumes her pain is the world’s, her resentments ours. And him. He can’t get past the fact that she wrote the article? That she was angry that he left for five years without a word? What is he—a Vulcan?

It gets worse when they’re about to fly together:

Lois: You know my… Richard. He’s a pilot. He takes me up all the time.
Superman: Not like this.

Who knew Superman was so insecure? You can feel his insecurity throughout the movie. He basks in the applause from the baseball crowd and listens to news reports about himself with a smile. He’s the mightiest being on the planet, the savior of the world, and he’s checking press clippings. Does he Google himself? Read the comments below YouTube clips? “SuperDORK more like! Go back to Krypton, Creepton. LOL.”

It’s even Clark’s job to be covering the blackout story. It’s the story Lois wants, it’s the one Clark gets, but it’s still Lois who uncovers it. She finds its epicenter, finds the boat, “The Gertrude,” anchored there, slips aboard with her son, then comes across Lex Luthor (Kevin Spacey) brushing his teeth. “Lois Lane?” he says with a mouthful of toothpaste. It’s one of the few times Luthor makes us laugh in the movie.

I hate carping like this. I actually think “Superman Returns” is one of the better cinematic incarnations of the Man of Steel, so I want to say the positive. But I keep returning to the things that bug me.

I love it when Lois tells Superman “I forgot how warm you are.” That’s so evocative. This notion that the Man of Steel, instead of being cold like steel, is warmer than us. As if he absorbs more of the sun than we do. Then this:

Superman: What do you hear?
Lois: Nothing.
Superman: I hear everything.

You’re immediately struck by the burden of that. But it backfires. You think: Wait. If he can hear everything, why spend so much time being Clark Kent? Why is he hanging at a bar with Jimmy Olsen (Sam Huntington) and Bo the Bartender (Jack Larson, the Jimmy Olsen of the 1950s)? Why isn’t he out saving all of the people he can hear being beaten, murdered, and raped? Why save some dingbat in a car or bother to stop that bank robber—a guy so stupid he: 1) robs a bank; 2) in Metropolis; 3) the day after Superman returns? And if you’re going to stop the dude, why walk up to him and allow him to keep firing? Bryan Singer wants to show us that even Superman’s eyes are invulnerable but he could’ve done it without making Superman seem like an ass.

There’s a nice scene when Supes lands with a sonic boom—boom!—on the new Krypton continent in the Atlantic Ocean, and fissures develop. And yet … I mean, if he can hear everything, surely he knows where Luthor and his men are. He can hear them breathing. They’re there, there and there. Pick them off. Instead he lands dramatically, with the fissures, and lets his enemies gather.

And how does he not feel all of his powers draining away? If I landed somewhere, and lost 99% of my power in two steps, I think I’d know it. Don’t even get me started on the horror of watching Superman get his ass kicked. There are a lot of painful moments in these movies—the post-reveal dialogue with Lois in “II,” being upstaged by an unfunny Richard Pryor in “III,” all of “IV”—but, for me, the beating of Superman in “Superman Returns” might be the most painful. It’s so brutal, I wouldn’t be surprised if it killed the movie at the box office. Who wants to re-watch a helpless Superman getting his ass kicked by Luthor and his men? Nobody. Superman returned but we didn’t.

OK, then how about the airplane rescue scene? Wow, right? And an homage to the helicopter scene in “I.” Yet why does the original work and the homage not? Is it that the helicopter scene is about revelation (the first appearance of Superman) while this is about return? Is the original rooted in the everyday, the gritty, while this feels like so much CGI? And did the landing have to be in the middle of a baseball stadium? The length of the scene doesn’t help. In “Superman,” from the moment he turns into Superman to “Statistically speaking… ” takes about one and a half minutes of screentime. In “Superman Returns,” it takes five and a half minutes of screentime. It just keeps going.

I like him lifting the kryptonite-laden continent on his shoulders, like Atlas, pushing it into space, then falling back to Earth. The scenes at the hospital are good, too. But it still takes Lois forever to tell him Jason is his son. She should’ve told him as soon as she entered the room. Hell, she should’ve told him as soon as he returned from Krypton. Seriously, what kind of woman withholds that information? From both men? And that’s your heroine? It’s not a bad idea, certainly, having Lois marry Richard White (James Marsden), but it ruins the greatest love triangle in superherodom. Lois loves Superman and ignores Clark because she doesn’t see what’s super in him. It’s the story every man tells himself about every unrequited love. It’s poignant in that way. Here, Lois kinda loves, or certainly appreciates, Richard White, to whom she’s married, but really loves Superman, who’s always around. Sometimes he’s just outside their house, listening in. Right. That’s a little less poignant.

So let me end with two scenes I appreciate without qualification.

The first is the scene outside the hospital, where Ma Kent (Eva Marie Saint) stands with the crowd, unable to visit her dying son because no one knows he’s her son. That’s heartbreaking. It’s also reminiscent of what gay men went through in the age of AIDS. No way Bryan Singer didn’t make that connection.

The second is the moment Superman tells a sleeping Jason something Jor-El told him as a baby—as Kal-El slept on Krypton for the last time:

You will be different. Sometimes you'll feel like an outcast. But you'll never be alone. You will make my strength your own. You will see my life through your eyes, as your life will be seen through mine. The son becomes the father and the father the son.

It brings cohesion to the whole Donner/Singer enterprise, and to this movie in particular. Superman traveled to Krypton to discover he was its last son. Then he traveled back to Earth to find out he wasn’t. He went searching for Krypton but found it in his own backyard.

The son becomes the father