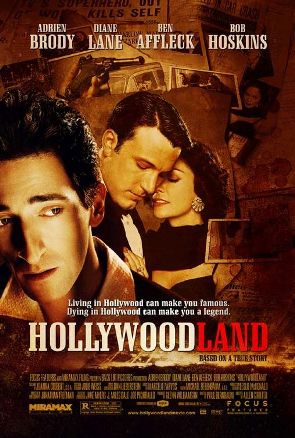 “Hollywoodland” begins with a point-of-view shot of soaring through clouds, a la Superman, then quickly plummets to Earth and Hollywood, Calif., on June 16, 1959, the day George Reeves, TV’s most famous Superman, was found with a bullet in his head. Did he kill himself? Was he murdered? Was it an accident?

The movie suggests all three. It’s less detective story than character study. It’s the story of two men, neither of whom is super. Louis Simo (Adrien Brody) is a marginal private investigator scraping by in Los Angeles in 1959, and George Reeves (Ben Affleck) is a marginal actor scraping by in Los Angeles in the early 1950s. Neither is happy where they are. Both insinuate themselves into situations where they’re not wanted: Simo into the Reeves investigation, Reeves into the tabloid photos of more famous stars. Both men rely on the pocketbooks of older women. For Simo, it’s Reeves’ mother, Helen Bessolo (Lois Smith), who refuses to believe the official police report that her son killed himself. For Reeves, it’s Toni Mannix (Diane Lane), the wife of MGM executive Eddie Mannix (Bob Hoskins), with whom he has an affair throughout the ’50s.

Both men are looking for an opportunity, too: their chance, their shot. Only Reeves really gets it. He just doesn’t recognize it.

From 1939 to 1950, George Reeves appeared in more than 50 films, ranging from Pool Player #1 in a sex hygiene short to the male lead in the World War II-era “So Proudly We Hail!” He also had a bit part in the biggest movie of all time, “Gone with the Wind,” playing Brent Tarleton, one of Scarlett’s early suitors. It was all so close. But by 1950 he was 36, and grasping at what he could. One offer was a dual role in a TV show about a comic-book superhero in cape and tights. He went with it, assuming it wouldn’t be picked up. It was.

He found the “Adventures of Superman” ridiculous. Basically he got trapped by circumstances into playing a character he didn’t like and then got trapped by that character since no one could see him as anything else. There’s a great scene where he’s with friends at an early screening of “From Here to Eternity,” in which he has a supporting role. But this is a year into the six-year run of “Adventures of Superman,” and as soon as he appears onscreen, wearing a Hawaiian shirt and jawing with Burt Lancaster, the crowd buzzes, then titters, then various wags shout out Superman-related lines: “Faster than a speeding bullet!” etc. It breaks the mood, and Fred Zinnemann, the director, turns toward the projection booth and makes a scissors motion. Most of Reeves’ work winds up on the cutting-room floor.

You’re this, the world was telling Reeves, and only this. And then he wasn’t even that. The show wasn’t picked up for a seventh season, a directing deal fell through, and Reeves was left to scramble. Would he take a role in professional wrestling? We watch 8mm footage of him trying out moves but betrayed by body and age. He leaves Toni for a younger woman, Leonore Lemmon (Robin Tunney)—who, ironically, has the same “L.L.” initials as all of Superman’s girlfriends—and suffers recriminations from both women. Leonore thought he was a star but he’s fallen. Toni stomps on him there.

“Have you seen yourself, George?” Toni says to him. “Your face is going. Here. Your eyes, your hair, your stomach. You think no one notices?”

Then she gets mean:

Toni: You want publicity? You’ll get it. I’ll say you’re a red. And a faggot. A lush. Nobody can call that a lie.
Reeves (angry): You know what? You never helped me. You never helped me. You could’ve talked to Eddie. You could’ve gotten me something but you didn’t! Because you liked me where I was in a fucking red suit! You liked that! Well, that’s not who I am, you understand? Goddamn you.
Toni (sweetly): But George, that’s all you were good for. 10 year-olds and shut-ins. That was the best you were ever going to be. I knew that. Why didn’t you?

Sure, Diane Lane is stellar, but has Ben Affleck ever been this good? At this post-Bennifer point in his career he was coming off a string of laughable movies, including “Gigli,” “Surviving Christmas,” and his own turn as a superhero, “Daredevil.” He was trapped, all of which was good prep for playing Reeves, and he brings a matter-of-fact pathos to the character. The irony of Reeves’ existence weighs upon his mighty shoulders. He plays the world’s most powerful man even though he has no power. The final irony, about the speeding bullet, comes too late.

If Superman is wish fulfillment for kids then George Reeves is identification for adults. Most of us never wind up where we want to be. Most of us assume roles (pharmacist, plumber, real estate agent) that define us and trap us. Then even that role, through age, circumstance, and technological advances, is taken away from us, too.

Not truth, not justice

The Reeves half of “Hollywoodland” is powerful and reverberates long after the movie is over. The other half, the fictional half, is boilerplate. Simo is not a nice man, but through his research into Reeves’ life and death he comes to an epiphany. He takes the lesson of Reeves’ life and applies it to his own. But what’s the lesson? Be happy where you are? Don’t lie so much? Don’t string your clients along? Don’t show up drunk at your kid’s school?

That’s part of the problem with the movie. Sure, Simo scrambles after his next best chance. But he scrambles because he has to make a living. So where does the epiphany leave him? Not scrambling? Going into a different line of work?

“Hollywoodland,” written by Paul Bernbaum and directed by Allen Coulter, was going to be called “Truth, Justice and the American Way” until Warner Bros., putting out their own Superman movie that year, intervened. But elements of the original title are still in the movie. To corral Reeves’ mother as a client, Simo taps the lurid headline about her son’s suicide and says, “You need a headline this big … only with the truth.” Except he doesn’t believe it’s the truth. When another client, who has long suspected his wife of adultery, kills her with three bullets to the head, heart and groin, he tells Simo, “I hope you’ve learned the meaning of justice.” Except it’s not justice.

So not truth and not justice. Just the American way.