Why is FDR Hanging with the Three Stooges? Everything You Didn't Want to Know About Screen Portrayals of U.S. Presidents, and Didn't Ask 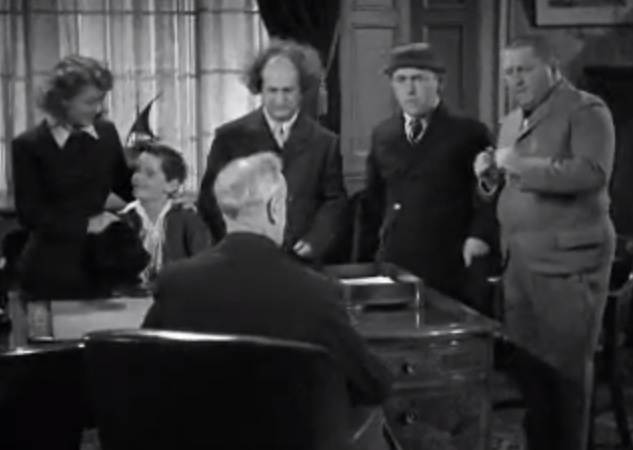 FDR:á“As for you gentlemen, I find it possible to extend to you executive clemency.”á
Curly:á“No, please not that.”

For Washington and Lincoln it was a silent short (“Washington Under the British Flag” and “His First Commission,” respectively). For Grover Cleveland, it was a James Cagney/Humphrey Bogart western (“The Oklahoma Kid”). JFK got an episode of a forgotten TV show, “Navy Log,” LBJ got “Batman: The Movie,” and FDR, believe it or not, got the Three Stooges.

These are the first moments our presidents have been portrayed on screen. Per IMDb.

Some surprising revelations. Herbert Hoover (1929-33) was never portrayed on screen until 1979's “Backstairs at the White House,” a mini-series attempting to combine “Upstairs Downstairs” with “Roots.” Then there's James Buchanan (1957-61), who has been portrayed only once, voicework by David Gergen, in the 2000 PBS documentary “The American President.” At least he had John Updike watching his back.

More recent presidents, of course, are first spoofed on television, generally “Saturday Night Live,” which has given us our first screen portraits, or caricatures, of Gerald Ford, Jimmy Carter, Ronald Reagan, Bill Clinton and George W. Bush. The British series “Spitting Image” beat them to George H.W. Bush, while “The 1/2 News Hour” beat them to Barack Obama.

Speaking of the Bushes: IMDb.com needs to fix its algorithms, since it includes obvious H.W. characters (a 1990 “Golden Girls” episode, voiced by Harry Shearer, for example) under W.'s character page. The site also includes the “Richard Nixon” thug in Godard's “Made in U.S.A.” on Nixon's character page. I‘ve tried to adjust the numbers accordingly but take these numbers with a grain of salt. Treat them, in other words, as you would campaign promises.

Oh yes, and in case you were wondering, Lincoln wins. By a longshot.

Here are our 44 presidents in order of first cinematic appearance:

á And here they are as ranked by how often they’ve been portrayed on screen. Interestingly, W. beats FDR. But U.S. Grant is ahead of Teddy Roosevelt? I guess the Civil War helps: