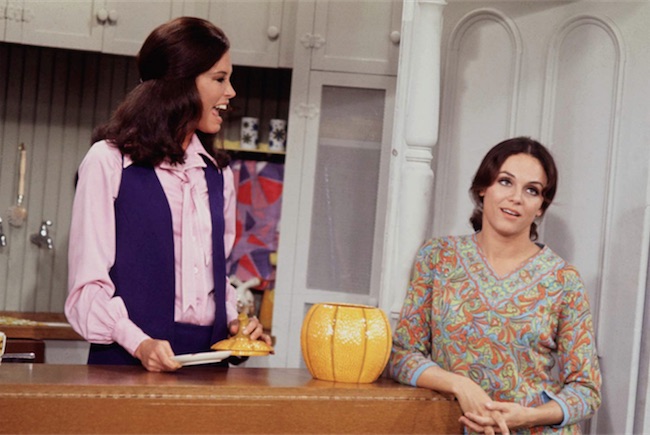 In Minneapolis, where it's cold, and she figured she'd keep better.

Mary attracted the brassy ones, didn't she? Rhoda at home and Lou at work. Both were my favorites. Then Murray, the sardonic writer. At the bottom of the list was Phyllis, Cloris Leachman, who was nails on a chalkboard to me. I guess she was supposed to be. I remember reading that Leachman had been in the Miss America competition and did a mental doubletake: Wait, so she's supposed to be pretty, too? And not Rhoda? What world am I living in?

Valerie Harper had a helluva ‘70s. Emmy for best supporting actress in ’71, ‘72 and ’73; Emmy for lead actress in ‘75 now that she was back in Manhattan and running her own show. Her marriage to Joe was must-see TV before anyone coined that phrase. Carlton the Doorman was one of the decade’s standout characters even though he was unseen. Or because of it.

But did Rhoda ever find her rhythm in New York? Maybe they thought like I thought—she's too pretty to be the non-pretty one—so they set up a dynamic where she played Mary to Julie Kavner's Brenda. But beyond that? What was her job? Was it graphic design? Mary's stuff is indelible at the WJM newsroom, Rhoda's not. What do I remember about “Rhoda”? I remember Rhoda/Joe/Brenda trying to get through to Carlton the Doorman via intercom, and him, breaking into the middle of the sentence with an inebriated, “This is Carlton your doorman.”  I remember Phyllis was supposed to pick her up before the wedding, didn‘t, and so she had to run around Manhattan in her wedding dress trying to flag a cab. I remember Rhoda seeing her diminuitive mother from behind, waiting for a bus or something after an argument, and Rhoda welling up and saying something like “She can break your heart with her back” ... but no, that was actually on “The Mary Tyler Moore Show” before the big move. I guess I only watched so much of “Rhoda.” Maybe just up to the wedding. Once she and Joe got together, where was the drama? And once she and Joe split? Nah. My own parents had just split. That wasn’t must-see TV for me. That hurt too much. That was too ‘70s.

She wasn’t Jewish! How about that? Rhoda, yes, but not Valerie, according to the Times obit. She was European and French-Canadian. Rhoda still remains an early gateway to Jewish culture for me.

She was married to Richard Schaal! I never knew that, either. There‘s a photo on IMDb of Harper mugging with other Second City stalwarts and it’s everything you want in ‘70s sitcoms. There’s Hamilton Camp, who played a diminuitive date of Mary's in an early episode, and Paul Sand, who got his own show, “Friends and Lovers,” which didn't last, and Melinda Dillon, famously exasperated/distraught but still sexy mom in “Close Encounters” and “A Christmas Story.” And good god, Richard Libertini, tall and long-faced, who was on everything, and kept going, and who died in 2016. And then Schaal, who was also in everything: “MTM” (five episodes), “Bob Newhart” (three) and “Rhoda” (three) and “Phyllis” (all of them, a regular), as well as spots on “Partridge Family” and “Fish.” He died in 2014. Of the five, only Dillon and Sand are still with us.

Rhoda came on when TV and sitcoms were trending smart and relevant, and she went off the air when they were trending toward the wish-fulfillment fantasy of the Fonz or the jiggle TV of “Three's Company” and “Charlie's Angels.” In a way Rhoda was replaced by the real Jewish thing, Laverne from “Laverne & Shirley.” Those two were a kind of working class Mary and Rhoda. Just not funny. Not close. The show didn't have the chops. Sitcoms almost died in the ‘80s, remember? God, look at the top-rated shows of the 1975-76 season: five of the top 10 shows are women-helmed, including “Rhoda,” “Phyllis,” and “Maude.” Compare it to the mid-Reagan years. Suddenly we’re just watching hourlong soaps about rich people. We used to watch us and now we watch them. And vote for them.

For Harper, after “Rhoda,” it was just TV movies I never watched. I think I didn't see Valerie again until “Blame It On Rio,” a randy mid-80s comedy in which the hot daughter of a friend of Michael Caine's makes a play for him. Valerie played Caine's wife. So it goes.

I heard the news of her passing on Twitter from Ed Asner, who offered up this perfect tribute.

A beautiful woman, a wonderful actress, a great friend and with balls bigger than mine. Her brilliance burst through and shined its light upon all of us. Goodnight beautiful. I’ll see you soon. pic.twitter.com/FicADkSAzS