The Biggest Hurt of All: The MLB Network’s Countdown of the Greatest Players Never to Appear in the World Series

After a long week of work and illness, I plopped onto the couch Friday night to watch a bit of the MLB Network to cheer myself up. Usually works. One of their “Prime 9” shows was on, this one about the best players to never play in the World Series, and so, despite the awful MLB Network commercials, I stuck around to the end. I wanted to see if Ken Griffey, Jr. was their No. 1. As he was mine.

All of which is a little sadder than I wanted for a Friday night after a long week of work and illness.

But then Prime 9 did something I’d never seen before. They went beyond the list to provide editorial comment on one team. No, not the White Sox or the Cubs. My Mariners. My 1990s Mariners.

Here’s what they said:

Griffey is just one reason why it’s hard to believe those Mariners teams of the late 1990s never reached a World Series. For beyond Junior, who was arguably the best player in baseball at that time, they also had the game’s premiere designated hitter. (Cue footage and audio from Dave Niehaus: “Edgar Martinez with another home run! Unbelievable!”)

There was also a precocious talent emerging as one of the game’s superstar shortstops. (Cue Niehaus: “That’s going to be...CAUGHT BY RODRIGUEZ! An amazing catch by Alex!”)

And on the mound, Seattle had the Big Unit, one of the most dominant and successful pitchers baseball has ever seen. (Cue announcer: How good is this guy? One of the best.”)

There was a wealth of riches in Seattle in those years. But there was one jewel missing from this gem of a team: A ring.

And that’s our Prime 9. What’s yours?

Well, that is my Prime 9. I'd already written about it back in June 2010 when Ken Griffey, Jr. retired from baseball:

I wasn't there at the beginning but I was there at the end. Not Junior's last game on Memorial Day, but the first Major League Baseball game without Junior on a roster. As he drove home to Florida, M's management played the tribute video they'd probably had in the can for 14 months and the grounds crew created a “24” in the dirt out by second base, and me and my friend Jim watched this team, once mighty, once a potential dynasty, now as weak and characterless as the day he arrived to save them, eke out a win in extra innings. But there was nothing electric about it. There was no future in it. The M's are still a backwards-looking franchise that doesn't even have a definitive victory to look back on. In the 1990s they had three of the greatest players ever to play on the same team, Junior, A-Rod and Randy, and they couldn't get past the ALCS. Two of those players now have rings from other franchises. The last will go down as the greatest player in baseball history never to be in a World Series.

But any baseball fan in Seattle could tell you the same. We know. The rest of the country may be waking up to this just now, but we’ve known since 1998 or ’99. We even know who to blame. From the same post:

Moreover, Junior’s team, the lowly Mariners, who stormed ahead in '95, and seemed, in '96 and early '97, on the verge of a dynasty, was already being undone by awful relief pitching and awfuler moves. Omar Vizquel for Felix Fermin. Tino Martinez and Jeff Nelson for Sterling Hitchcock and Russ Davis. In July '97, with Norm Charlton and Bobby Ayala forever blowing ballgames, M's GM Woody Woodward went out and got three relief pitchers: Bad (Mike Timlin), Badder (Paul Spoljarec) and Baddest (Heathcliff Slocumb). To get them he gave up what felt like the future: another Jr. (Jose Cruz), catcher Jason Veritek and pitcher Derek Lowe. It didn't even work short-term. The M's got killed by Baltimore in the '97 ALDS, three games to one, and from the right-field stands I watched Junior flub a chance at a great play. The ball went off his glove. I'd never seen that before. I thought: “What is that? He normally gets that.” The next season was worse. We lost Randy Johnson in July, and while Junior was blasting homeruns it wasn't at the pace of the two testeronic monstrosities, Mark McGwire and Sammy Sosa, who ruled the summer. Junior was a diminished figure in the steroids era. The M's were a diminished team in the Yankees era.

I still contend that if the M’s hadn’t made that ’95 trade to the Yankees, if they’d just been smart about their trades in ’97, if they’d just spent a little more for relief, the great baseball dynasty of the late 1990s wouldn’t have been the effin' New York Yankees. It would’ve been my Seattle Mariners.

In Ken Burns’ “Baseball” documentary, talking head Billy Crystal says that the Yankees defeat to the Pittsburgh Pirates in the 1960 World Series still hurts. But Billy Crystal doesn’t know from hurt. The Big Hurt was No. 3 on MLB’s list but the biggest hurt of all was there at No. 1. It’s a hurt that hasn’t healed in Seattle. It probably never will. 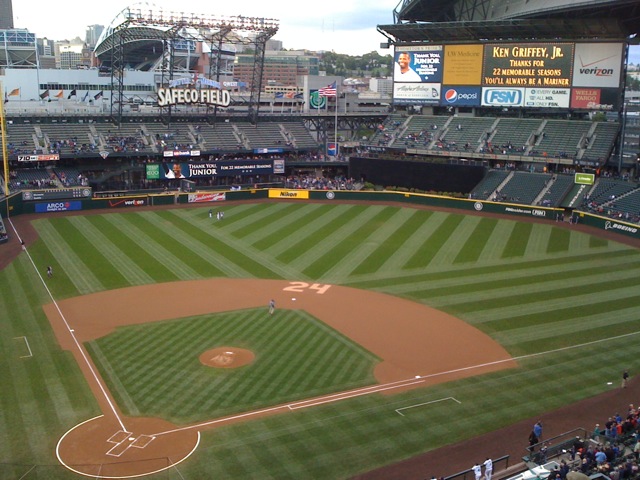 Safeco Field, the night after the day Ken Griffey, Jr. retired from baseball. (Click here for more posts about the Seattle Mariners.)