After nearly 75 years of ignoring the topic, two films about the Rape of Nanjing, one Chinese and one German, were released in 2009. Both suffer the same melodramatic impulse. It’s not enough to show atrocity, we have to show uplift. The music has to well. Good people have to march onward even as what they leave behind is so unspeakable as to shatter faith in God.

The German film, “John Rabe,” focuses, no surprise, on the German, John Rabe (Ulrich Tukur of “Seraphine”), a member of the National Socialist Party (NaSi or Nazi), who, at the start, has spent years in Nanjing building a dam for the German company Siemens. It’s his pride and joy. 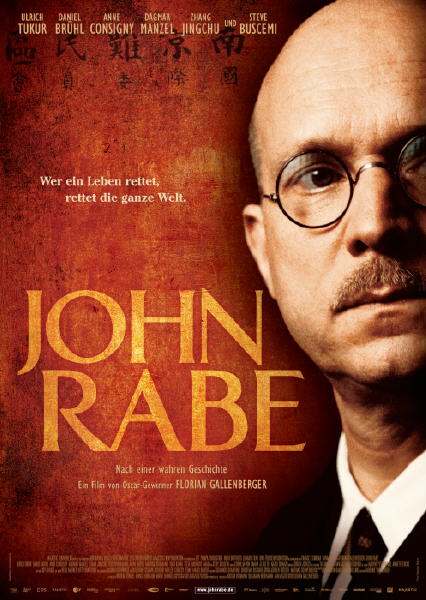 But it’s December 1937. The Japanese have attacked China and are approaching Nanjing (literally: southern capital), and anyway Rabe’s been recalled by Siemens to Germany. He and his wife are to leave in two days.

Rabe is not exactly a warm figure here. He calls the Chinese “good for nothing” and “children,” he has made no effort to learn their language, and he assumes he’s safe from the Japanese. “After all, they are allies of the Reich,” he says. When Japanese Zeros begin to bomb his compound, he unfurls a large Nazi flag and has everyone hide beneath it. That night he writes in his diary: “The Japanese are indeed good allies. They hold their fire as soon as they see the flag. Very honorable.”

This is one of my favorite parts of the movie. It’s so easy, in historical dramas, to make protagonists more cognizant of future events than their peers, and most filmmakers can’t resist the impulse (see: Michael Corleone in “Godfather Part II”), so it’s nice when they do. The present’s messy and uncertain. We know we’re watching a movie about an unimaginable holocaust, but unimaginable holocausts are unimaginable. No one thinks they’ll live through one today, tomorrow, or next week.

Unfortunately, we begin to get intimations of something warmer about Rabe. He’s certainly a nicer man than the Siemens exec, Werner Fleiss (Mathias Herrmann), who’s been sent to replace him. Fleiss berates Rabe for allowing a portrait of Hitler to be covered up, and for not flying his huge Nazi flag—literally and figuratively. Then he lowers the boom. He’s not just replacing Rabe: Siemens is shutting down the project. All Rabe’s hard work—gone. “The dam,” Rabe tells his wife, “would’ve been my legacy.”

To which we think: Ah, but he’ll have a different legacy.

To which we think: Ah, but soon he WILL be a hero to the Chinese people.

As the Japanese move into Nanjing, an international contingent, including Valérie Dupres (Anne Consigny of “The Diving Bell and the Butterfly”), a woman with whom Rabe has a subtle flirtation, attempts to establish a “Safety Zone” for both themselves and their Chinese workers. Against Rabe’s wishes, he’s made its president. The music wells up heroically. A day later, Rabe attempts to flee. At least that’s what the others fear, since they see his name and the name of his wife on the passenger list of the last ship leaving Nanjing. They rush down to the dock. There’s tension. Then they see him and his wife making their way through the crowd. It’s true! He’s leaving!

Except there is no tension. We know he’s not leaving. Otherwise we wouldn’t be watching the movie we’re watching.

His wife gets on the ship, yes, but he stays behind, absurdly holding a bird cage, and standing on the top step of the elevated stairs as the ship pulls away. A moment later, Japanese Zeros strafe the ship. He screams her name. For some reason, in this crowded port, no one is near him. He’s all alone watching this attack. Because they couldn’t afford extras? Because it suggests how alone he is now? It’s China, kids. No one is ever alone.

First he loses his legacy, then he loses his wife. This is a big moment in the film. How does he pick himself up? We don’t know. He just does. You could argue he’s on a suicide mission. Medical supplies, including insulin, are low or nonexistent in the Safety Zone, but he tells no one he has diabetes. He simply channels his German efficiency into helping the Chinese rather than Siemens. Instead of building a system to hold back water, he’s building a system to hold back the Japanese.

The horrors get worse. Executions of Chinese men are rampant. Chinese girls cut their hair to seem like boys to prevent rape. Nanjing 1937 is, in fact, one of the true horrors of he modern age, and we should get a sense of these few foreigners propping up the last bit of sane ground in an insane world. But we don’t. Instead we get subplots. Rabe and Wilson bond over drink. Dupres confesses to Rabe she’s housing a whole platoon of Chinese soldiers in a secret room. Rabe and Wilson and Dr. Georg Rosen (Daniel Bruhl of “Inglourious Basterds”) argue over protocol. There are even intimations of romance between Rosen and a Chinese girl. He leaves her a dress. She puts it on. They talk on a couch. Seriously? We need a love story? Are we that pathetic?

There’s one great scene. While Rabe and the others are hat-in-hand at the Japanese embassy, Rabe’s driver, Chang (Ming Li), walking around his car and smoking, is confronted by an angry Japanese guard, who demands, in Japanese, that he stay in his car. But Chang doesn’t speak Japanese. When Rabe leaves the compound, Chang is nowhere to be seen. He searches for him, yells his name, finds him in a fenced-in area with other Chinese who are in the process of being decapitated. It’s a contest sponsored by a Japanese newspaper: What honorable Japanese soldier can decapitate the most Chinese? Rabe tries to get them to stop, to rescue his driver, but Chang is decapitated before his eyes. A Japanese official later says the driver wasn’t following the rules. “He didn’t stay in the car?” Rabe answers. “His head was cut off!” To compensate him for his loss, Rabe is allowed to choose 20 Chinese to take with him, but this is a Faustian bargain. He has to decide who lives and dies. He does it with German efficiency and something like horror in his eyes.

This scene is a rarity, though. Too often, writer/director Florian Gallenberger gives over to melodrama. Near the end, the Japanese want to clear out the Safety Zone and remove evidence of their atrocities before an international contingent arrives, but Rabe and the others stand in the way; they stand in front of more Chinese who are about to be killed. The Japanese begin to go through with the executions anyway: “Ready... aim...” Then the deus ex machina: the sound of the ship arriving with the international contingency. Rabe wins but the movie loses. God, ex machina or otherwise, should not show up here.

The ending is even worse. Rabe is forced to step down as president of the Safety Zone and return to Germany, and, as he makes his way through a throng of grateful Chinese, they chant his name and shout good-bye: “Tzi jien! Tzi jien!” At the other side of this throng, just outside Nanjing, a walled city, stands his wife, still alive, and he rushes to greet her, and they embrace, and a cheer goes up from the Chinese throng. Yay! The German guy is back with his wife! Yay! We’re all about to die! Yay!

How much more effective, how truer, if, after all the good he’d done, he’d left unceremoniously, as alone as he’d been at the port. What group of people recognizes individual good as it’s being done? Don’t we need historians to piece things together? Hell, I’m even cynical about that proposition.

And cheering him? Wouldn’t the remaining Chinese have clawed at him to get him to stay? Or to take them along? Or to take their babies with him so they wouldn’t be skewered by the Japanese?

Instead the Chinese act as audience for this German couple in a story that is about the atrocities that happened to them.

The Rape of Nanjing is a horrific story worth telling. We just keep telling it wrong.