I actually know Forks, Wash., or towns like Forks, Wash., since Patricia’s mom used to live in Joyce, Wash., further north and east on the Olympic peninsula. We used to go there every August for the Blackberry Festival. Patricia’s mom organized the local art show at The Grange, Patricia’s brother, Alex, a marine biologist from Port Townsend, was sometime-judge in the blackberry pie contest, and Patricia herself sometimes helped out at the cotton candy stand. The highlight was always a noon-time parade down main street, or the only street, Agate Beach Road, filled with vintage '30s cars and vintage '30s men (VOFWs) and usually something high-schooly. We watched near the Joyce General Store, which sold candy I thought ceased to exist in 1968. There were no vampires. 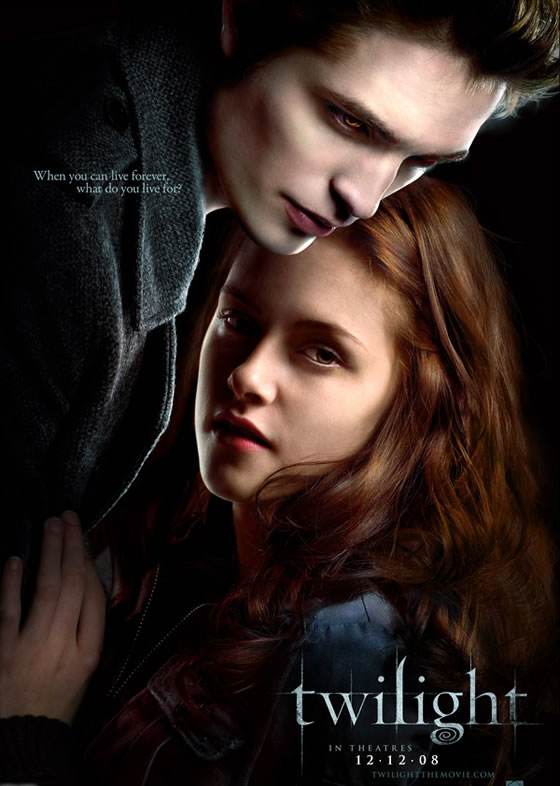 But it’s a brilliant conceit that a vampire clan would hang out on the Olympic peninsula to avoid the sun—which, in this universe, doesn’t destroy them but merely turns their skin all sparkly. The peninsula also works as a hangout for the Cullens because, well, it’s isolated, there’s game in the forests, and it’s already full of weirdos. The peninsula’s the place Washingtonians go when Walla Walla gets too crowded.

Bella (Kristen Stewart), our heroine, arrives in Forks from Phoenix, Ariz., cactus in hand, in March, because her mother and her new husband, Phil, are heading to Florida for spring training. Phil, according to the mother, is “a minor league baseball player.” Since Bella is 16 or 17, her mother would have to be, what, 32-35 at the youngest? Which means she’s either a cougar (to go with the Native American wolf packs), or Phil needs a new job. Generally if you don’t make the bigs by 30 you don’t hang around.

For a new girl in town, Bella does surprisingly well. In fact, she has to do little. Her father gives her a truck, the kids flock to her, she’s popular just by sitting there and, um, not knowing what to say or, um, maybe not caring what to say. The other kids fill her in on the Cullens, who seem good-looking and aloof, like Duran Duran in 1983, and she and Edward Cullen (Robert Pattinson) exchanged slow-motion, smoldering looks, like they’re in a “Hungry Like the Wolf” video. She also winds up sitting next to him in biology class. Biology. At first he ignores her, can’t seem to stand the smell of her, but then he’s charming and curious, and before you know it they’re in love, and before you know it she figures out that he, and all of the Cullens, are vampires. It takes about a week? Doesn’t say much for the rest of the folks in Forks, does it? Or do they already know and accept it as part of the usual peninsula weirdness? “Cassandra Starlight here used to be named Peggy Jones until she hit 54 and decided to change it, Zeke’s got a bumper sticker on his pickup saying ‘My real president is Charlton Heston,’ which he put on during the Bush years, and Dr. Cullen and his family? Well, they’re vampires. But kindly folk.”

It's been much-written, but, yes, Edward is the dream boyfriend for teenaged girls who are curious about but afraid of sex: He and Bella can’t have it because he might lose control. He might literally want to tear her apart. So romantic! There’s also a “gift of the magi” quality to their relationship: She loves him enough to become a vampire, he loves her too much to make her one, and so there they are, staring into each other’s eyes, longing. If anticipation is greater than consumption (see: “The Tao of Pooh”), then theirs is one great relationship. But it’s still a teenaged relationship, and, even though he’s a 100-year-old teenager (he became a vampire during the influenza outbreak of 1918), it’s full of awkward, teenaged conversations. Let me speak for the adults in the audience: Thank you for those moments when the camera pulls back, the music wells, and we just see them talking. It's lazy writing, sure, but still appreciated.

What else about Edward appeals to teenage girls? Basically he’s James Dean (the brooding, handsome, tortured loner) but superfast and superstrong and with the ability to read everyone’s mind but hers. So she’s as much mystery to him as he is to her. She’s mysterious and he’s curious. One wonders if that’s why he loves her in the first place. If true, it seems like an unromantic reason to me. I only love you because I don’t know you.

Their relationship also allows her, for all her spirit, to be the damsel in distress. No ass-kicking girl here. The good and bad vampires, the wolf packs, could tear her apart before she could blink so she gets to be rescued without guilt. Feminists, of course, are up in arms, but is this the secret desire of girls, as rescuing (particularly if you’re superstrong) is the secret desire of boys? This is not to discount lines like Edward’s: “I don’t have the strength to stay away from you anymore.” I know that has its appeal, too.

The movie does a good job with the locale, by the way. The kids go to La Push and Port Angeles, they reference Kitsap County sheriffs, and the men drink Rainier beer and watch Mariners games. There's a lot of cloud-cover and drizzle. It’s all very Pacific Northwesterny.

“Twilight” isn’t as horrible as I thought it’d be and it’s kind of fun to watch with a girl, or even a woman, to see what she likes about it. That should be its appeal for boys. Most of us are like Edward—we have no clue what you’re thinking—but the big question is if “Twilight,” by giving us that clue, is helpful, or just slowly, vaguely horrific.