“The Karate Kid” practices what it preaches.

Not the karate, since it’s set in China and that’s kung fu. Nor, really, the idea of using kung fu to avoid fights, since we didn’t buy our tickets to watch someone not fight, thank you. We’re moviegoers and we want our wish fulfillment. We’re Old Testament and we want our just desserts.

No, here’s what it preaches. At one point, Mei Ying (Han Wenwen), a young Chinese violinist who wants to get into the prestigious Beijing Academy of Music, and who is the love interest/crush of our main character, Dre Parker (Jaden Smith), is told by her teacher that she’s playing the music too fast. She needs to slow down and appreciate the pauses. 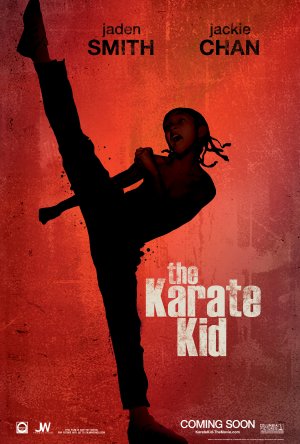 That’s what the film does. Most summer movies rush to get us onto the roller coaster, then zips us around for two hours. “Kid” takes its time.

It begins in Detroit with a not-bad visual shorthand. Dre is in an empty room staring at the pencil hash marks on the wall indicating how he’s grown over the years. In this way his life is tracked: “Started kindergarten”; “Lost tooth” “First homerun”; “9th birthday”; “Daddy died.” Then his mother (Taraji P. Henson) calls to him and he pencils in the final one: “Moved to China.”

(Caveat: Of course this shorthand only works if you don’t think about it for more than two seconds. “Daddy died, honey. Let’s see how tall you are!”)

On their first day in Beijing, fighting the jetlag, Dre wanders the neighborhood and meets 1) a blonde-haired American kid, Harry (Luke Carberry), who speaks pretty good Mandarin, and who (intentionally?) reminds us of the gang of blonde-haired bullies from the first “Karate Kid”; 2) Mei Ying, who sits on a park bench and smiles at Dre’s various shenanigans, which include sucking at basketball, sucking at ping pong, but busting some good dance moves; and 3) the new gang of bullies, Chinese now, and led by Cheng (a stunning Wang Zhenwei), who may like Mei Ying, may dislike foreigners, or may just be a jerk. But he picks a fight with Dre, who, good for him, stands his ground. Then Dre gets his ass kicked. Harry tries to intervene, saying, “Ta gang li de. Ta bu jrdao ni shr shei,” or, in English, “He just got here; he doesn’t know who you are.” That’s a pretty scary sentiment. One wonders how long the 12-year-old Cheng has been bullying this neighborhood.

How much does “Karate Kid” appreciate the pauses? It makes us wait an hour before we see these bullies get their first comeuppance—when the maintenance man in Dre’s apartment building, Mr. Han (Jackie Chan), prevents Cheng and his buddies from putting Dre into the hospital. He does it in the usual Jackie Chan manner: by using his opponents as props; by using his opponents’ need to fight to defeat them. “When fighting angry blind men,” he says later, “best to just stay out of the way.”

Before that moment, we’re mostly getting to know Dre as he gets to know Beijing. He visits the Forbidden City. His mother thinks the hot water in their apartment doesn’t work, but Mr. Han informs him hot water in China works with a switch: turn it on, wait a half hour, take your shower, turn it off. When Dre tells him the U.S. doesn’t have such a switch, he stares at him, then says, “Get switch. Save planet.”

We’re also getting to know Jaden Smith. It takes a lot for a possibly nepotistic 12-year-old to star in his own film, but he pulls it off. Often he has looks, unconscious looks, that remind us of his father: that slight head shake, for example, while growing increasingly fed-up and angry. What he can’t pull off, and what his father could pull off effortlessly, is that empty bragging thing: that feigning front that lets the audience know the braggart’s got nothing—and yet somehow makes us like the braggart. Jaden tries it that first day at the park, with the basketball and the ping pong, and the humor falls flat.

Jaden is at his best, I believe, when he reminds me, not of his father, but of my nephew, now 9 years old: that almost trapped, desperate look of being unable to explain to grown-ups the injustice of the world. That naked vulnerability. “I hate it here!” he tells his mom. “I want to go home!” When tears well up in his eyes and slide down his cheeks, it’s heartbreaking stuff. Some critics have complained that Jaden, 11 going on 12 now, 10 going on 11 when the movie was filmed, is too young to play the role Ralph Macchio originated at 22 or 23, but the advantage to youth is vulnerability. Dre isn’t on the verge of manhood. He is just a kid.

Despite that, and despite the switch to China and kung fu, this remake mostly follows the path of the original. Bullies gather. Mentor emerges. Mentor says “No such thing as bad students, only bad teacher.” Then he meets the bad teacher, Mr. Li, (Yu Rongguang), who decorates his school with huge, framed photos of himself in aviator glasses, and who physically beats students who dare show mercy to other students. Mr. Han looks both startled and, yes, scared that there are such teachers in the world, so he agrees to teach Dre what he calls “real kung fu.” In the 1980s version, it was wax on/wax off. Here it’s jacket on/jacket on. Same idea. Repetitive task leads to the unconscious physical movements that act as the doorway to the martial art.

Jackie Chan fans, or at least this Jackie Chan fan, has been waiting for years to see him in this kind of role. He became a star in Asia in the 1970s playing the ne’er-do-well student to a crazy or stern taskmaster, often played by Siu Tien Yuen, and now he gets to play that stern taskmaster. He does it well. He’s both stern and concerned. He is stern because he is concerned. He’s teaching not just a one-time thing but a way of life. “Everything is kung fu,” he says. On the window of a train to the Chinese countryside, during a pilgrimage to a Chinese temple, he draws the Chinese character for “chi,” and explains that it means: the eternal essence that flows through life. Dre translates this into pop cultural terms. Chi equals the Force. “You’re Yoda,” he says, “and I’m like a Jedi.” Great line.

This temple is ridiculously beautiful, and a martial arts master mesmerizes a cobra while balancing atop one of the temple’s ornate wings, and later Mr. Han and Dre practice on the Great Wall of China with no tourists or officials in sight (nice gig if you can get it), but despite all of this fanciful stuff the movie works to stay grounded. Most of the training is done in Mr. Han’s cluttered yard, or on a rooftop between drying laundry, and the emphasis keeps returning to the basics: focus, concentration, practice—all of the things you need to succeed in any discipline. The emphasis of the movie, meanwhile, keeps returning to the basics of storytelling: the humanity of its two main characters. When Dre is finally able to punch Mr. Han with force, he looks scared. When Mr. Han’s tragic past is revealed, the movie, rather than being derailed, deepens because of the honesty of Dre’s response. When Dre is injured in the tournament and wants to go back out for the final round, and Mr. Han asks him why, Dre says, “Because I’m still scared.” Another great line. Another great lesson.

The final point of the final round of the tournament is over the top, literally over the top, but the comeuppance of the bad teacher is quiet and dignified and devastating. I walked in hoping “Karate Kid” would be an OK movie; I walked out thinking it was much, much better. It’s wish fulfillment, obviously, but it’s inner-directed wish fulfillment. The point isn’t to decimate your enemies but to better yourself and hope some part of the world follows.