Did anyone watch Ken Burns' “Prohibiton” doc on PBS last week? It's good stuff. I like the overview of the types of movements we had, and have, in this country: what inspires them, what drives them, what ultimately causes them to succeed. You could argue that Prohibition succeeded, or at least was passed into law, for three reasons: 1) the creation of the U.S. income tax in the 1910s (meaning the U.S. government no longer needed to rely on taxes on the sale of liquor); 2) anti-German sentiment during and after WWI (since the big breweries were all German-American); and 3) the usual feelings about human perfectability. Plus misconceptions about what the Volstead Act entailed. Many didn't think prohibition would apply to beer, for example.

There's a good section on Seattle, too, which I never knew was a bootlegging hub. But it makes sense. There's proximity to Canada, with all its booze, and the islands and coves of Puget Sound, with all its places to hide.

There's good stuff on Assistant Attorney General Mabel Walker Willebrandt, the most famous woman outside of Hollywood in the 1920s, and the rise and fall of George Remus, perhaps the biggest bootlegger in the country, who was done in by, of all things, a dame. Plus Al Capone.

But I was most amused by this shot. You could argue it's merely a generic shot of New York City in the 1920s. But there's no way that Ken Burns, official documentarian of Major League Baseball, doesn't know the true meaning of “No No Nanette.” 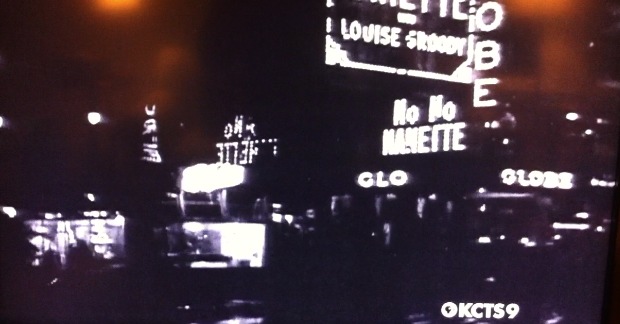