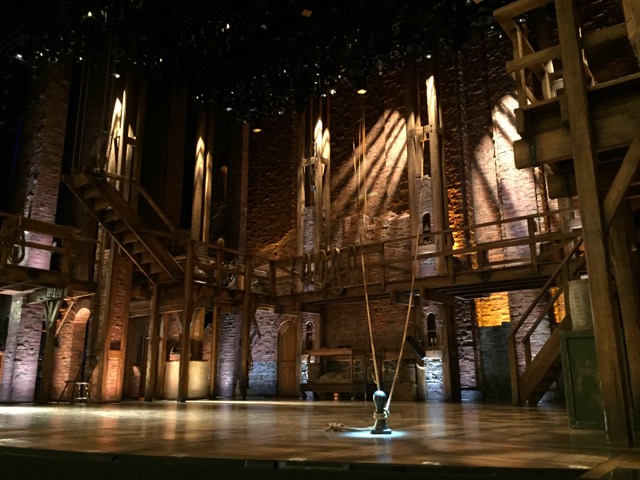 It was January 20, 2016, my birthday, and I was checking out social media, as we do, when I was distracted by a trending headline about director Spike Lee and #OscarsSoWhite. I kind of rolled my eyes. OK, what did he say now? Turns out Spike's thoughts on the controversy were similar to mine—that the lack of black artists up for awards is less an Academy problem than an industry problem. The roles needed to be there in the first place for the Academy to honor them. “We need to be in the room where it happens,” he said, and the writer helpfully added that this was an allusion to the new hit musical “Hamilton,” then even more helpfully included a link to a cast member singing that song on YouTube.

Me: Oh right. That hip-hop musical about the first treasury secretary, with people of color playing the founding fathers. Sounds dreadful.

But I clicked on the link.

First viewing: “Hey, this is pretty good.” Second viewing: “Holy crap, this is good.” I searched for more on “Hamilton,” then came across a 2009 White House video of some guy rapping about Hamilton and was blown away again. That guy, it turned out, was Lin-Manuel Miranda, who created it all. Did iTunes have the Broadway soundtrack? It did! I listened to several songs before downloading the entire thing as a birthday present to myself. I figured, while I probably wouldn't listen to all the songs, there was enough there to make it at least a little bit worthwhile.

Well, I did listen to all of the songs. Over and over again. Ask my wife. For six months it was about all I listened to. I listened to it like I was running out of time. My world would never be the same.

I searched for tickets to the Broadway show, too, but they didn't have anything for like a year. I probably should've tried harder. Then Miranda and other members of the original cast left the show in July. That door was closed now; it would never be open again.

But two weekends ago, in Chicago, I finally got to see the show.

My sister got tickets for her family and my wife made sure one of those was for me. So even though I'd just spent two and a half weeks in Europe, I packed up again and headed to Chicago.

But I was blown away. After the show, my sister reposted on social media Joe Posnanski's great essay about seeing “Hamilton” on Broadway last year with his daughter, and it includes this graf:

The thing about seeing Hamilton RIGHT NOW at its peak moment is that even before it begins, the entire theater is filled with wonder. Every single person would rather be here than anywhere else in the world. As a sportswriter, I often feel that sort of energy at the biggest events, at the Masters or the Super Bowl or the Olympics, but it's even more pronounced in this theater. People look at each other with the same wide-eyed expression: “Can you believe we're here?”

That was the feeling in Chicago. The crowd was buzzing, smiling “I can't believe I'm here” smiles, and taking turns taking photos near the stage. As the house lights dimmed and the opening chords to the opening number played (DUN duh-nuh-nuh-nuh DUN DUN), unsuppressed squeals of delight were heard. And when Daniel Breaker as Burr asks “What's your name, man?” and Miguel Cervantes as Hamilton responds, “Alexander Hamilton,” the crowd burst into applause.

The talent on the stage was amazing. The dancers rocked. Alexander Gemignani took the familiar King George songs and made them funny again. He just owned the stage. He brought the house down multiple times and viewed us all with the disdain of an 18th century half-mad monarch. Loved Chris De'Sean Lee as Lafayette (less his Jefferson, which felt over-the-top), and Ari Afsar as Eliza. Meanwhile, the actress playing Angelica, Aubin Wise, has a combination of high cheekbones and dimples that seems decidedly unfair to the rest of us. You should get one or the other, not both. Plus she has the pipes. Get this: she was the understudy.

But I was particularly impressed by Breaker as Burr. Right from the start, right from the “Aaron Burr, Sir” song, you not only heard him singing but saw him acting. His reactions to this pestering kid seemed just right: putting Hamilton at a distance, then being won over by him (kinda sorta), then the rivalry and the seeming constant betrayal—until the big one during the election of 1800. Also the pain of realizing he was, and would always be, the villain in our history.

That's the thing that was surprising in Chicago: feeling the pain of being Aaron Burr. In the original, Miranda plays a sympathetic, sensitive Hamilton who wears his heart on his sleeve the way Miranda often does. He's all big sensitive eyes and overwhelming dramatic emotion. Cervantes' Hamilton is colder and more ruthless. It feels truer to the historical man but also less dramatic. We care less for Hamilton here, and more for Burr. I didn't cry when Hamilton's son died or when they sang “It's Quiet Uptown,” as I had done numerous time at home listening to the soundtrack; but I nearly teared up when Burr realizes the tragedy of his life. “Was I supposed to care so much about Aaron Burr?” my sister asked after the show. It was the play turned upside down. It makes me wonder what other variations there might be to this story that has lived with me for 18 months, and that I thought I knew so well.