Has any pop music act represented its times as much as the Beatles and yet remained as timeless as the Beatles? They were the biggest act of the 1960s; they defined it and altered it. They altered us—the way we dressed, wore our hair, what we smoked and thought; what we thought of this thing called rock ‘n’ roll. They helped change the name; they took out the roll and left the rock.

At the same time: “Yesterday,” “Let It Be” and “While My Guitar Gently Weeps” all feel fresh 50 years later.

I was born in January 1963, and when I was about 5 years old I was staying with family friends in Michigan. One day the mother was working in the kitchen and overheard me and her son, B.G., in the bedroom arguing. “Mine’s longer,” I said. “No, mine’s longer,” B.G. said. We kept going back and forth in this manner, and she kept growing increasingly worried, until one of us declared, “Well, if I pull mine, mine’s longer.” That’s when she decided enough was enough, and she stormed into the bedroom ... to find B.G. and me kneeling in front of the mirror and pulling our hair down toward our eyes. The Beatles brought that. Long hair stayed the cool thing for decades after they brought it over.

At the same time: “Help!,” “Here Comes the Sun” and “The Long and Winding Road.”

A shadow hanging over me 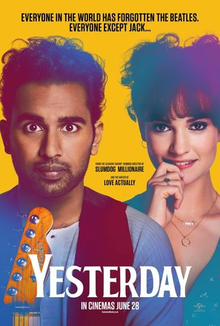 “Yesterday,” a magic-realism movie written by Richard Curtis (“Love, Actually”) and directed by Danny Boyle (“Trainspotting,” “Slumdog Millionaire”), is better than I thought it would be. Some of the relationships feel real enough. It’s got enough Boyle to make up for the Curtis.

Jack Malick (Himesh Patel) is a struggling musician playing nowhere gigs around Lowestoft in Suffolk County, England. He's managed by longtime friend Ellie Appleton (Lily James), who is obviously in love with him. He just as obviously doesn’t seem to notice. Or maybe he thinks shagging his manager is too #MeToo. Or maybe he’s just got his eyes on the prize—singing his songs and playing his music. Trouble? His songs aren't that good. “Summer Song,” his standby, is good enough to make you pause for a second but then it just dissipates around you. It’s actually the perfect song for his status. You get why it’s his standby and you get why he’s going nowhere.

Indeed, he’s about to give up—just declared so to Ellie—when there’s a worldwide power outage. It’s like the world is rebooting, and in the sudden dark, biking home, Jack is hit by a bus and flies through the air. I assume it’s the flying through the air that saves him, or unalters him, because when he wakes up in the hospital, sans two front teeth, the world is altered. Slightly. I like the slightly. So British. A Hollywood movie would have him waking up in a world in which the NAZIS won World War II, but here it’s just little things. Well, not really “little.” It’s that life is the same, but there’s no cigarettes, Coca-Cola, or the Beatles.

The Beatles thing he realizes first. In the hospital, he makes a lame “When I’m 64” joke but Ellie doesn’t get it. Why 64? she asks. He doesn’t get why she doesn’t get it. Later, with their friends, she presents him with a new guitar—his got smashed in the bike accident—and while his joshing friends request “Summer Song,” he decides that a beautiful guitar deserves a beautiful song and plays “Yesterday.” Ellie tears up. Where did THAT come from? she asks. He’s confused all over again. He tells them—Paul McCartney, Beatles—but they don’t know it or them. In fact, they think he’s bragging about the song he wrote:

Carol: Well, it’s not Coldplay. It’s not “Fix You.”
Jack: It’s not bloody “Fix You,” Carol, it’s a great, great work of art.
Carol: Wow, somebody suddenly got very cocky.

The movie’s tag line is about how Jack is the only one who remembers the Beatles but it’s more than that; they never existed. His Beatle albums are all gone—Bowie’s there, but not them—and there’s nothing on Google, just the bug with the double e. Poof. Did they just play some gigs in Liverpool and Hamburg and that was it? Did they never get to Hamburg? Did John and Paul never meet? We don’t know. Just that. Poof. Gone.

All this creates what Jack calls “a dilemma.” Should he pretend he wrote all these songs, or ... Or nothing, it turns out. The “or” is never explored. Instead, he writes down as many of their songs as he can remember and begins playing them and taking credit for them.

I love the indulgence of family and friends here, who think they’re getting the next “Summer Song.” My favorite scene may be when he tries to play “Let It Be” for his parents and keeps getting interrupted—friends come over, phones ring—and they keep messing up the title: “Leave it Be”; “Let Him Be.” He’s trying to get them to hear greatness and they’re not hearing it.

That’s actually one of the unspokens in the film: How most people don’t recognize greatness. It’s not just family and friends. An Ipswich TV host is mostly amused by Jack, who works in a warehouse; and so even as Jack plays “In My Life,” beautifully, the host doesn’t hear the beauty and keeps joking about the day job. It’s up to the few who hear, and know, to push Jack up and out: first, a local producer, Gavin (Alexander Arnold, who could play Stephen Merchant’s handsomer son); then Ed Sheeran, who taps Jack to open for him on a worldwide concert tour. They go to Russia, where Jack plays—seemingly out of nowhere—“Back in the U.S.S.R.,” which goes viral, and which nobody really questions. There’s a toss-off about the anachronistic use of “U.S.S.R.” but nothing further. Like: Is it an anti-Putin message? Suggesting Russia under Putin is the same as the old Soviet regime? That might’ve been fun to go there. But the movie doesn’t.

Instead, Jack winds up under the wing of Sheeran’s nefarious manager, the too-aptly named Debra Hammer (Kate McKinnon), who wants him to put out a double album. Despite being the talent, Jack is led along, stunned. His output is finite, after all—not even the entire Beatles’ oeuvre, just the stuff he remembers—so he should parcel it out, a few songs a year, rather than all at once. But he’s passive. He even lets Ed Sheeran change “Hey Jude” to “Hey Dude.” Admittedly a funny scene, but c’mon. Stand up for Paul here. Or Jules.

The further Jack rises, the more guilt-ridden he becomes. He also loses Ellie. Because he’s shagging women all over the world? Nah. She just kinda drifts away. She feels like she’s not needed and winds up with someone who needs/wants her: Gavin. Meanwhile, we see two people—a man in Russia and a woman in Liverpool—who keep eyeing Jack suspiciously, as if they know where this music came from. They do. And together they visit Jack backstage—they present a yellow submarine as a calling card—and confront him about it. (How do these two find each other, by the way? The movie never answers that.) What I like is they’re not villains. They’re not even angry; they’re grateful that he’s brought the Beatles music back. They missed it so. They also present him with a scrap of paper with an address on it. I knew immediately what it was. It’s shocking Jack hadn’t pursued it.

It’s John Lennon’s address. John (Robert Carlyle), 78 now, lives by the ocean and does his artwork and seems completely cool with how his life turned out. There was no Mark David Chapman shooting, of course, because there were no Beatles. It’s quite poignant. This John is less rebel John, not to mention hoodlum John, than peacenik John. He’s wise. He doesn’t know who Jack is but he gives him life advice:

You want a good life? It's not complicated. Tell the girl you love that you love her. And tell the truth to everyone whenever you can.

Great advice ... which just happens to speak to the movie’s immediate dilemmas: Jack’s been lying to the world while never telling the girl he loves that he loves her. So he does both at the 11th hour. Before a huge concert crowd, he admits he didn’t write the songs he’s been singing—that four guys named John Lennon, Paul McCartney, George Harrison and Ringo Starr wrote them. Everyone boos. (You know crowds.) But then he says he’s going to upload his album to the internet so everyone can listen to it for free. Everyone cheers. (You know crowds.) And in front of this huge crowd, with her beautiful face up on the big screen, he tells Ellie that he loves her. Everyone cheers again. Even Gavin. Sap.

But what dreck. Does it have to be before a huge crowd? Does love not matter unless millions see it? Besides, does he really love her? We do—it’s Lily James, she’s fuckingn adorable—but he’s been blinkered throughout. I don’t really trust his 11th-hour conversation.

That said, Patel is great as Jack. He sings beautifully and seems lost, humorously lost, for much of the movie. Lily James is lovely as ever but given little to do. I liked Joel Fry as Rocky, Jack’s ne’er-do-well friend who becomes his roadie. Sheeran was both good and a good sport. McKinnon was over the top.

Looks as though they’re here to stay
So it's not bad but it's not enough. It's better than “Summer Song” but not nearly “Let It Be.”

Example: When Jack owns up and mentions the four Beatles by name, I'm curious what happens next. Does the media descend upon John, Paul, George and Ringo? Are they all alive? If so, what do they say? What could they say? “He’s a bit daft, really. John was me mate 60 years ago, and we palled about in a skiffle group and wrote some thingees, but that’s it. I’m a retired teacher now. Never even heard of Ringo. Sounds like a cowboy.” The movie gives us John, but it doesn’t even ask about Paul, George or Ringo.

And shouldn't you tell the rest of the world that data went missing? Shouldn't you gather the historians? “For some reason, you have Pepsi, but the original thing that’s based on, Coca-Cola, is gone. You have the Rolling Stones, but the original thing that’s based on, the Beatles, they’re gone.” It’s like a knockoff world. Original content doesn’t seem to matter. It's like Google’s algorithm.

Shit, I haven’t even gotten to causality yet. That's the part I figured would bug me most and it did. The Rolling Stones were a band from London who didn’t even think about writing their own songs until they saw John and Paul, already famous, go into the corner of a restaurant and knock out one in 30 minutes. That’s when they went “We can do that,” and did. So in this alt-universe, what caused the Stones to wake up? What caused them to wear their hair in the Beatles/Astrid fashion, or to make it in the U.S. when no British rock band had the temerity to do so? How are the Stones still the Stones? How is Bowie still Bowie? How do you have all the things that followed the Beatles without the Beatles?

You know the butterfly wings that cause the hurricane on the other side of the world? Losing the Beatles is losing the hurricane. The ramifications would be endless.

Oh, and the world never is righted again. The movie just leaves us with a few of their songs. It leaves us with Jack playing “Obla-di Obla-da” before a group of kids, who sing along. That's our happy ending. Life goes on, bra.