Remember all of those aging decrepit scouts in “Moneyball” who didn’t know shit compared with the sabermetric whiz kid with the computer (Jonah Hill)? Well, they’re back, but this time they’re the heroes. Indeed, the lead scout is played by one of the most iconic figures in Hollywood history (Clint Eastwood), while the sabermetric whiz kid is played by the asshole who cuckolded George Clooney in “The Descendants” (Matthew Lillard). Consider it “Moneyball II: Revenge of Not Nerds.“

There’s great irony in all of this, which I’ll get to by and by.

Estranged daughters
Eastwood hasn’t acted in a movie since “Gran Torino” in 2008, and he hasn’t acted in a movie he didn’t direct since Wolfgang Petersen directed him in “In the Line of Fire” back in 1993. So what’s he doing in this piece of crap? Did some big-name director lure him in? Hardly. This is Robert Lorenz’s first movie as director. But Lorenz was assistant director on 26 pictures, including eight of Clint’s (“Mystic River” and “Million Dollar Baby,”), so I assume Eastwood’s thanking him or throwing the kid a bone. 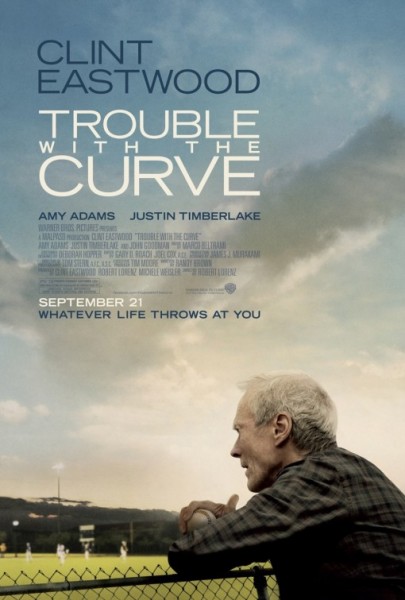 Or maybe Eastwood was drawn in by the script? It’s another estranged daughter tale, and Clint likes those. He likes being trailed after by young, smart, talkative women who allow him to do his incredulous, almost Vaudevillian slow burn. Think Tyne Daly, Genevičve Bujold, Bernadette Peters, Rene Russo, Laura Dern, Hilary Swank.

Now it’s Amy Adams as Mickey (named for Mantle), whom Gus (Eastwood), a legendary scout in the Atlanta Braves organization, more-or-less raised himself when his wife died young. Well, “raised.” Now and again, he shunted her off to relatives, which is why she’s in therapy and has trouble committing to men. But at least she’s a top-notch lawyer on the partner track. Unfortunately the name partners at her firm are led by Bob Gunton, the guy who played the asshole warden in “Shawshank Redemption,” so you know she’s going to get the old scroogie, even though it’s 2012 and the law firm doesn’t yet have a female partner. Like it’s 1981 or something. Like it’s a Hollywood studio or something.

Gus, who signed anyone worth a damn in the Braves system (Ralph Garr, Dusty Baker, Chipper Jones, Tom Glavine), is in his 80s now, and there are these nerdy sabermetricians hanging around with their computers, and, oops, his ophthalmologist diagnoses him with macular degeneration just as the organization sends him to North Carolina to scout a potential first-round draft pick. Does he fess up? Nah. He goes. But Director of Scouting and good friend Pete Klein (John Goodman) sends Mickey after him even though she’s, you know, estranged and all, and needs to close a big deal to make partner. But she goes, fuming and checking her Blackberry.

While in North Carolina, they run into Johnny (Justin Timberlake), a former flame-thrower whom Gus scouted back in the day, but who tore his rotator cuff after being traded to the Boston Red Sox. He’s now scouting for the Sox, and, for some reason, despite being a newbie, and despite wanting to be an announcer, he’s the guy the Sox trust to check out their potential No. 1 draft pick. Seems everyone is after this kid.

Who is he? Bo Gentry (Joe Massingill). And we quickly find out the following:

Gus and Mickey stay at The Grey Squirrel Motel, run by a nice Hispanic woman who has two sons: one about 8, the other, named Rigo (Jay Galloway), about 18 going on 25. At one point, Rigo, selling peanuts at the local stadium, has to toss some to Bo, who’s being an asshole, and he throws them pretty hard.

See if you can guess where this is going.

Yeah, it goes there.

Gus, with macular degeneration, hears that Bo has trouble with the curve, which is confirmed by Mickey, who sees his hands drift. So Gus counsels against Bo, and even tells this to Johnny, his rival, and the Sox pass on Bo; but the Braves’ GM, Vince (Robert Patrick), ignores both Gus and Pete Klein, assumes Shaggy the Sabermetrician is right, and picks tubbo. The Sox, thinking they’ve been cuckolded, fire Johnny, which leads Johnny to think Gus and Mickey tricked him, which leads to scenes and recriminations and revelations—including the real reason Gus shunted off Mickey to relatives. For some reason this doesn’t bring father and daughter closer together. But it allows Mickey the moment to hear, and then see, and then catch, Rigo, the nice, flamethrowing Hispanic kid; and it’s Mickey who brings him to Turner Field to face Bo, who is hitting batting-practice pitches into the stands for the local press. It take Rigo all of five pitches (two fastballs, three curves) to dismantle the Braves’ No. 1 pick. In the process, Rigo is compared to 1) Sandy Koufax, 2) Steve Carlton and 3) Randy Johnson, and Mickey, who, yes, got the old scroogie from the warden at Shawshank, becomes Rigo’s agent. Johnny returns, he and Mickey kiss, and we get our happy, Hollywood ending.

It’s a long, slow trek to the obvious. It’s painful.

Yet these scouts are creatures of habit. They sit in their same seats, go the same dive bars, and, one assumes, check into the same motels.  Which means Gus, and maybe some of the other old-timey scouts, have hung out before at The Grey Squirrel Motel. And they never noticed the hulking lefthander, close cousin to Sandy Koufax, playing catch with his little brother?

The stats vs. scouts argument is an ongoing one among baseball nerds. I’ve written before that I think Billy Beane, the protagonist of “Moneyball,” was right in adopting the sabermetric lessons of Bill James, but wrong in interpreting the lessons of his own life, including his aversion to scouting. I’ve written that a more balanced approach between the two is probably the best approach. But one area where the Moneyball people have it over scouting people? “Moneyball” was a Major League movie. This thing can’t hit its way out of A ball.